Startling surveillance footage showed the moment that two men, who were harmlessly chatting, very nearly became injured, or worse, when a winter hazard came falling from the sky seemingly out of nowhere.

An icicle was caught smashing the windshield of a car after falling from the 15th-floor of a building in Harbin, China, on Nov. 17. No one was injured in the incident.

Icicles are beautiful creations of nature, but they can also be extremely dangerous hazards, something that two men in China found out when a piece of ice shattered the windshield of a car while they stood just feet away.

The video, which was taken in the snowy city of Harbin, located in China's northern province of Heilongjiang, shows what appears to be a large icicle suddenly dropping out of the sky and slicing clean through a car's front windshield like it was a sheet of paper. The vehicle's owner, known only as Mr. Bai, was standing beside his vehicle and chatting with the owner of a local car wash. The men appear to look up after hearing the chunk of ice break free, moments before it hits the windshield. 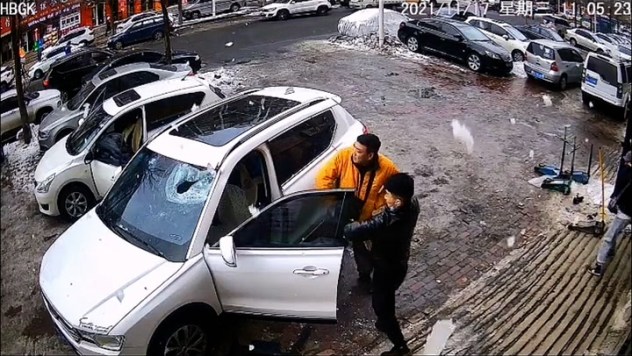 Despite dangerous shards of ice and glass ricocheting around the car, no one was injured in the incident. Because the ice fell from a local high-rise building, the building's property management agreed to pay over 80 percent of the car repair costs.

AccuWeather Senior Forensic Meteorologist Steve Wistar said the use of surveillance cameras has led to more icicle-related injury cases in recent years, making building owners more liable than ever if they do not act quick enough to remove icicles.

"Building owners have a legal duty to keep the public areas of their property safe and free from any hazards, including icicles," he said. "There have been a number of deaths of people unfortunate enough to be on a sidewalk at the moment that a large icicle falls from above. The greatest risk is below high-rise buildings since an icicle will speed up as it falls to the ground." 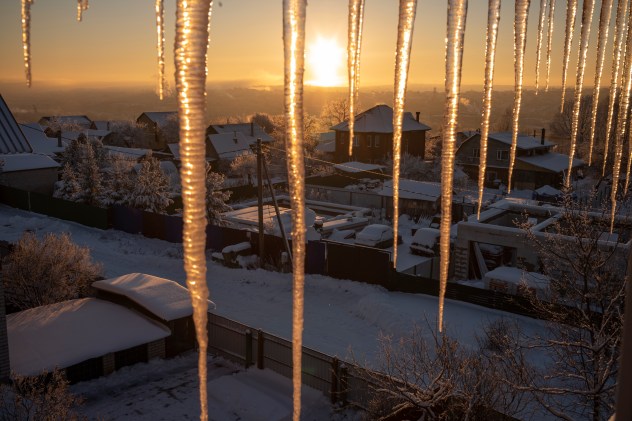 This is not the only time in recent memory that shards of ice have been caught on tape smashing into cars. In 2020, a massive snow and ice storm nearly killed one man in Vladivostok, Russia. A security camera captured footage of the man scraping snow and ice from the windshield of his parked car. A small chunk of ice hits the car, then the man, apparently hearing a frightening noise from above, abruptly stopped and looked up before fleeing just in time. A second later, a huge frozen concrete slab came crashing down on the vehicle, leaving it in total ruins. Miraculously, the man escaped unharmed.

While many choose to admire icicles, they should not be admired from below, as they are potentially deadly hazards. The Snow & Ice Management Association (SIMA) reported that over a dozen reported deaths per year can be blamed on falling ice from buildings.

"Reports claim at least 15 people in the U.S. die from falling icicles each year," SIMA shared in 2016. "Falling icicles can become weapons, particularly if falling from higher elevations on buildings, awnings, etc."

Homeowners are encouraged to remove icicles from their property and take proactive steps to limit their formation.

"Nothing can be done about the melting from sunshine, other than physically removing snow from the roof, but the better a building is insulated under the roof, the less heat will be able to melt the snow from below," said Wistar. "So, step one in preventing icicle problems is good quality construction with plenty of insulation between the heated living space and the roof."