The hidden dangers of icicles growing on your property

Besides the obvious dangers of injury, or worse, if icicles fall where people walk, the sight of them may indicate other issues -- and should spur property owners to action.

Few things are more picturesque and capture the essence of winter like the sight of dangling icicles. Glistening on a tree branch or fence post, they may seem beautiful. But hanging off the side of your house?

After the outburst of winter weather across the Northeast and Midwest in recent days, icicles may be a rather common sight around the country at the moment.

Icicles clinging to the side of a property can signal trouble in a wide variety of ways. Whether it's the obvious danger of them falling on anyone below or the tell-tale sign that a home may be in need of maintenance, the sight of them should spur owners to act.

AccuWeather Senior Forensic Meteorologist Steve Wistar explained that icicles mainly form from the melting of snow that has accumulated on a roof and the subsequent freezing of the meltwater, in places such as the eave of a roof or a gutter. 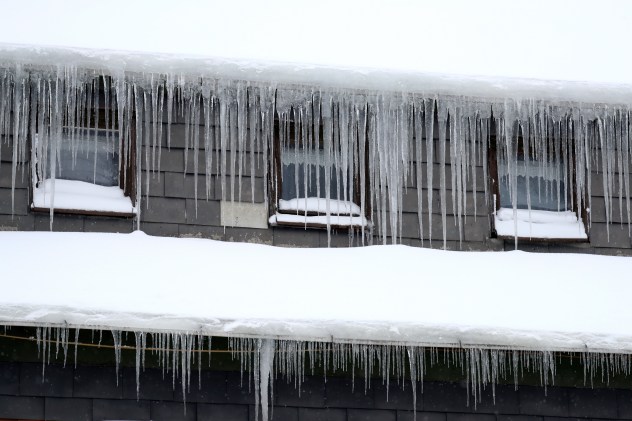 Icicles form on a window outside a house in the Thuringian Forest near Gehlberg, Germany, Saturday, Jan. 16, 2021. (AP Photo/Matthias Schrader)

You'll often find icicles forming when that snow is melted by direct sunshine then refrozen when air temperatures dip below freezing.

But you could also find icicles when heat escapes from inside your home and melts that snow from the interior. That's when worries should arise, Wistar said.

"Nothing can be done about the melting from sunshine, other than physically removing snow from the roof, but the better a building is insulated under the roof, the less heat will be able to melt the snow from below," he said. "So, step one in preventing icicle problems is good quality construction with plenty of insulation between the heated living space and the roof."

While not every icicle formation represents poor construction quality or a need for massive renovations, Wistar said that some building owners wisely apply substances such as electrical heat tape to the roof's eave in order to provide extra warmth along the edge of a roof, thus preventing the freezing of the meltwater.

So why is it so important to prevent that refreezing and icicle formation in the first place? 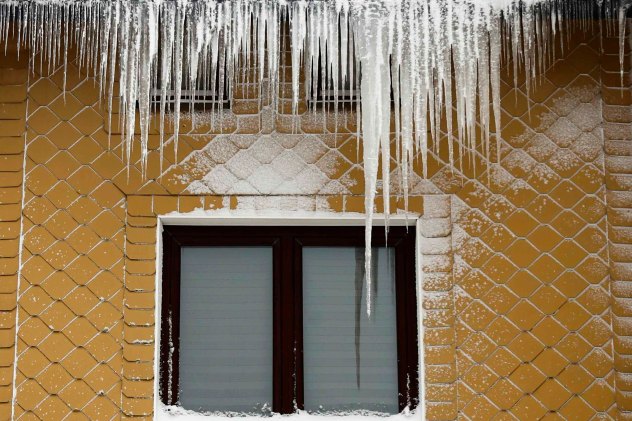 Icicles form on a window outside a house after a heavy snowfall in Oberhof, Germany, Wednesday, Jan. 13, 2021. (AP Photo/Matthias Schrader)

Because they could be killers.

Although falling icicles not an overly common cause of fatality, the Snow & Ice Management Association (SIMA) reported that over a dozen reported deaths per year can be blamed on falling ice from buildings.

"Reports claim at least 15 people in the U.S. die from falling icicles each year," SIMA shared in 2016. "Falling icicles can become weapons, particularly if falling from higher elevations on buildings, awnings, etc."

The association pointed out that, "If you’re tasked with removing these hazards, make sure you cordon off the area to ensure pedestrians don’t walk into the path of operations."

Such icicle-falling dangers forced the closure of multiple streets in New York City in 2014, when a brief warmup led to icicle projectiles rocketing toward the ground from the top of the 1 World Trade Center building, a drop of 1,776 feet, according to The New York Times.

In 2017, a man in Midway, Utah, was killed by falling icicles while he was cleaning a building's window. According to local fire officials, the chunk of ice was estimated to have weighed at least 700 pounds. 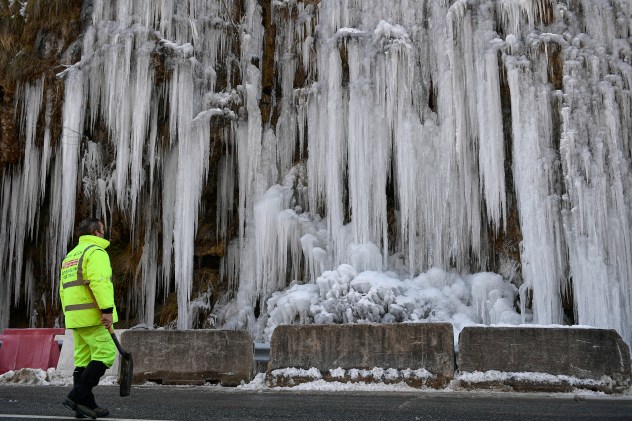 A worker walks close to icicles hanging from a wall frozen by low temperatures after a heavy snowfall, in Roncal Valley, northern Spain, Tuesday, Jan. 12, 2021. Much of Spain struggled in the aftermath of a massive snowfall that hardened into ice and turned streets and roads into safety hazards in areas unaccustomed to extreme winters. (AP Photo/Alvaro Barrientos)

Wistar said favorable weather conditions and the size of a roof are both factors that can inhibit large icicle growth.

For homeowners, a simple household item could be a life saver.

"When this is seen to be happening, a building owner can use a long handled tool to knock the icicles off before they become especially dangerous," Wistar said. "The person doing this work needs to make sure they are well away from where the icicle will fall as icicles can become quite heavy over time. Knocking off the icicles is especially important when they are hanging over an area where people walk."

If property owners don't tend to icicle growth, they could be in for even more trouble than just insulation repair. They could be violating their legal duty. 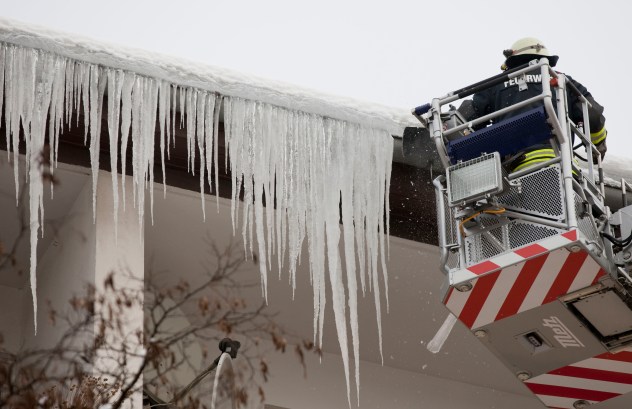 A fire fighter uses a turntable ladder to reach the roof rail of a house and to remove icicles in Berlin, Germany, Thursday, Dec. 30, 2010. For Berlin temperatures around minus 20 degrees Celsius (-4 degrees Fahrenheit) are announced for the upcoming night. (AP Photo/Gero Breloer)

Wistar, who is an expert in legal proceedings and has testified in many cases about weather occurrences, said the use of surveillance cameras has led to more icicle-related injury cases in recent years, even further increasing the liability of a building owner.

"Building owners have a legal duty to keep the public areas of their properly safe and free from any hazards, including icicles," he said. "There have been a number of deaths of people unfortunate enough to be on a sidewalk at the moment that a large icicle falls from above. The greatest risk is below high-rise buildings since an icicle will speed up as it falls to the ground."

And, on a lighter note, Wistar added one more hidden danger that can come from icicles, although this one doesn't have anything to do with them injuring someone.

"You really don’t want to suck on a fallen icicle since it was probably formed from water running off a roof where birds had pooped some time prior," he said.