At the Kinzua Bridge State Park in northwestern Pennsylvania, you can get very close to the damage left behind when the railroad bridge that stood 301 feet tall took a direct hit by a tornado in July 2003.

Part of the remaining bridge was made into a skywalk that allows us to stand 225 feet above the ground and look down at the destruction (we hope you aren’t afraid of heights!). The other end of the bridge was left untouched, and you can see the rails that were pulled and twisted as the tornado swept through:

The Kinzua Bridge Viaduct was the highest railroad bridge in the world when it was completed in 1882, according to the state park. It was first built of iron, but as trains got bigger and heavier, the bridge was rebuilt out of steel in 1900 – it then weighed 6.7 million pounds!

In addition to the bridge being used for train traffic, people were allowed to walk across the span up until the summer of 2002 (just a year before the tornado hit). Inspectors had found that the sections of the steel towers had rusted through, making it dangerous for people and trains to cross the bridge.

Work to repair the bridge started in February 2003, but that came to an end when the tornado swept through. The debris left behind in this state park allows us to see firsthand the true power of tornadoes.

On the morning of July 21, 2003, the Kinzua Bridge Viaduct stood 301 feet tall over a creek in northwestern Pennsylvania. By the end of the day, this steel railroad bridge that weighed around 6.7 million pounds was reduced to ruins after taking a direct hit by a tornado.

Eleven pillars of the bridge were ripped from their concrete foundation and tossed onto the ground – a sight that you can still see to this day by visiting Kinzua Bridge State Park. The park converted part of the remaining bridge into a 225-foot-high skywalk that overlooks the destruction, and you are allowed to walk down in the valley and get close to the destroyed pillars. 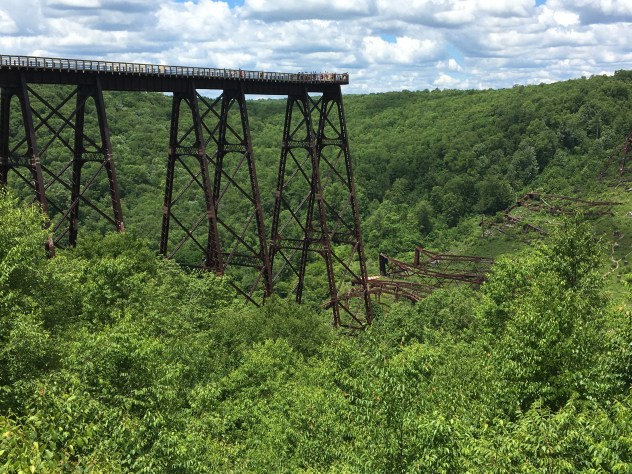 The skywalk at Kinzua Bridge State Park allows visitors to overlook the towers that were brought down by the devastating tornado. (Photo/Kristina Pydynowski)

Want to see the true power of this tornado but can’t make a trip to northwestern Pennsylvania? AccuWeather Summer Camp has you covered, as we take you on a virtual excursion into the park:

Look at the photos of the 11 destroyed pillars of the Kinzua Bridge Viaduct that lay across the valley floor in northwestern Pennsylvania. How strong do you think the tornado was that caused all of this damage back in July 2003? Remember, the state park told us that the bridge was made of steel and weighed about 6.7 million pounds.

Are you thinking maybe a tornado that had an EF4 or EF5 ranking? Actually, it was an F1 tornado with winds of 73-112 mph that destroyed the bridge (this tornado occurred before the Enhanced Fujita Scale was used, that is why there isn’t an “E” in front of F1). This proves that all tornadoes should be taken seriously, and you need to seek shelter as soon as a tornado warning is issued for your community.

Tornadoes can also occur anytime of the year when all of the ingredients on a tornado recipe card are present. However, there are certain times of the spring and summer when tornadoes tend to hit parts of the United States more often than the rest of the year. Want to know when that time is where you live? Find out by listening to this AccuWeather Podcast:

⚡ August 26 - Shocking Truth: It’s not your car’s tires that protect you from lightning

We are going to dispel one of the many lightning myths today – some people think that it’s the rubber tires of your car that keep you safe from lightning.

Remember that your car has to have the metal frame all around it – an open cab of a tractor, golf cart or any construction equipment will not protect you from lightning. A convertible car, even with the top up, is also not safe to be in! 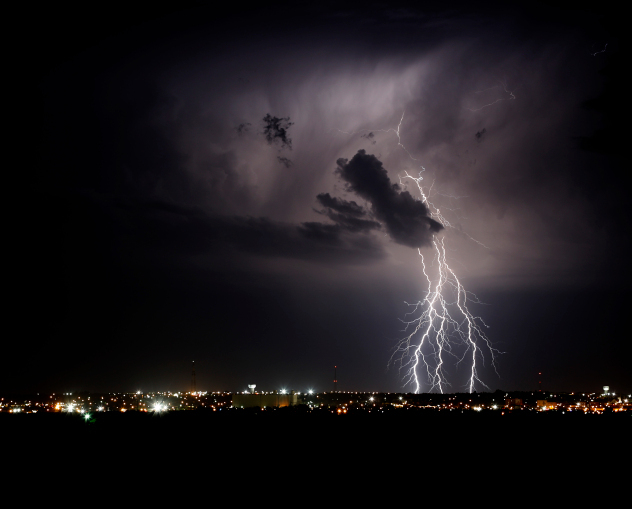 🔎 August 26 - Weather Detectives! Does cracking your car windows help on a hot day?

We know that cars can get much hotter than the outside air temperature on a sunny day, so many people crack the window a little bit to let the heat out. However, how much does that help? The answer below may surprise you:

If you only crack the window a little bit, it really doesn't make a difference. The car will still get dangerously hot inside for any kids or pets adults leave behind for a quick trip into a store or house (and that can happen really fast).

So, what if we left the windows cracked a little more? We tried this experiment again with the windows down about two inches (five centimeters) and on a day when there was a little more of a breeze to help move the air around. Look at what we found – and the air temperature outside was in the middle to upper 70s F (near 25 C). 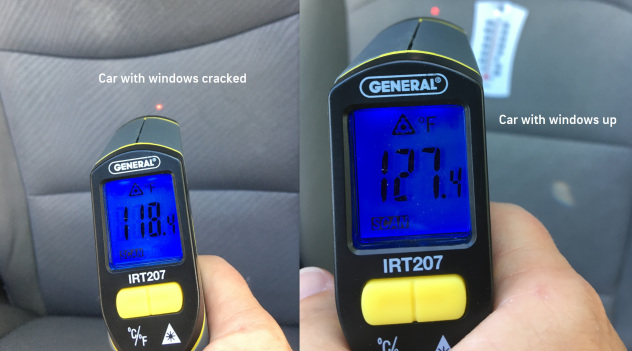 So, the safest thing for any adult to do with kids or pets in the backseat is always bring them inside on sunny days in the spring or summer.

🔥 August 26 - Campfire Tales: Forget the campfire and use the sun to make s’mores!

Do you love eating s’mores? If you don’t want to wait until the evening to start a campfire and make these yummy treats, have the sun do the work!

All you need is a dark-colored shirt, a glass pan, the ingredients to make s’mores and a sunny day:

Not only did we get to enjoy a tasty snack, but we see how strong the sun is. It wasn’t a very hot day when the sun cooked these s’mores – the high temperature was near 80 degrees Fahrenheit (27 degrees Celsius). Much like how a greenhouse works, the glass holds in the warmth from the sun and allows the marshmallows to cook and get all gooey.

Your car can also turn into a greenhouse with its windows up and no air conditioning on during the late spring or summer. That can make it very dangerous for any kids or pets left behind as an adult runs inside for a quick errand.

You may know that the sun rises in the east and sets in the west – but if you pay close attention to sunrise and sunset, you will notice that the sun doesn’t rise and set in exactly the same place. The changing path of the sun through the sky is why your shadow will grow and shrink each day and through the year:

If it wasn’t for the tilt of the Earth on its axis, we wouldn’t have seasons and changing shadows!

🏃🏽‍♀️ August 25 - Race Time! Why does baking take longer in the mountains?

If you have a friend in Denver, Colorado, or in any place that is high up in the mountains, ask them how long it takes to bake a birthday cake – the answer will be longer than anyone who lives in a lower elevation.

Why do you see the following on the back of cake or brownie mixes or in other recipes? The reason has to do with the air around us! 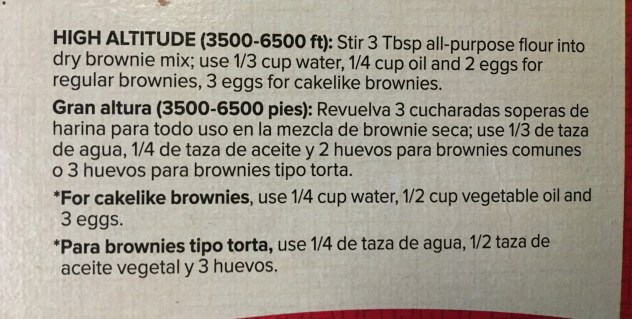 The key is that air pressure is lower the higher you climb up a mountain. What does that have to do with baking a cake? In higher mountains, water doesn’t boil at 212 degrees Fahrenheit (100 degrees Celsius) like it does in most other places.

It will boil at a lower temperature – when the air pressure is less, it’s easier for tiny bubbles of water vapor to rise to the surface. Water boils at 203 F (95 C) in Denver and about 160 F (71 C) on the top of Mount Everest, according to Penn State professors Dr. Jon Nese and Lee Grenci.

Water boiling at a lower temperature does not mean your cake will cook faster – it’s actually the opposite! The liquid inside that cake batter may evaporate quicker, causing the cake to be too dry or cook unevenly. You may have to alter the recipe or add more minutes to your timer to get the perfect birthday cake! 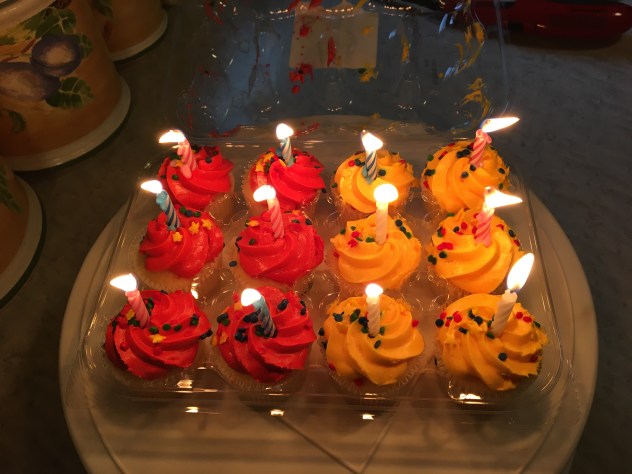 🔥 August 25 - Campfire Tales: How to help your tree during a drought

We learned earlier how trees will lose their leaves early if it’s a drier-than-normal summer. Just like you can ask an adult for help if you are thirsty and can’t reach the sink, we can help trees get enough water during a drought – but here’s an important tip to learn before you water your trees:

If your community is also dealing with a drought, remember to follow the advice of local officials if any water restrictions are in place. Plus, don’t forget to make sure you are drinking enough water a day!

🔎 August 24 - Weather Detectives! Why are leaves changing in August?

Check out these photos that were just taken of the trees in a yard in central Pennsylvania. Look at how many leaves are on the ground to rake up and jump into – you would think that it’s fall than late August, right?

The middle or end of October is usually when leaves in this area turn vibrant colors of yellow, orange and red before falling off of the trees. So why are the leaves changing colors now? First, let’s find out why that happens in the fall:

The reason the leaves in the photo above are changing is because central Pennsylvania is in a drought, so there is not as much water in the ground as normal for the trees to get a good drink. That causes trees to become stressed, leading to leaves wilting and falling off much sooner than normal.

We talked earlier about how odd it is for leaves to be changing color and falling from trees in late August. What would you think if you saw snow this time of year? Definitely unusual!

As we listen below in the AccuWeather This Date in Weather History podcast, snow fell in Cut Bank, Montana, just a few days after temperatures soared to 90 degrees Fahrenheit. It wasn’t just a little dusting of snow – 8 inches of snow allowed kids to make snowmen!