Trucker opens up about being stranded on interstate in big snowstorm

A major early-season storm buried parts of the Intermountain West in feet of snow, and truck driver Mauricio Melendez found himself caught in the big storm -- and then talking to AccuWeather reporter Bill Wadell.

Drivers told AccuWeather's Bill Wadell they're worried about the effect interstate shutdowns due to snow could have on already struggling supply chains across the country.

Truck driver Mauricio Melendez didn't think he'd have to start using his backup winter supplies as early as mid-October. And yet, as the snow piled up Tuesday into Wednesday in Buffalo, Wyoming, and closed down several interstates, the 80 bottles of water and the soup Melendez packed away proved that it hadn't been too early to prepare for winter.

The Texan was making his way from Washington State to Denver to deliver a load of lumber and thought to try his luck at taking Interstate 25 to avoid any issues with the winter weather impacting road conditions. Then the stretch of road between Buffalo and Casper was closed, stranding Melendez, his truck and the company product overnight. His other plan had been to take Interstate 80 -- a stretch of which in Wyoming also ended up closing down due to deteriorating weather conditions.

Buffalo, Wyoming, saw roughly 20 inches of snowfall on Tuesday within 24 hours, with other locations such as Pony, Montana, receiving up to 28 inches of snow within the same timespan. A yardstick had been required to measure the snowfall.

The first widespread snowstorm of the season layered the Intermountain West in a thick blanket of snow over the weekend and into the first part of the week, and thundersnow had even been reported amid some areas. 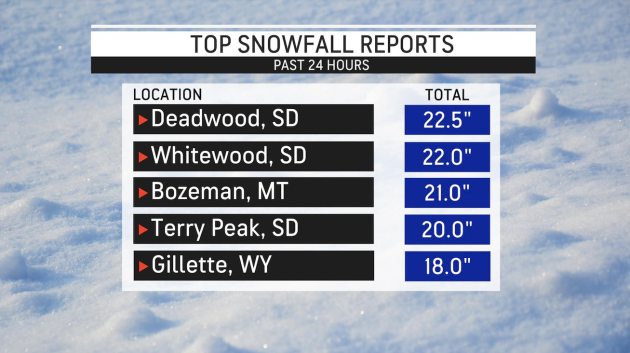 Snowfall totals across the Intermountain West as of late Wednesday afternoon.

While Melendez told AccuWeather National Reporter Bill Wadell he has seen worse conditions in his driving days, this was the worst he has seen in terms of crews being unable to adequately clear the roads.

"I've been through worse where your truck rocks back and forth and nothing says 'closed.' You actually keep moving and you drive like that for 10 to 15 [minutes], but you're trying to get to your destination because products need to get there," Melendez said.

Melendez said he had been asked to take photos as a way to document the conditions to the company whose cargo his truck was carrying, though he worried worsening road and weather conditions could bring the blame down on other truck drivers. From here on out, he said, he plans on staying around Texas.

"And hopefully it doesn't get this [bad] over there either because then truckers get blamed for this. 'Where's my product?' 'Where's my stuff?'" Melendez said. "Look around, you know? We're stuck."

Crews reopened a 50-mile stretch of I-25 around Wednesday afternoon after a nearly 24-hour closure, though other portions of the interstate along with potions of I-80 and I-90 in Wyoming remain closed.

The stretch of highway on I-90 between Buffalo and Gilette, Wyoming, had also been closed, catching many off guard as the traffic alerts failed to make it to some smartphone apps, Wadell reported.

Omaha resident Darren Lytle was one of the many travelers who quickly found out that he had not, in fact, started out early enough to beat the storm. He had been hoping to make it back from Yellowstone when the storm hit. With hotels in the area booked, the options of where to stay were severely limited.

"We were at the gas station and a lady came in and asked if she could stay in the parking lot because there were no hotel rooms available," Lytle told Wadell.