A yardstick was needed to measure snow in one part of Montana, and the disruptive storm proved “irritating” for one motorist in the middle of a 20-plus-hour drive.

The first big snowstorm of the season led to major travel issues in Wyoming, but also helped with the wildfire fight in parts of neighboring Montana.

Autumn is in full swing across the United States with Halloween candy filling the shelves at grocery stores and pumpkin spice-flavored beverages being served up at coffee shops across the country. But one region just had a full-scale preview of winter.

The first widespread snowstorm of the season blanketed the Intermountain West over the weekend and through the first part of the week, causing disruptions from the mountains of Montana to the rim of the Grand Canyon.

AccuWeather National News Reporter Bill Wadell was in Montana for the storm where some trees were still sporting vibrant foliage amid the wintry scene.

The storm left behind more than a winter wonderland.

Over a foot of snow blanked parts of the northern Rockies, including the higher elevations of Montana and Wyoming. Thundersnow was even reported amid some intense bursts of snow.

A yardstick was required to measure the accumulation in Pony, Montana, where snow totals approached the 30-inch mark in just 24 hours. 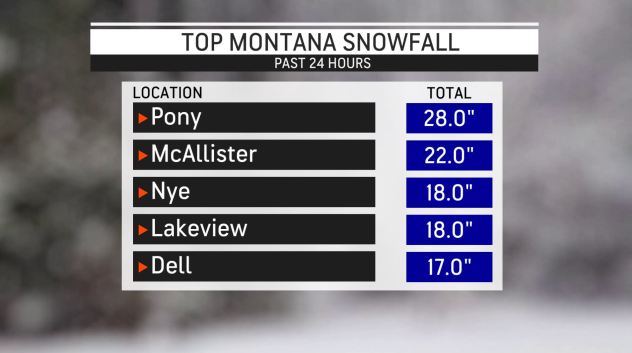 Traffic through mountain passes, such as Bozeman Pass in Montana, ground to a halt at times as poor road conditions clogged the roads for a time. Traffic was flowing again at Bozeman Pass by Tuesday afternoon, although the snow was still slowing down some traffic.

A 50-mile stretch of Interstate-25 reopened on Wednesday after being closed for almost 24 hours due to the winter storm, Wadell reported. Some sections of Interstates 25, 80 and 90 remained closed in Wyoming as of late Wednesday morning.

In Buffalo, Montana, Wadell caught up with Spokane, Washington, resident Sonia Lasoya, who was hitting plenty of wintry hurdles in her cross country drive to Uvalde, Texas. In Buffalo, off of Interstate 90, Lasoya saw those travel plans run into closed road signs due to the heavy snow.

"It is irritating because I’ve got 20 more hours to go yet, so now hopefully they’ll open the road, but we don’t even know if they’ll open it," she said.

With a bag full of clothes packed for the warm weather of Texas, Lasoya said she wasn't totally prepared to have to spend a night stuck in the cold grip of an early-season storm.

"I had this coat, which is really warm. I didn’t really pack warm clothes because it's like 85 down there in Uvalde," she said. "I'm not really ready for winter yet, but up in Spokane they kind of start to winterize early… I guess I’m in denial."

In other areas of the region, colorful leaves still clung to trees, wreaking power outage havoc for some. Sheridan, Wyoming, resident Phil Jackson told Wadell that seeing the mix of fall foliage and wintry precipitation was an uncommon alignment, but something he felt prepared for.

"It's not something we normally get every year in October, but it can happen and it’s something to be prepared for," Jackson said. "Because a lot of the leaves are still on the tree, that’s the big deal, it’s usually the heavy wet spring type snow that can cause some havoc, but it can happen."

Jackson told Wadell that his house, along with many of his neighbors, lost power as "6 to 8 inches" fell, although he said it was hard to measure because of how quickly it melted on the ground.

After such a sweltering summer, he added, the quick turn to winter was a shock, but not all that unwelcomed. 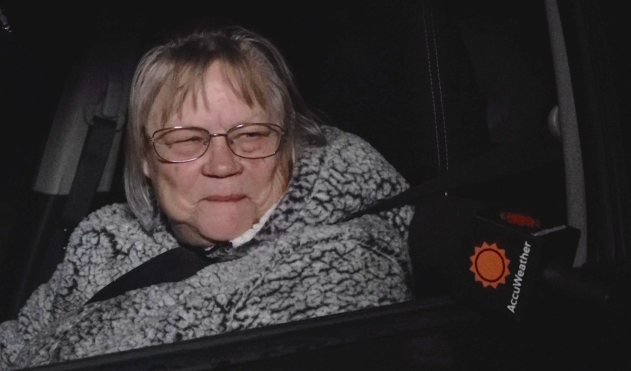 Sonia Lasoya told AccuWeather National Reporter she was in the midst of a cross-country drive from Washington to Texas when the snowstorm snarled her travel plans. (AccuWeather/Bill Wadell)

Yellowstone National Park was one of the more mountainous areas that saw snow with the steam from Old Faithful blending into the snowy scenery surrounding the famous geyser.

Over 500 miles to the southwest, snow was also accumulating at the rim of the Grand Canyon with park officials warning visitors of snow-packed and icy roads on Tuesday morning.

The same system responsible for the snow also sent chilly air across the region. No daily record lows were broken, but temperatures did dip as much as 15 to 30 degrees Fahrenheit below normal.

The mercury in Missoula, Montana, dipped down to 17 F early Tuesday morning, the lowest temperature in the town since Feb. 28.

It was not quite as cold in Salt Lake City, but residents had to bundle up when stepping outside on Tuesday morning when AccuWeather RealFeel® Temperatures bottomed out at 20 F.

The early-season snowstorm may have been disruptive, but it did have some benefits.

“Some people are not ready for this blast of winter weather, but the snow and cold is a welcome relief for fire crews that have been battling wildfires out here for weeks,” Wadell said.

The rain and snow are also a step in the right direction to help with the widespread drought across the interior West, although this storm was just a drop in the bucket for what is needed to end the long-term drought.