Bursts of heavy snow and howling winds abruptly turned a 50-mile ultramarathon into an urgent search and rescue operation amid "near whiteout conditions," with some of the competitors suffering from hypothermia.

Whiteout conditions during the DC Peaks 50 ultramarathon caused 87 people to be rescued in Davis County, Utah, on Oct. 9.

The course for the inaugural DC Peaks 50 aimed to take runners through some of the highest peaks and toughest trails in Davis County, Utah, packing 12,000 feet of climbing to go with 10,000 feet of descent. The starting gun went off at 5 a.m. Saturday morning and the race more than lived up to its billing as "a tough course" as the event's website describes it, due to an outbreak of wintry weather.

The first call for help came from weather-compromised runners at 9:30 a.m., local time, as howling wind and heavy snow created "near-whiteout conditions," according to the Davis County Sherrif's Office. By the end of the day, the race had been called off and 87 participants had to be rescued from the treacherous conditions.

At the time, runners such as Kelcey Stowell were about 8 miles into the race when things took a turn for the worse.

“As it got colder and colder, it was getting scary,” she told The New York Times. “The snow was getting so deep, we couldn’t see the trail. It was coming down like hail, and my hood froze to my face.” Temperatures plunged as low as 20 degrees, according to ABC News, and winds gusted 30 mph to 40 mph. 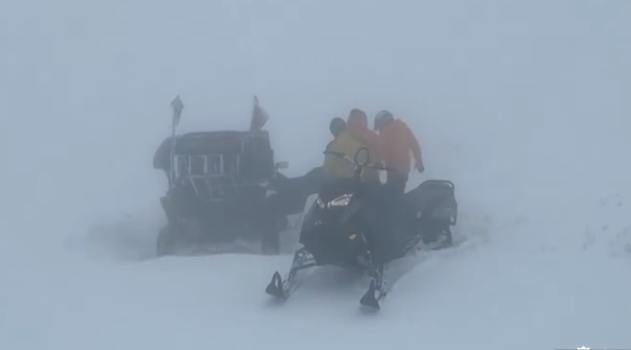 Search and rescue personnel reached the stranded runners on foot, by snowmobile and by 4x4 during Saturday's rescue. (Facebook/Davis County Sheriff's Office)

According to Stowell's UltraSignup profile, a website that serves as an ultramarathon and trail running results platform, unfamiliarity with the area's terrain was certainly not her downfall. Since 2019, she has completed 10 different trail races in the state, including three ultramarathons in Utah this year alone.

"It was really, really scary. There were a group of about 15 with me and I was saying, ‘I’ve never been this cold in my entire life,’” Annie MacDonald, one of the rescued runners, told ABC News. “We were talking to each other saying ‘I can’t feel my feet, they feel frozen, but we just have to keep moving.’”

“The search and rescue unit told me that I didn’t have much time left when they found me, so that was very scary,” he said. “The runners that did help me, they probably saved my life.”

Running in the cold puts a cruel twist on an already grueling event for racers of any experience level. As ultramarathon veteran and expert Bryan Powell told AccuWeather earlier this year, all race strategies can get tossed out the window when the temperature plummets.

"In 2018, I ran the White Mountains Challenge in Alaska, right around the spring equinox. The race is on snowmachine trails in the bottom of a valley," Powell said shaking his head at the memory. "It was 26 below zero and let me tell you, don’t mess up cold. Because you’re out there all alone and if you mess up? It’s not very long until you have nothing left to mess up."

Thankfully for the 87 athletes, the rescuing came crucially quick.

The Davis County Sheriff’s Office said that personnel from the search and rescue team scavenged the trail by foot, utilized four-wheel drive vehicles and rode snowmobiles to track down the runners. The search ended by 2:45 p.m. with every participant accounted for, according to a statement.

Video shared by the sheriff's office depicted not only the howling wind but also the wall of gusting snow, making even the nearby snowmobiles difficult to see.

“The runners experienced extreme weather conditions, with 12-18 inches of snow and near-whiteout conditions,” the sheriff's office statement read. “Venturing onto the mountains, trails, and bodies of water at this time of year can be dangerous because the weather changes rapidly and conditions can quickly become life-threatening. Even a mild rain in the valley can translate to blizzard conditions at higher elevations,” Davis County Sheriff Kelly Sparks added in the statement.

According to AccuWeather Meteorologist Joe Curtis, the snow was not only heavy but persistent.

"As runners ventured up the Wasatch Mountains and reached higher altitudes, they were faced with heavy snow, which greatly reduced visibility," he said. "The changing weather conditions led to hypothermia for some runners who were unprepared. Eventually, the snow accumulated so much that it became impossible for participants to complete the race, so the ultramarathon was called off."

Along with the multiple cases of hypothermia among the athletes, one participant was injured from a fall. According to The New York Times, the final rescuer didn't get down from the mountain until 7 p.m. due to treacherous conditions on the trails.

Race directors Jake Kilgore and Mick Garrison had been planning the event for two years and had coordinated with the United States Forest Service to plan the route, which featured six aid stations. 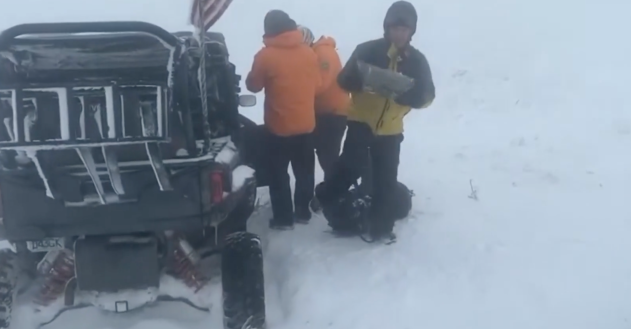 Despite the disappointing and nearly tragic ending, Kilgore called the day a success thanks to the rescue efforts.

“It was raining at the starting line," Kilgore told the Times, referring to the dramatic and swift changes that occurred as competitors made their way along the course and encountered the rough weather. In an interview with ABC News, Kilgore said his role had to shift as abruptly as the weather did -- from race director to first responder.

AccuWeather Chief Meteorologist Jonathan Porter said this situation is an important reminder for people participating in outdoor activities and also those in charge of outdoor activities to always check weather forecasts and monitor weather conditions before venturing outdoors. He said conditions can change quickly, which can catch people unaware of weather risks off guard – especially when outdoor events are occurring in the mountains, where weather conditions can be vastly different in one area versus another.

"For an event like an ultramarathon occurring in the mountains, where part of the extra challenge is running in sometimes thousands of feet of elevation change, weather conditions can go from relatively mild with a calm wind and no precipitation to gusty winds with dangerously cold temperatures and near zero visibility in snow in a short period of time," he said.

Porter added that situations like Saturday's race highlight the need for outdoor events of any size to utilize the expert forecasts of professional meteorologists, who can provide localized and highly accurate weather forecasts and warnings to event organizers, allowing them to make the best decisions whenever weather is a factor.

"Our AccuWeather For Business division has special expertise in supporting tens of thousands of outdoor events every year – and we know from our experience that event planners having a weather safety plan, understanding the risks and having the most accurate forecast greatly enhance safety," Porter said. "The AccuWeather RealFeel® Temperature, available for free on AccuWeather’s website and mobile apps, is also a great resource to help prepare for changing outdoor conditions."

Even after the race was canceled Saturday, Kilgore told the Times that runners were emailing him to ensure their safety and to say “they all are excited to come back next year.”