The aurora borealis dipped into the northern Plains on the night of Oct. 11, dazzling residents of North Dakota.

A stunning light show graced the northern skies of the United States during the early hours of Tuesday morning following a geomagnetic storm.

From Alaska to Montana to Maine, the lights from the aurora borealis danced across the sky in a dazzling display of colors. Vibrant greens were plentiful, though auburn lights hovered over Lake Erie while gold and pink pillars of light danced over the horizon west of Cedar Rapids, Iowa.

Onlookers watched in amazement as the lights swirled across the night sky, and many took to social media to share the stunning photos and videos. A video tweeted by @WxUnrated captured the sense of awe at the spectacle as one of the skygazers can be heard exclaiming, "Dude, what in the world!"

An equally stunning video from Vincent Levina features silence amid a jaw-dropping display of the northern lights.

The storm that sparked the aurora was given a G2 intensity by the NOAA Geomagnetic Storm Scale, which runs from one to five with five being the strongest, and was caused by a coronal mass ejection (CME), according to AccuWeather Meteorologist Andrew Johnson-Levine. A CME is a large and sudden release of energy and matter from the outer layers of the sun. Solar flares, such as the one from Saturday, Oct. 9, usually accompany the events.

In an explanation as to the difference between the two, NASA likens CMEs and solar flares to a fired cannon. The solar flare is like the muzzle flash while a CME is more akin to a cannonball.

The solar flare that hurled the CME Saturday was rated as an M-class. Solar flares of this category are the second-strongest, only behind X-class flares, according to NASA. They have the potential to cause brief radio blackouts at the poles as well as minor radiation storms that could endanger astronauts when in their path. 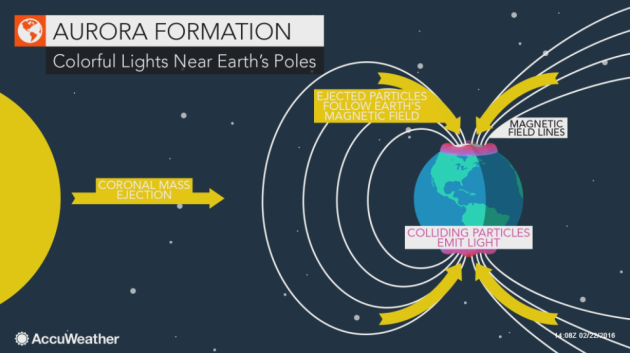 "As a result of the storm, the northern lights, also known as aurora borealis, were seen in portions of the northern United States," Johnson-Levine said. "In the Upper Midwest, calm and clear weather allowed the auroras to be seen as far south as central Minnesota."

Typically, a G3 or higher storm would be needed to cause aurora displays farther south in the United States, he explained.

Stronger geomagnetic storms can and have brought the northern lights into southern portions of the U.S., such as during 2011 when the lights were spotted as far south as Arkansas, Johnson-Levine added.

Monday night into Tuesday morning was the peak of the event for the Lower 48 as the incoming solar energy decreases throughout the day.