Teddy was a gift to Naomi Pascal before she met her adoptive parents in Ethiopia. She carried him around everywhere until she lost him at Glacier National Park. This is the story of how he got back.

Glacier National Park, at 1,583 square miles of wilderness, is a tough place to find a lost item, let alone a treasured one. But thankfully for a little girl named Naomi Pascal, who has carried around her teddy bear "Teddy" almost everywhere since she was adopted from Ethiopia at the age of 1, Glacier's dedicated team of park rangers kept Teddy safe until he was able to return home.

Teddy had been given to Naomi as a gift from her new parents while she was at an orphanage in Ethiopia, waiting for them to come to pick her up. Since then, Teddy has been an extremely well-traveled bear, going back to Ethiopia before visiting Rwanda, Croatia, Greece and locations all over the United States before getting lost in Glacier National Park.

In early October 2020, the family had hiked the famous Hidden Lake Trail in Montana's Glacier National Park, and they were nearly an hour away from the park before realizing that Teddy was gone. 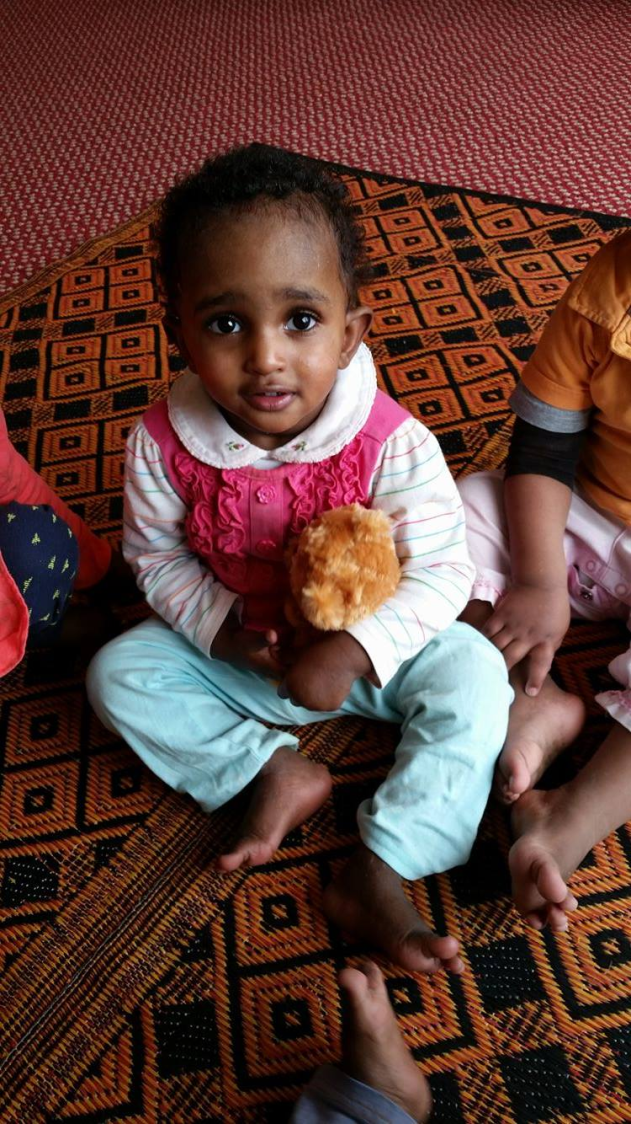 Naomi with Teddy when she was 1 year old in Ethiopia in May 2016. (Ben Pascal)

"It was the end of the day, it was getting dark, and Naomi remembered she left Teddy somewhere and she didn't know where," her father, Ben Pascal told AccuWeather National Reporter Jillian Angeline. Before they could go back for the bear, it began to snow, and the family knew they had little to no chance of finding it before spring.

The teddy bear had sentimental value not just for Naomi, but for the whole family.

"[The bear] was a way for us to connect with Naomi before we were able to go to Ethiopia and meet her in person and bring her home, so we have felt like it has been a little bit of a placeholder for our relationship with her, so I was really sad," said Addie Pascal, Naomi's mom.

Addie added that it was the couple's first gift to Naomi and likely the first toy she ever owned.

"She was very sad. We were all sad," Ben said. "We all just felt horrible about it," he added. "We didn’t think we would find it again."

The family posted on Facebook about the lost teddy bear over the summer, holding out hope that someone would find it. In fact, another park visitor took a photo of the bear hours after the family lost it, but didn't learn that it belonged to Naomi until the girl and her bear were reunited. 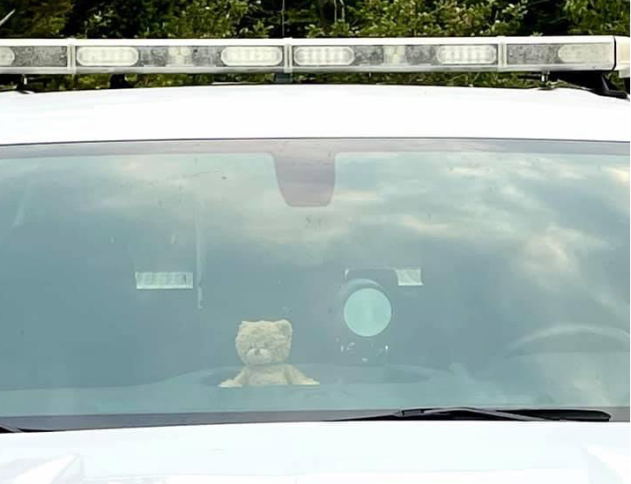 Teddy became the mascot of Ranger Tom Mazzarisi's patrol car after he was found in Glacier National Park. (Ben Pascal)

Thankfully, as the park rangers cleaned up the trail after winter, they found a sopping wet teddy bear buried in the snow. Normally, the bear would have been thrown out, but Ranger Tom Mazzarisi decided to adopt the bear, giving it the name Caesar.

"Bears are my passion. I just didn't have the heart to throw it away. There was something special about this teddy bear," Mazzarisi said.

Mazzarisi, who monitors real-life bear activity in the park, which is known for its grizzly and black bears, turned Caesar into the mascot for his patrol, employing him to keep an eye out for his fellow bears. The duo traveled across the park's mountainous terrain, identifying wildlife, escorting bears and helping keep people safe all year long. 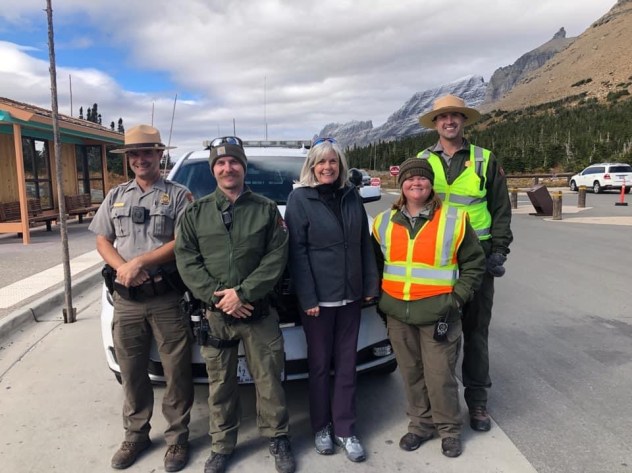 The park rangers at Glacier National Park helped to bring Teddy back home to Naomi, along with family friend Terri Hayden. (Ben Pascal)

Nearly a year later, a family friend of Naomi's went to Glacier National Park just after the beginning of fall and happened to see Ceasar sitting in a patrol vehicle at a park trailhead. The friend, Terri Hayden, was with the family when Naomi had lost the treasured bear, and when Hayden saw the teddy bear in the patrol car, she sent a picture to Naomi's mom.

Addie replied, “That’s it! Go get it!” Mazzarisi was not working at the park that day, though, leaving it up to the intrepid team of rangers to free Teddy from the vehicle, delivering Teddy directly to Naomi's family friend in Apgar, Montana.

"They got Teddy out of the car, and Teddy was reunited," Mazzarisi said. "I was really happy for the girl because it was a pretty sentimental thing."

Nearly a year after thinking Teddy had been lost forever, he was reunited with his long-time travel partner Naomi, now 6 years old. The bear was sent back to the family in a pink velvet bag that read National Glacier Park on it, and the bear had a new accessory: a park ranger badge.

A video of the moment that Naomi got Teddy back after almost a year. (Ben Pascal)

After having her treasured companion returned to her, Naomi was overjoyed -- and the family captured the reunion on video.

"It made me feel happy," Naomi said.

Meteorologist reunited with wallet lost half a century ago
Widower shares remarkable story of recovering a photo lost in Sally's wind
'It's happening': Ice worms emerge in Pacific Northwest glaciers