Power outages and substantial travel delays may be in store due to the wind event.

The same storm poised to trigger severe weather to parts of the southern United States from Tuesday to Wednesday will bring a blast of high winds as colder air sweeps from the Midwest to the Northeast, AccuWeather meteorologists warn. The wind event could not only trigger power outages, but could lead to substantial travel delays as the associated colder air may lead to snow and a freeze-up in some locations.

More than 125 million people from the Midwest to the Northeast could face disruptive wind gusts from the powerful storm system.

The storm will strengthen rapidly as it swings from the Colorado Rockies on Monday night to Lake Superior Tuesday night. The plummeting barometric pressure and circulation generated by the storm will be enough to cause winds to become quite strong and gusty, both ahead of a trailing cold front and in its wake. 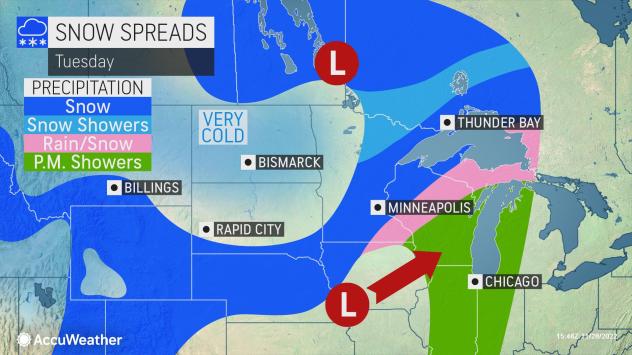 Southerly winds will kick up ahead of the push of colder air on Tuesday over the Mississippi Valley and along the mid-Atlantic and New England coasts Tuesday night to Wednesday. Winds can be strong enough to lead to a period of minor coastal flooding at times of high tide in the Northeast. The strong southerly winds will help fuel severe thunderstorms from the South Central states on Tuesday to the Southeast region on Wednesday.

The strongest wind gusts outside of thunderstorm activity will occur near the proximity of the cold front and its wake.

Gusts frequenting between 40 and 60 mph are likely to spread rapidly eastward on Wednesday and Wednesday night from Minnesota, Iowa and Missouri to New England, New York, New Jersey, Delaware, Maryland and Virginia. At this force, tree limbs can break, weak trees can be blown over, and loose objects such as trash cans and recycling bins can become projectiles. Sporadic to regional power outages are likely. 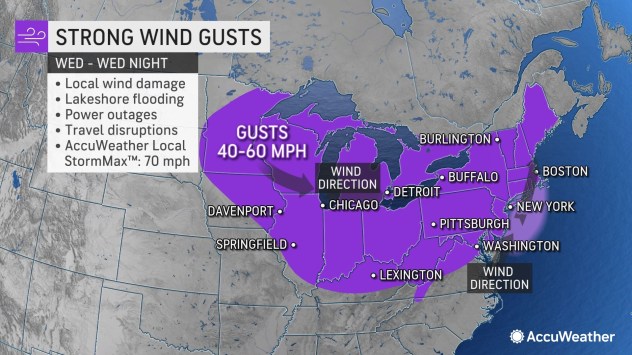 Travel problems may mount, with the risk of truck and trailer vehicle rollovers are possible. Low-level aircraft turbulence and flight delays are also possible. As the wind pushes water around on the Great Lakes, lakeshore flooding is possible on Lakes Michigan, Erie and Ontario.

"As this storm tracks from the western U.S. to the Midwest, a surge of bitter air from Canada will work its way in and make many areas feel more like the dead of winter rather than late November," AccuWeather Meteorologist Mary Gilbert said. 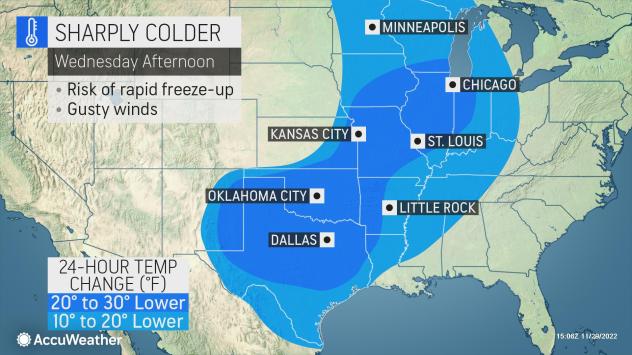 As the Canadian air sweeps in behind the cold front, temperatures will plummet 20-40 degrees Fahrenheit from Tuesday to Wednesday in the Heartland and from Wednesday to Thursday in the Northeast.

On the storm's cold side, "a significant, but rather slender, stripe of snow is set to spread from the Rockies into the Midwest from late Monday night through Tuesday night," AccuWeather Meteorologist Mary Gilbert. "The highest accumulations are anticipated to occur in the Colorado Rockies, with an AccuWeather Local StormMax of 20 inches."

The Denver metro area can expect anywhere from 1-6 inches of snow depending on location, with the greatest amounts toward the foothills to the west from late Monday night to Tuesday evening. As temperatures hover in the teens and lower 20s on Tuesday and dip into the single digits Tuesday night, wet and slushy areas will freeze and create icy conditions on area roads and sidewalks. 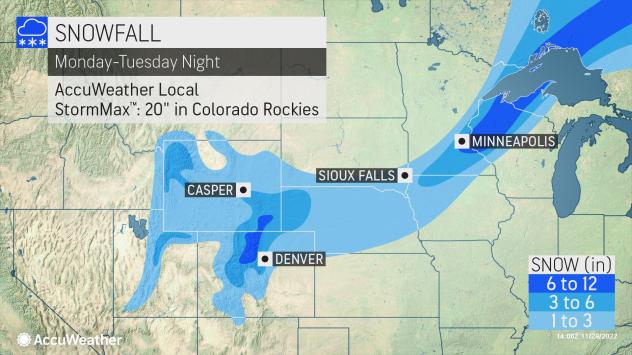 "By Wednesday, low temperatures may plummet within 10-15 degrees of record-level temperatures across the Rockies," Gilbert said. "Denver is forecast to get down to around 5 degrees early Wednesday morning. Denver’s record low for Nov. 30 is 10 degrees below zero."

The stripe of snow will extend some 800 miles to the northeast across parts of the northern and central Plains to the upper Great Lakes region from Tuesday to early Wednesday.

"Travel on portions of Interstate 90 from South Dakota to Minnesota could become tricky at times as snow accumulates and temperatures plummet," Gilbert said. Motorists should use caution and follow any restrictions set forth by local officials.

"A heavy amount of snow is possible, similar to that of the Colorado Rockies, across parts of Minnesota, Wisconsin and Michigan’s Upper Peninsula where 6-12 inches could accumulate," Gilbert said.

Wintry travel is in store for the Minneapolis metro area, where 4-8 inches of snow are currently forecast. Totals may be toward the high end of that range in the southern and eastern suburbs, with lower amounts toward the north and west. Regardless, as temperatures dip during the storm, road conditions will become snow-packed and slippery with deteriorating travel conditions into Tuesday evening.

At this time, no snow is forecast to fall on Chicago or Detroit from the storm, but any areas of standing water from rain earlier could freeze as colder air rushes in behind the storm. 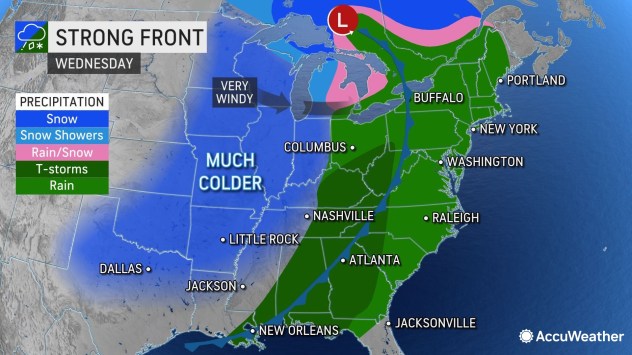 No snow is forecast to fall on the I-95 zone of the Northeast. But, a period of lake-effect snow is likely to ramp up as colder air blasts across the Great Lakes from northern Michigan to the central and northern Appalachians in the wake of the storm.

There is also the possibility for a brief period of accumulating snow and slippery travel with a rapid freeze-up over the interior Northeast prior to lake-effect snow over portions of the interstate 80, 81, 87, 90 and 99 corridors on Wednesday night.