Relentless wintry weather to bombard much of US into next week

Bernie Rayno is tracking another storm for the Northeast early next week, and he says there are two scenarios for how it could unfold.

If it feels like winter has been serving up more wild weather than usual lately, that's because it has been. According to AccuWeather meteorologists, this recent frosty stretch of snow, ice and frigid temps has been the most active winter weather pattern across the country likely since the mid-1990s. And that pattern is not letting up as several weather systems are lining up and threatening more snow and ice for the Midwest and Northeast through the end of next week.

Winter storms could arrive every two to three days amid the tumultuous pattern, which is due in part to a major buckling of the jet stream. The river of high winds aloft plunged southward over the central United States then swung up along the Atlantic coast in recent days, setting the path for storms to ride along. That active storm track will be fueled by the collision of Arctic air sprawling across the middle of the nation and milder air holding its ground in the Southeast.

Two systems will come into play during the next storm this weekend, including on Valentine’s Day in the Northeast. One storm was already sweeping across the Midwest early Saturday morning. Meanwhile, a secondary storm is expected to push northward up the Eastern Seaboard this weekend. 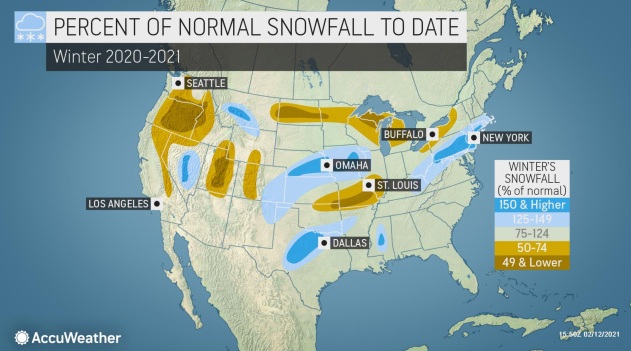 This graphic shows the percentage of snowfall that has fallen this season compared to averages for this time of year. (AccuWeather)

"Both weekend systems are forecast to remain weak with the snow portion of the precipitation on the nuisance end of the spectrum," AccuWeather Senior Meteorologist John Feerick said. "But even a light amount of snow and especially a thin coating of ice can lead to dangerous travel conditions."

In general, 1-3 inches of snow is expected from eastern Wyoming to the to the Lower Peninsula of Michigan, but heavier amounts of 3-6 inches will occur across eastern Wyoming, southwestern South Dakota and Nebraska, where an AccuWeather Local StormMax™ of 8 inches is predicted.

A few additional pockets of 3-6 inches of snow can develop around the Great Lakes as well.

The snow in this 1,500-mile-long swath will be light and fluffy due to the Arctic air in place. This type of snow can be highly subject to blowing and drifting in a mere breeze amid the frigid conditions. 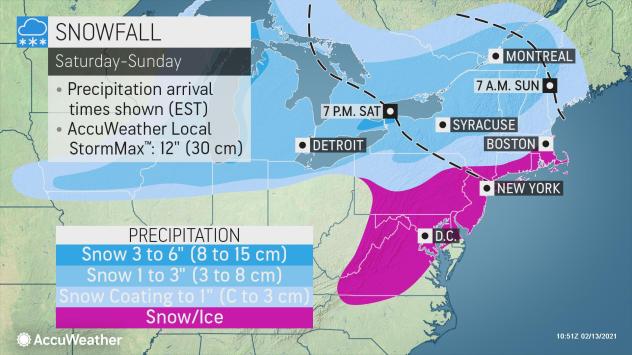 Farther to the east, most of the moisture associated with the storm pushing northward along the Atlantic Seaboard may stay out to sea.

Snowfall accumulations of 1 to 3 inches are expected from part of northern Virginia to Maine Saturday into Sunday, but as with any storm, pockets of somewhat heavier snow can develop with the risk of a few places ending up with 3-6 inches.

"Snow over much of this zone may be intermittent, where the rate of snow varies and even stops for a time," AccuWeather Senior Storm Warning Meteorologist Brian Wimer said. 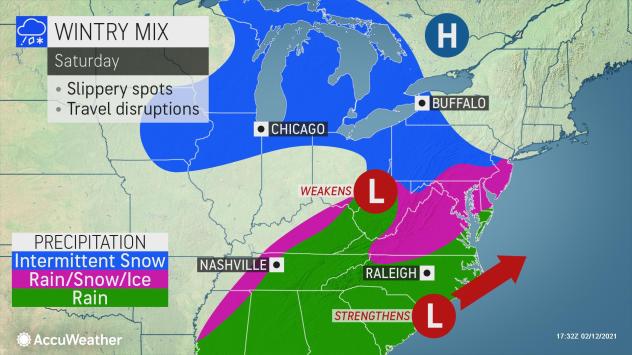 Milder air will cause a wintry mix that includes some ice to develop from portions of middle Tennessee to southern Ohio and southwestern West Virginia as well as from northwestern North Carolina to much of Virginia. The icy mix will expand over the Interstate-95 corridor and coastal areas of the East from central Maryland to southeastern New England.

Some areas struck by a major ice storm that cut power and led to treacherous travel late this week could once again get more ice from this storm.

Washington, D.C., Philadelphia, New York City, Pittsburgh and Boston are in the zone where a wintry or icy mix is forecast from Saturday to Sunday.

"There is a risk of 0.25 to 0.50 of an inch of ice to build up in parts of Virginia with the storm this weekend," AccuWeather Meteorologist Randy Adkins said.

"If that amount of freezing rain occurs, then larger trees may come down on power lines, leading to power outages," Adkins added.

As the storm finishes up in New England on Sunday, the next winter storm will already be producing a large swath of snow over portions of Texas and Oklahoma. That storm is then forecast to head northeastward next week. 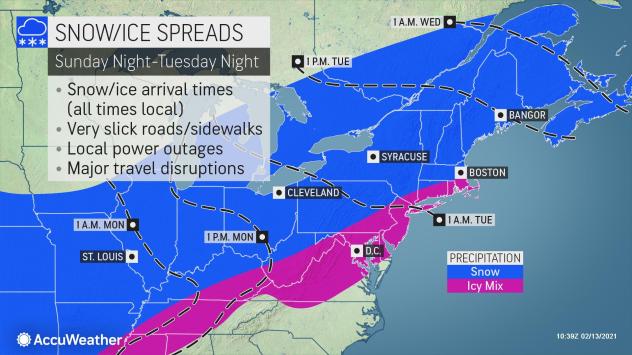 A light wintry mix, including some ice, is likely to persist from southern New England to the southern Appalachians and Piedmont areas of the Southeast from Sunday into Monday. That will occur even after the weak storm pair leaves the East ahead of the next storm's arrival.

"This means that icy conditions may continue in between storms from part of the interior South to the Northeast states this weekend into early next week," AccuWeather Lead Storm Warning Meteorologist Joe Bauer said.

"This light precipitation can be every bit as dangerous to drive and walk on as a major storm, and motorists and pedestrians should be on the lookout," Bauer added. 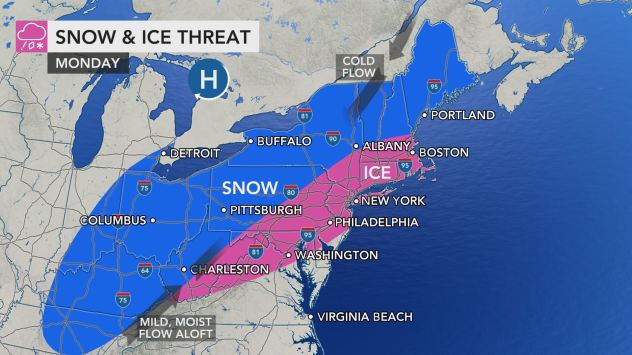 Since that south-central U.S. storm system is likely to be stronger than the weekend system, heavier precipitation, including snow and ice, is expected to unfold. However, it may be a complex setup with not just a snow or rain scenario.

Over a large part of the mid-Atlantic and New England regions, only a shallow layer of cold air may be in place. That means that a period of sleet and freezing rain is more likely, instead of just rain or snow.

A change to plain rain is most likely along much of the I-95 corridor, but precipitation is likely to start out as a period of ice at the onset in the mid-Atlantic and across southern New England, according to Rayno. 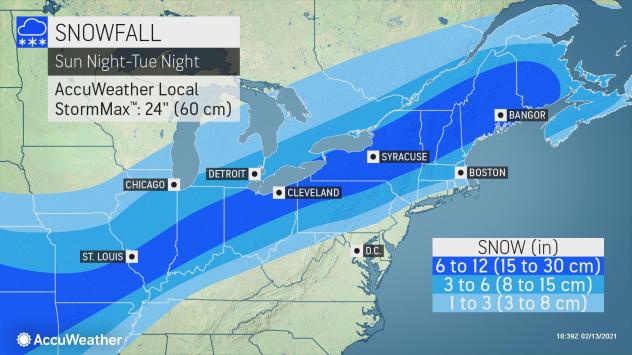 “There could be significant icing from parts of eastern West Virginia and northern Virginia to portions of northern Maryland, Pennsylvania, New York state and central and southeastern New England Monday night into Tuesday," Rayno said, adding that the biggest snowfall would likely occur north of the New York State Thruway and into parts of northern New England.

The storm predicted to shift northeastward from the South Central states will be weakening as it moves into the Ohio Valley on Monday night. Cold air may put up more of a fight in the Northeast as a result. 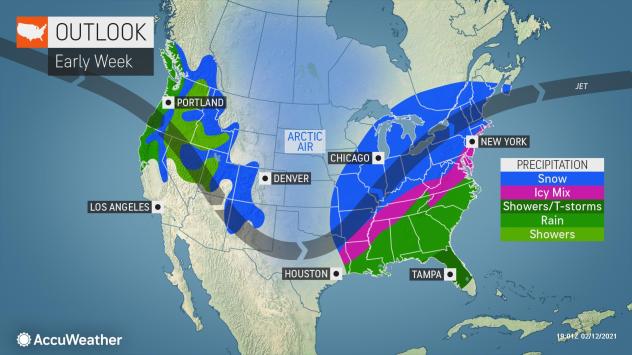 Should the layer of cold air be deeper as the secondary storm develops along the coast, then snow may fall farther to the south in the Northeast states. Precipitation could change from ice or rain to snow along part of I-95 on Tuesday in that case.

"Buckle up!” Rayno said, "because this will be a busy weather pattern right into next week. And there could be another weather system we’re tracking from the Northwest to the South Central states during the middle to latter part of next week."

In a case of atmospheric deja vu, yet another storm may dip southward over the Central states with snow and ice during the middle of next week, grab Gulf of Mexico moisture and head northeastward later next week.

Chicagoans gear up amid punishing stretch of subfreezing cold
Show your pet some love on Valentine’s Day with these 14 gift ideas
'Close to 60%' of US to have snow, ice on the ground by next week
Extreme winter weather upending vaccination efforts across nation