Kyoto’s shrines and famous temples were topped with snow as a big freeze hit large areas of Japan.

Staggering cold swept across eastern Asia at the beginning of the week, plunging temperatures to their lowest levels ever recorded in China. AccuWeather forecasters say the frigid conditions also moved through Japan and South Korea, where heavy snow also snarled travel.

The first day of the Lunar New Year on Sunday, Jan. 22, began with record-setting cold in Mohe, the northernmost city in China and nicknamed "China's North Pole." The city's 7 a.m. local time temperature was an exceptionally low 63.4 degrees Fahrenheit below zero (53 degrees Celsius below zero), which broke the nation's previous cold record of 62.1 degrees F below zero (52.3 degrees C below zero). That national record had stood since Feb. 13, 1969.

Video footage from Mohe appeared otherwordly as freezing fog dimmed the sun and caused ice to form on the outer layers of residents' clothing. One reporter cracked an egg on an iron shovel amid the teeth-chattering cold, causing the white and yolk to freeze instantly upon contact with the metal surface.

Videos from the Chinese city of Mohe show just how cold it is, as a 53 below zero Celsius temperature breaks a record for the city’s coldest ever.

Twelve other weather stations in the Heilongjiang province where Mohe is located reported temperatures near or below record levels over the weekend, according to Bloomberg. 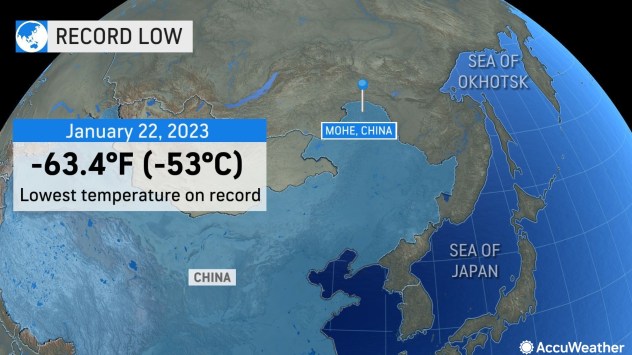 AccuWeather Lead International Forecaster Jason Nicholls noted that this latest cold shot in eastern Asia was on the radar of AccuWeather meteorologists since the beginning of last week.

"Arctic air that had been sitting over eastern Siberia much of last week was displaced southward across eastern China, the Korean Peninsula and Japan into Taiwan Sunday through Tuesday," Nicholls said.

This Arctic burst is what sent record-low temperatures across northern China to begin the week. The biting cold eased a bit as it swept farther east into Japan, but here, forecasters say the frigid air has generated a significant sea-effect snow event. This weather phenomenon occurs under similar atmospheric conditions to lake-effect snow events.

"Moderate to heavy sea-effect snow is expected to continue in some areas through Thursday, local time, across western Hokkaido and western Honshu," Nicholls said. Several feet of snow are likely by the end of the week.

The snow has already turned deadly in Japan. On Wednesday, officials said that a man died in Oita after being hit by a fallen tree, and additional deaths were being investigated in Okayama that may be related to the extreme cold. Observations indicated that more than 7.5 inches (19 centimeters) of snow had fallen in parts of Japan since Tuesday morning, and temperatures had dropped as low as 4 degrees Fahrenheit below zero (16 degrees Celsius below zero). 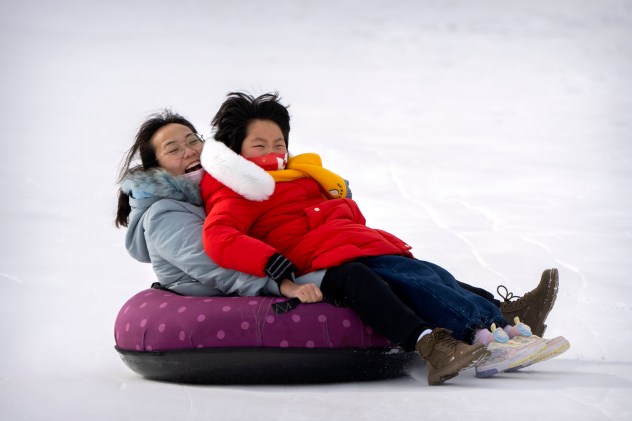 A woman and a child wearing a face mask slide down a snow-covered hill on an inner tube at a public park during the Lunar New Year holiday week in Beijing, Thursday, Jan. 26, 2023. (AP Photo/Mark Schiefelbein)

While conditions had improved by Thursday, more than 100 flights were canceled on Tuesday at airports in line to receive the worst of the sea-effect snow, according to The Japan Times. Make-up flights were scheduled on Wednesday in Japan and South Korea to return stranded travelers back home, especially from the resort island of Jeju, where tourists were celebrating the recent lunar new year.

The Japan Meteorological Agency said temperatures amid the cold snap could drop to levels experienced only once every 10 years and warned of frozen pipes and power outages. Fortunately, some relief is on the way. "The Arctic air will begin to lift out of China and Japan on Friday, and much milder weather will arrive for next week," said Nicholls.