Temperatures on Greenland haven't been this warm in at least 1,000 years, scientists report

Researchers drilled ice cores to analyze how the climate crisis has impacted the island country over the years. The more they drilled, the further they went back in time.

Researchers discovered that at every point inspected on the Northeast Greenland Ice Stream’s glaciers, they were found to be accelerating.

(CNN) -- As humans fiddle with the planet's thermostat, scientists are piecing together Greenland's history by drilling ice cores to analyze how the climate crisis has impacted the island country over the years. The further down they drilled, the further they went back in time, allowing them to separate which temperature fluctuations were natural and which were human-caused.

After years of research on the Greenland ice sheet -- which CNN visited when the cores were drilled -- scientists reported Wednesday in the journal Nature that temperatures there have been the warmest in at least the last 1,000 years -- the longest amount of time their ice cores could be analyzed to. And they found that between 2001 and 2011, it was on average 1.5 degrees Celsius warmer than it was during the 20th century.

The report's authors said human-caused climate change played a significant role in the dramatic rise in temperatures in the critical Arctic region, where melting ice has a considerable global impact.

"Greenland is the largest contributor currently to sea level rise," Maria Hörhold, lead author of the study and a glaciologist with the Alfred Wegener Institute, told CNN. "And if we keep on going with the carbon emissions as we do right now, then by 2100, Greenland will have contributed up to 50 centimeters to sea level rise and this will affect millions of people who live in coastal areas."

Weather stations along the edge of the Greenland ice sheet have detected that its coastal regions are warming, but scientists' understanding of the effects of rising temperatures there had been limited due to the lack of long-term observations. 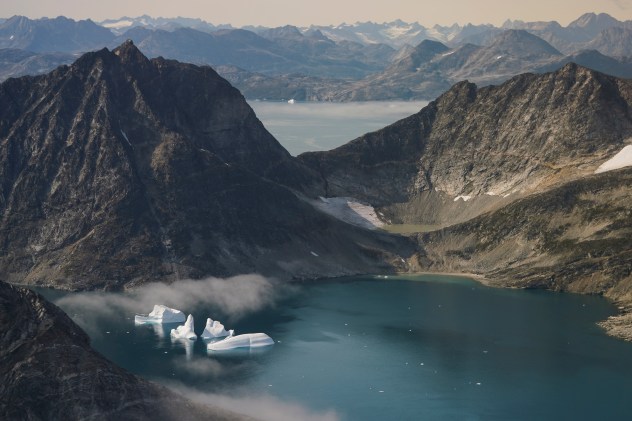 Icebergs are seen through a window of an airplane carrying NASA scientists as they fly on a mission to track melting ice in eastern Greenland on Aug. 14, 2019. Zombie ice from the massive Greenland ice sheet will eventually raise global sea level by at least 10 inches on its own, according to a study released in August 2022. Zombie or doomed ice is still attached to thicker areas of ice, but it’s no longer getting fed by those larger glaciers. (AP Photo/Mstyslav Chernov)

Understanding the past, Hörhold said, is important to prepare for future consequences.

"If you want to state something is global warming, you need to know what the natural variation was before humans actually interacted with the atmosphere," she said. "For that, you have to go to the past -- to the pre-industrial era -- when humans have not been emitting [carbon dioxide] into the atmosphere."

During pre-industrial times, there were no weather stations in Greenland that gathered temperature data like today. That's why the scientists relied on paleoclimate data, such as ice cores, to study the region's warming patterns. The last robust ice core analysis in Greenland ended in 1995, and that data didn't detect warming despite climate change already being apparent elsewhere, Hörhold said.

"With this extension to 2011, we can show that, 'Well, there is actually warming,'" she added. "The warming trend has been there since 1800, but we had the strong natural variability that has been hiding this warming." 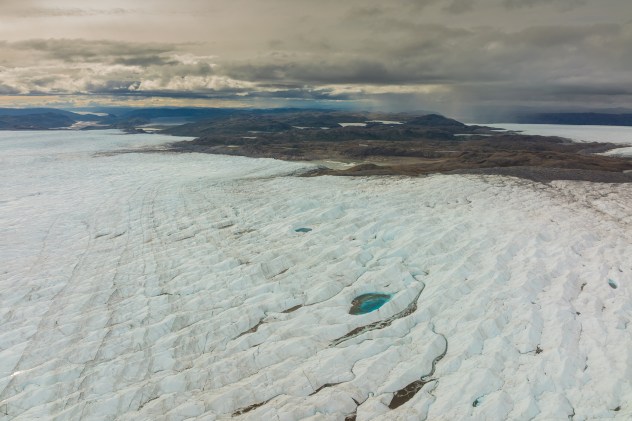 Temperatures on Greenland haven't been this warm in at least 1,000 years, scientists report. Pictured is the Russell Glacier front, part of the Greenland ice sheet in Kangerlussuaq, Greenland, on Aug. 16, 2022. ( LWimages AB/Getty Images/File)

Before humans began belching fossil fuel emissions into the atmosphere, temperatures near 32 degrees Fahrenheit in Greenland were unheard of. But recent research shows that the Arctic region has been warming four times faster than the rest of the planet.

Significant warming in Greenland's ice sheet is nearing a tipping point, scientists say, which could trigger catastrophic melting. Greenland holds enough ice that if it all melted, it could lift global sea levels by roughly 24 feet, according to NASA.

Although the study only covered temperatures through 2011, Greenland has seen extreme events since then. In 2019, an unexpectedly hot spring and a July heat wave caused almost the entire ice sheet's surface to begin melting, shedding roughly 532 billion tons of ice into the sea. Global sea level would rise by 1.5 millimeters as a result, scientists reported afterward.

Then in 2021, rain fell at the summit of Greenland -- roughly two miles above sea level -- for the first time on record. The warm air then fueled an extreme rain event, dumping 7 billion tons of water on the ice sheet, enough to fill the Reflecting Pool at Washington, DC's National Mall nearly 250,000 times. 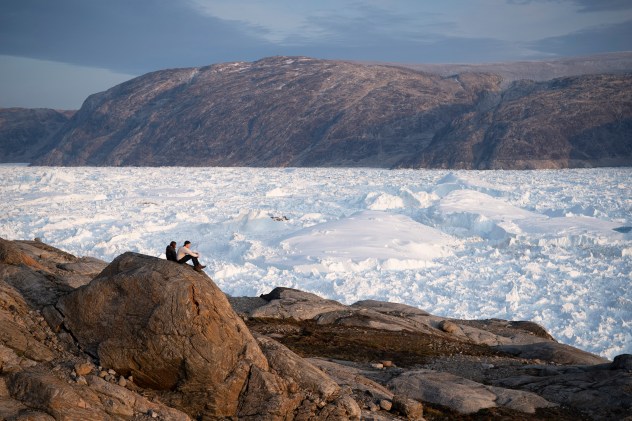 In this Aug. 16, 2019, photo, NYU student researchers sit on top of a rock overlooking the Helheim glacier in Greenland. (AP Photo/Felipe Dana)

With these extreme events in Greenland happening more often, Hörhold said the team will continue to monitor the changes.

"Every degree matters," Hörhold said. "At one point, we will go back to Greenland and we will keep on extending those records."