The severe conditions caused over 100 accidents across New England, including one in Massachusetts and another in R.I. that killed two drivers.

AccuWeather forecasters say another storm will take aim at the Northeast midweek and bring the threat of accumulating snow to the region.

As the last full week of January got underway, a winter storm that brought heavy snow to the interior Northeast late Sunday and into Monday has killed at least two people due to treacherous travel conditions. The storm also has cut power to thousands and forced school closures from New York to Maine.

A fatal crash was reported around 9 p.m. local time Sunday evening in Worcester, Massachusetts, when a 31-year-old Massachusetts man was killed in a wrong-way crash on Interstate 290. The crash, involving multiple cars, was initially reported by the Massachusetts Department of Transportation as having a "serious injury," before state police later confirmed the fatality.

Another fatality was reported in West Warwick, Rhode Island, after a crash on Interstate 95 north claimed the life of 25-year-old Beatrice J. Batista of Central Falls, Rhode Island, NBC10 Boston reported. A witness said the vehicle was traveling in the right lane when Batista lost control, exiting onto the shoulder, rolling over and striking a tree. Batista was pronounced dead at the scene, the station reported.

Since 5 a.m. local time Monday morning, New Hampshire State Police said troopers had responded to 90 crashes and vehicles off the road, including:

• On Interstate 93, officers responded to a morning rollover crash in Londonderry, a town just north of the Massachusetts-New Hampshire border. Troopers said injuries were reported with the crash, but no further details were provided. 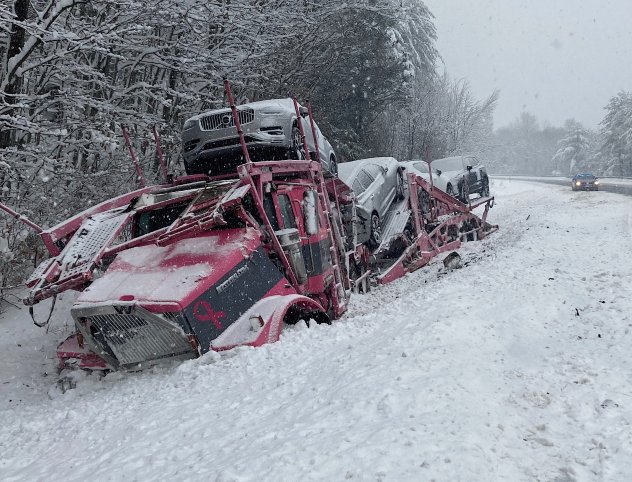 • Several hours later while emergency crews were on the scene of the above I-89 crash, another tractor trailer lost control on the slick highway and crashed into a wrecker and a flatbed tow truck that were both parked off to the side of the highway. Fortunately, both vehicles were unoccupied at the time of the crash, which occurred around 1:15 p.m., authorities said. The truck driver was unhurt. 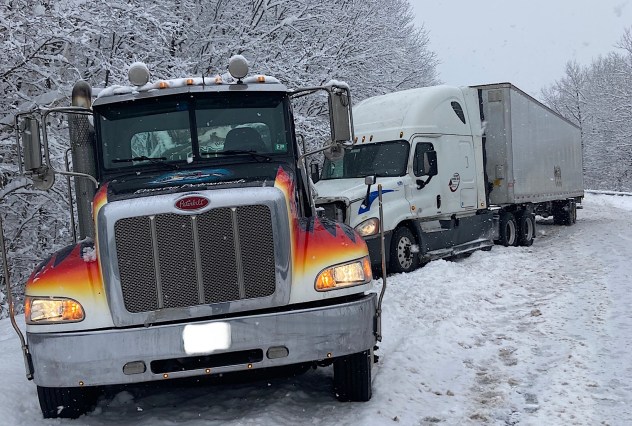 The driver of a semi-truck lost control of his rig on I-89 and crashed into a heavy duty wrecker that was on the scene of a previous crash hours earlier on Monday, Jan. 23, 2023. (New Hampshire State Police)

The Interstate speed limit was lowered to 45 mph across New Hampshire as the snow and ice created hazardous driving conditions and poor visibility in some spots.

"Leave yourself extra travel time to get to your destination this morning and clear the snow and ice from your vehicle prior to driving," the New Hampshire State Police office wrote on Twitter.

In Maine, the number of crashes and vehicles off the road climbed to 29 just before 9 a.m. EST Monday, according to the Maine State Police.

"Drivers driving too fast for road conditions is causing people to crash and slide off the road," the Maine State Police wrote on Twitter. "Drivers need to slow down and use caution if they must drive."

A speed restriction of 45 mph was put in place for a section of Interstate 95 in Maine as a preventive Sunday night. 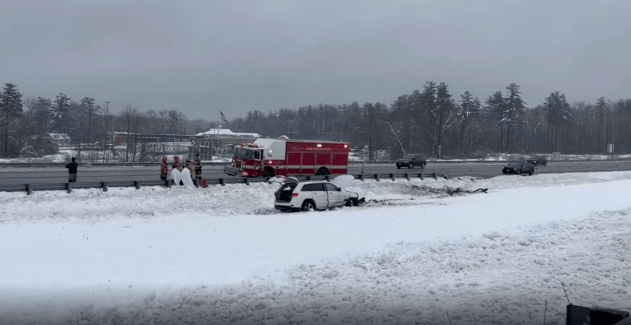 The Massachusetts State Police also put a speed restriction in place for parts of Interstate 90. The Massachusetts Department of Transportation (MassDOT) had at least 528 pieces of snow removal equipment deployed across the state on Monday morning. 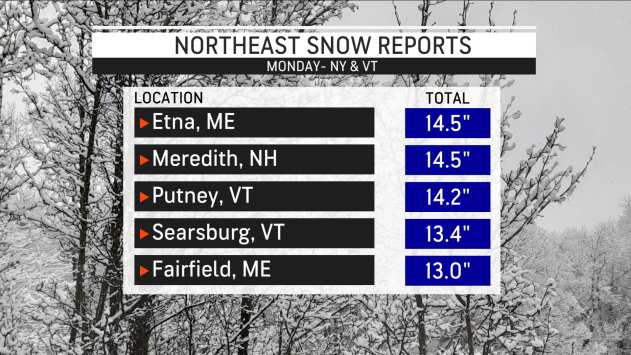 Other states throughout the Northeast that accumulated snow included Connecticut, where 8 inches fell in the town of Bakerville, as well as Massachusetts (7 inches in the city of North Adams) and Pennsylvania (5 inches in Lawrenceville Township in north-central Pennsylvania).

The heavy, wet snow that fell across the interior Northeast weighed down tree limbs and power lines, and by Monday afternoon, power outages climbed into the tens of thousands for Massachusetts, New Hampshire and Maine. Combined, roughly 120,000 customers were without power Tuesday morning, according to PowerOutage.US.

In New York, numerous schools opened under a "two-hour delay" while others closed for the day. Instead of canceling Monday classes, several universities in Albany, New York, opted for all classes to go remote due to the inclement weather, WNYT reported.

Universities aren't the only schools opting for classes to be remote during inclement weather, either. As virtual learning took off during the pandemic, some educators decided snow days are now unnecessary.

One thing that was not canceled due to the snowy weather was the NFL playoff game between the Cincinnati Bengals and Buffalo Bills on Sunday in Orchard Park, New York. Crews shoveled the snow off the goal line before the game started, but as the snow continued to fall during the game, crews were back out before the start of each period to clear off the field for the players. The players and bundled-up fans didn't seem to mind the snow during the game.

As the sun set and darkness closed in on Buffalo during the third period of the game, the sky illuminated an eerie blue hue. In a photo of the stadium from afar, the arena's spotlights can be seen lighting up the field, but a dark blue sky covered the outside of the arena.

AccuWeather meteorologists say that snow lovers will be in luck across the Northeast this week. Although the snow drought may continue across much of the Interstate 95 corridor, another storm is expected to bring more snow to the Midwest and interior Northeast later this week.