As the state continues to dry out from a recent string of Pacific storms, city officials and crews are working tirelessly to clean up the debris blanketing the shorelines. 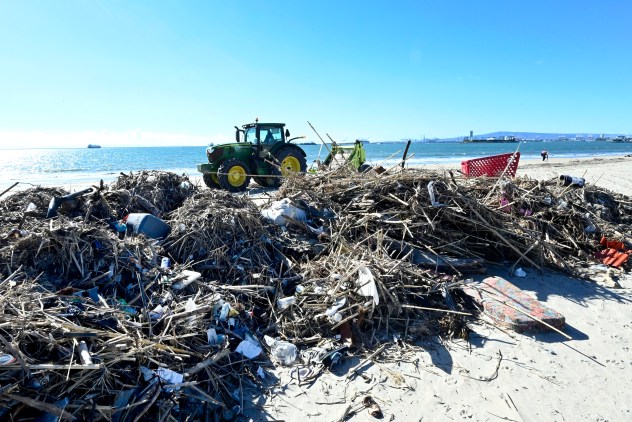 After weeks of winter storms that brought flooding rains to California, water hasn't been the only thing flowing into the ocean. A mishmash of debris, trash and worn items, such as golf balls, has been deposited on beaches along the coastline. These piles of storm debris aren't just ruining the tranquil landscape; they're creating a hazard for the wildlife that calls the California beaches their home, according to officials.

Following a series of floods decades ago in Southern California that cost millions of dollars in property damage, officials channelized the Los Angeles River. The concert channels would not only direct water from heavy rain events straight into the ocean, but they would keep the floodwaters out of the streets and neighborhoods, reducing the amount of property damage each time a heavy rainstorm and flooding occurred.

"We're basically a desert, we get flash floods. That's why the channels were built the way they were – they were designed to carry large volumes of water that comes suddenly," Kim Buss, a senior environmental resources specialist for Orange County Public Works, told The Press-Telegram. "The idea was to keep it away from the properties and (direct it) into the ocean, where it eventually would be headed anyway."

Thousands of golf balls wash up on Carmel Beach after winter storm https://t.co/bmEGuWDFhA

During the dry times, trash built up in the storm drains and sewers. When a heavy rainfall event occurs, the rapidly flowing runoff carries mounds of waste into the channel and deposits it along the shoreline.

Although different measures are in place to try to catch some of the debris before it ends up on the shoreline, trash still manages to get through.

"We get all kinds of different trash out here," Kenneth Perez, with the Bolsa Chica Conservancy in Southern California, told KTLA5. "You would think that a lot of the trash that we get out here is small stuff and that is definitely true. A lot of it is, like, microplastics, bottlecaps, you know, the little stuff that you normally associate with trash, but we do also get larger pieces of debris."

In Central California, a "plethora" of golf balls have been deposited on the beaches in Carmel-by-the-Sea, KSBW reported.

Just north of Carmel-by-the-Sea are several golf courses, including the oceanside Pebbles Beach Golf Links. While not a definite cause, it's likely the recent storms raised water levels, which pushed dormant golf balls all the way to the ocean.

Some people are even collecting golf balls.

"This is my third day back down here, and I get about 50 to 100 in a half hour," Conall Jones of Carmel Valley told KSBW. "There is still a lot, and they will keep getting pushed up on the beach, so there is plenty." 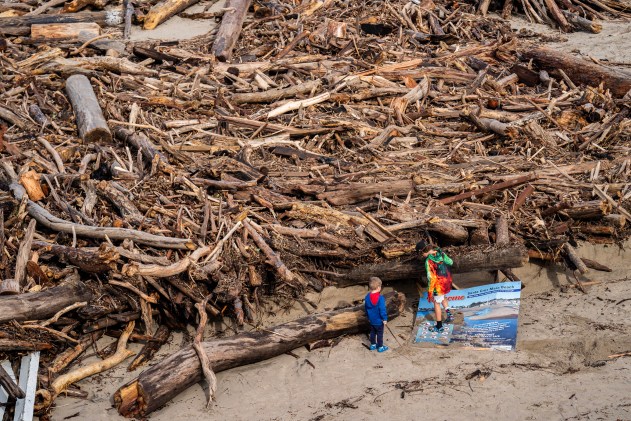 During a break from a series of powerful storms of rain and high winds hitting the California's Central Coast, locals enjoy the massive amount of storm debris and uniquely good surfing on Main Beach in Santa Cruz, California on Jan. 8, 2023. (Melina Mara/The Washington Post via Getty Images)

Beaches near the famous Santa Cruz boardwalk were covered in piles of driftwood. KCBS anchor Kris Ankarlo captured a drone video of the "forest of driftwood" that blanketed the shoreline.

Now that a much-needed break from the relentless train of storms is set to unfold across California, towns and cities are starting to clean up the piles of debris and trash that have littered the waterways and shorelines.

Chilly start across the southern Plains