California getting much needed break from storms. How long will it last?

Storm chaser Brandon Clement shared drone videos that compare the before-and-after views of multiple areas in California from the severe droughts in July to the recent flooding in January.

A much-needed break from the relentless train of storms from the Pacific is unfolding across California, and AccuWeather meteorologists believe the pause in major rain and mountain snow events should last through the end of January.

During much of late December and the first half of January, storms from the central Pacific continuously plowed into California while grabbing plumes of subtropical moisture along the way. The storms brought drought-easing rain and yards of snow to the mountains but also triggered deadly and damaging flooding and mudslides as snow shut down travel over the Sierra Nevada passes.

While storms will continue to roll along across the northern Pacific in the coming weeks, a zone of high pressure will build at most levels of the atmosphere along the West Coast of the United States. This will keep dry conditions in place, but has led to a separate hazard in the form of gusty Santa Ana winds. 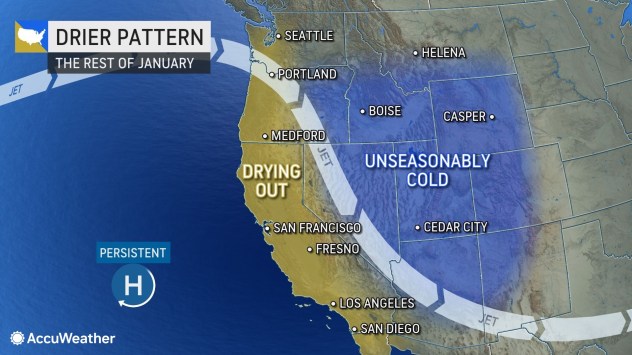 This setup will force the storms to swing well to the north and far away from tropical moisture before plunging southward over the interior Southwest, rather than along the California coast.

Storms of this nature are often referred to as “inside sliders” by meteorologists.

One such storm produced patchy low-elevation rain showers and mountain snow into Thursday night over parts of California before it pushed eastward and brought accumulating snow to the interior Southwest on Friday. This storm had much less moisture to work with and was drop in the bucket compared to many prior storms this month.

The changing weather pattern will allow the ground to dry out and streams to recede gradually. However, the runoff will continue to fill area lakes and reservoirs over the next couple of weeks.

As a storm pivots from the interior Southwest to the southern Plains this week, high pressure has built across the Great Basin. Windy conditions during the atmospheric transfer can cause some trouble. 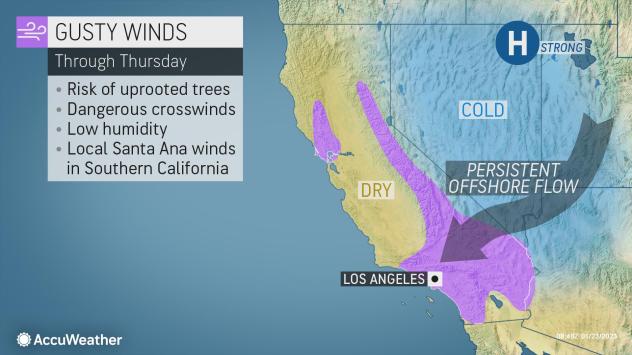 Since the soil will remain moist and tree canopies have absorbed some of the wet weather, moderate amounts of wind can cause some top-heavy trees to come crashing down without notice.

"This setup supports the risk for Santa Ana winds in Southern California and perhaps similar Diablo winds around San Francisco to develop next week, potentially for a string of days," AccuWeather Long-Range Meteorologist Joe Bauer explained.

"The northeast winds can lead to gusty conditions over the mountains and northeast-facing canyons and breezy conditions extending into the valleys and some coastal areas," Bauer added.

The most favorable setup for these strong wind gusts was in place on Sunday, with the sharpest gradient between high and low pressure in place. However, gusty winds will continue to be a hazard on Monday and Tuesday. 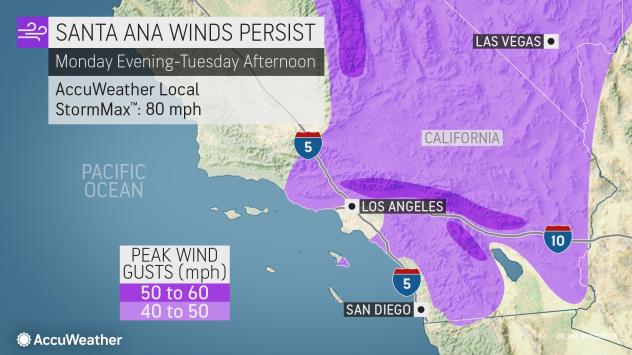 After what may be a short break on Wednesday, gusty winds may return again on Thursday. While these Santa Ana winds are often associated with a high wildfire danger, recent rounds of heavy rain will keep that threat at bay. Instead, the combination of gusty winds and wet soil can lead to downed trees and power lines.

AccuWeather's long-range forecasting team believes that some storms may return to California during early February. Drenching rain, mountain snow and travel problems are likely to resurface in early February but probably not to the scope of the past few weeks.

There has already been an incredible amount of snow over the Sierra Nevada this winter, compared to recent years, and more snow is expected. 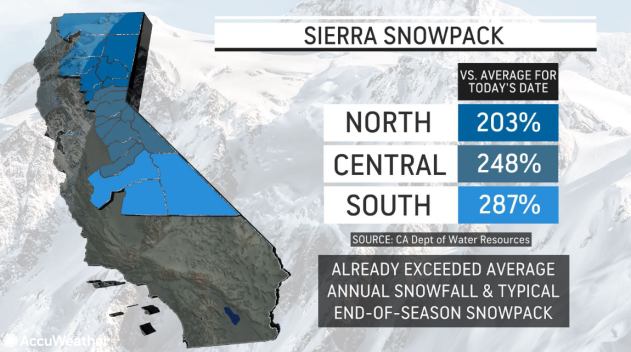 Snowpack levels are well above average in the Sierra Nevada as of Jan. 20, 2023.

"It appears as though the northward bulge in the jet stream will shift position and drift westward and well off the Pacific coast for a time in early February," AccuWeather Lead Long-Range Meteorologist Paul Pastelok said. "This will open up the opportunity for storms to drop southward over California, rather than slide inside over the interior Southwest."

Pastelok's team believes that the return of storms may last only a week or so during early February before the bulge in the jet stream returns to the Pacific Coast states.

"One difference in the upcoming pattern in early February is that we do not foresee a merge in the jet stream that allows a great deal of tropical moisture to be drawn in," Pastelok said. As a result, upcoming storms in early February will not be as potent with less wind, rain and mountain snow compared to late December and the first half of January. 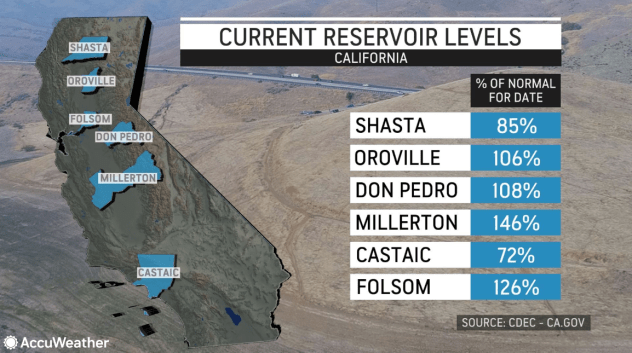 More rounds of storms may follow later in February, March and perhaps in April. This would make a dramatic difference when compared to the 2021-2022 winter when storms became much less frequent after a busy December.

That lack of storms helped lead to exceptional drought last summer across the Golden State. This winter, rain is already well ahead of last year's pace and is filling reservoirs as a result. The state is also no longer experiencing any extreme or exceptional drought conditions, according to the U.S. Drought Monitor.

With the surplus of rain thus far this winter, grass and other brush will likely grow rapidly heading into the spring before drying out in the heat of the summer. That excess amount of brush could serve as more fuel for wildfires.

"We believe that La Niña will continue to weaken and an El Niño may develop this summer to this autumn, but how strongly and how fast that occurs has implications on the upcoming fire season," Pastelok said.

Experts say the brush will dry out heading into the summer and early autumn, no matter how wet or dry the winter storm season was. How many fires erupt will depend on human interaction as well as the amount of lightning and intensity of wind storms that develop.

Man stumbled on incredible discovery in opening of cliff