What are Santa Ana winds?

High-speed and dangerous winds that periodically kick up and blow from the mountains to the coast in Southern California are referred to as Santa Ana winds.

These northeasterly winds blow from the coast ranges to the beaches as areas of strong high pressure build across the interior West. The phenomenon typically peaks in October but can occur anytime from late to early spring. 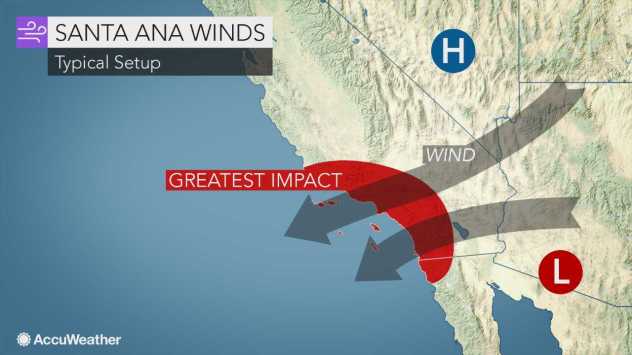 The wind speed can be magnified as air tries to squeeze over mountain passes and rush downhill through the canyons that are aligned in a northeast to southwest direction. As the air descends in elevation, it becomes compressed and heats up and dries out even more.

In addition to a heightened risk of wildfires, whole trees and high-profile vehicles can be knocked over, and sporadic power outages are likely in more extreme cases.

When winds aloft become aligned from the same direction as that of the winds near the surface, the strongest gusts occur. Sometimes wind gusts can reach the force of a hurricane (74 mph or greater). Gusts during this particular setup can lead to extensive property damage and widespread power outages. 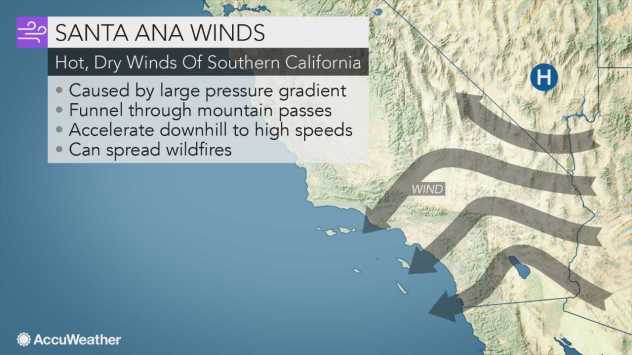 "Most Santa Ana events peak for a 12- to 24-hour period, then the winds ease," according to AccuWeather Senior Meteorologist Ken Clark.

"However, on rare occasions, strong winds can persist for a few days," Clark said.

While a wildfire can break out in absence of a Santa Ana, it is during these long-lasting events, that multiple and extensive wildfires can result.

Under these circumstances, the risk of wildfire ignition and spread is the greatest. Temperatures can surge past 100 degrees Fahrenheit near the coast, even during the autumn, winter and spring months.

When the air gets this hot, it also become extremely dry. When brush is also very dry, as is often the case, the wildfire potential becomes extreme and people must be extremely careful with any open flames, including from burning cigarettes and outdoor power equipment that may lead to sparks.

Sometimes cool or cold air is associated with a Santa Ana.

While such an event results in a lower fire risk when compared to a warm Santa Ana, there is still a significant risk of wildfire ignition. This is because the air is often still very dry and strong wind gusts can quickly cause any small fire that breaks out to rapidly spread.

In the wake of a chilly Santa Ana during the late fall, winter and early spring, a frost or freeze can occur in the normally cold spots, where the sky remains clear and breezes subside.

There are other local wind notorious winds in California that have names.

What is a Diablo wind?

A Diablo wind occurs around the San Francisco Bay region and is produced by the same mechanism that produces a Santa Ana wind. This wind is magnified by terrain effects similar to a Santa Ana.

However, a Diablo wind is most common during the winter, spring and autumn but can occur during the late summer as well.

The wind almost always brings a great surge in temperature and dry air.

What is a Sundowner wind?

Another potentially damaging and dangerous wind is a Sundowner wind.

Like the name implies, a Sundowner wind typically kicks up around sunset, when the typical sea breeze or marine flow diminishes. However, the wind can occur prior to and last beyond the nighttime hours.

Sundowner winds tend to blow from the north from the Santa Ynez Mountains to the coast of Santa Barbara County, California. Sundowner winds are most common during the late spring and early summer.

Like the Santa Ana, the wind can reach hurricane force in extreme cases. Goleta and Montecito, California, are two cities that are often most affected by Sundowner winds.