Some locations in the Northeast have been anything but a winter wonderland this season as snowflakes have been few and far between. AccuWeather forecasters explain why and when snow chances could return to places such as New York City and Philadelphia.

Indoor ski resorts are an alternative way to keep skills fresh or have some fun when Mother Nature isn’t cooperating.

It’s been anything but a winter wonderland for fans of snowflakes in several large metro areas in the Northeast this season.

From Oct. 1, 2022, through Sunday, Jan. 22, New York City, Philadelphia and Washington, D.C., have received only trace amounts of snowfall, a vast departure from the typical accumulation during that timespan. A trace amount does not qualify as measurable snow, according to AccuWeather meteorologists.

For New York City, the first measurable snowfall of the season typically takes place around Dec. 1, but it has become increasingly likely that the Big Apple will set a new record for its latest measurable first snow on record. The record for consecutive number of days without 0.1 of an inch of snow or greater in the Big Apple is 332, a streak that ended on Dec. 15, 2020. The city's ongoing streak is at 319 days and counting.

The average accumulation through Jan. 22 for New York City city is 10.6 inches of snow. 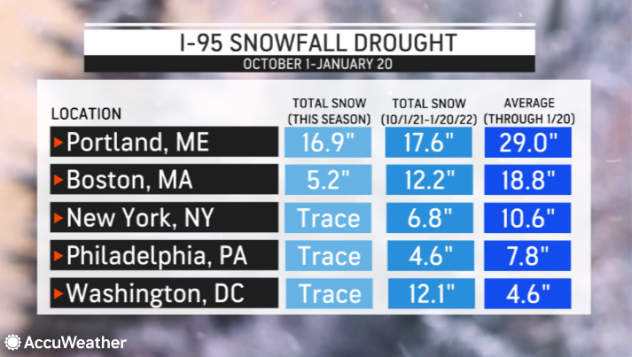 Similarly, Philadelphia now is at risk of having a “snowless” winter for the first time since the 1972-73 season, the last time that only trace amounts of snow were produced during an entire winter. The city gets an average of 7.1 inches of accumulation per season, with 4.6 inches measured as of this time last year.

In the nation’s capital city, the trace amount of accumulation in Washington, D.C., is a far cry from the foot of snow that fell there through the middle of January in 2022.

Even Northeastern cities that have received measurable snowfall are reporting significant departures from normal. Boston has taken in 5.2 inches of snow thus far in the 2022-23 winter season, including some snowfall last weekend, whereas the city is usually well over a foot of accumulation this far into January. A similar difference was reported in Portland, Maine, which has received 17.6 inches of snowfall, compared to the typical amount of over 2 feet.

AccuWeather Senior Meteorologist Bob Larson pointed to higher-than-normal temperatures across the I-95 corridor as the top reason for the snowfall departure.

Since the beginning of the month, average temperatures in New York City, Boston, Pittsburgh, Philadelphia and Washington, D.C., are all running at least 8 degrees higher than normal. “It’s obviously tough to get much in the way of snow when it is mild and warm,” Larson said. 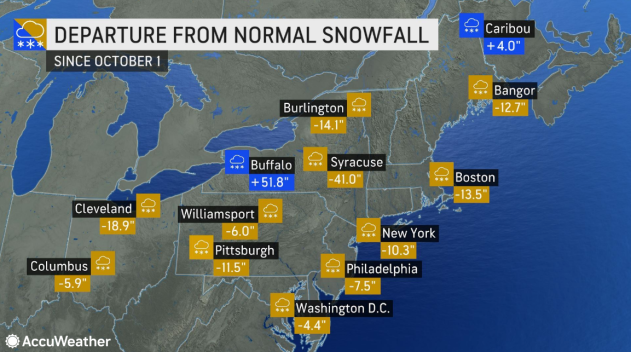 Snowfall departures from normal across the Northeast as of Jan. 20, 2023.

One setup for potential snowfall took place in December due to a “blocking” pattern. An upper-level high-pressure system set up over Greenland and effectively blocked the progress of cold air in Canada and diverted it south into the United States.

“In addition to cold weather, this block often sets up a storm track that is favorable for snow in the mid-Atlantic and/or Northeast,” Larson stated. “In this case, the cold certainly arrived, but the storm track never materialized.”

Some of the only cities with above-normal snowfall for the season in the Northeast are those that were affected by record lake-effect snow in November and December. One extreme example of this is Buffalo, which has measured about 51.8 inches of snow above normal so far this season. Several New England cities were finally hit with some snowfall on Friday, including 9.5 inches in Acton, Maine and 9 inches in New Boston, New Hampshire. 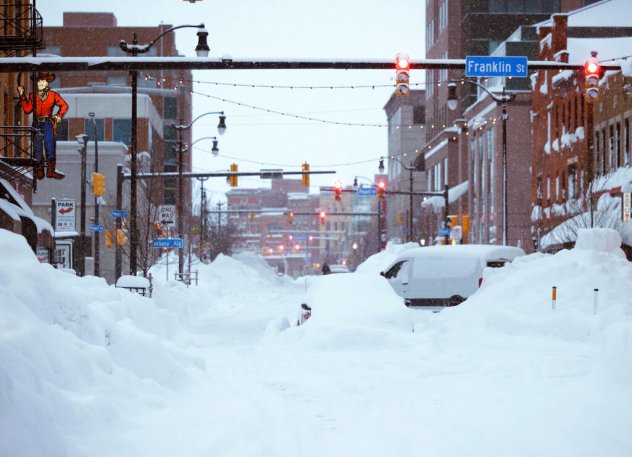 Despite several more storms in the forecast through next week, it appears mostly rain, rather than snow, will fall along the I-95 corridor, especially near and south of New York City. In fact, substantial snowfall could be at least another month away, according to AccuWeather Meteorologist Alex DaSilva.

According to DaSilva, the pattern looks to remain similar into the start of February, with AccuWeather meteorologists predicting above-normal temperatures to continue. On average, forecasters say February is the snowiest month of the year for coastal areas of the mid-Atlantic.

“There might be a few storms; however, they likely will be too warm for the coast and really bring snow only to the interior,” DaSilva said, adding that it could be until the latter half of the winter until chances of snow along the coastal Northeast become more frequent. 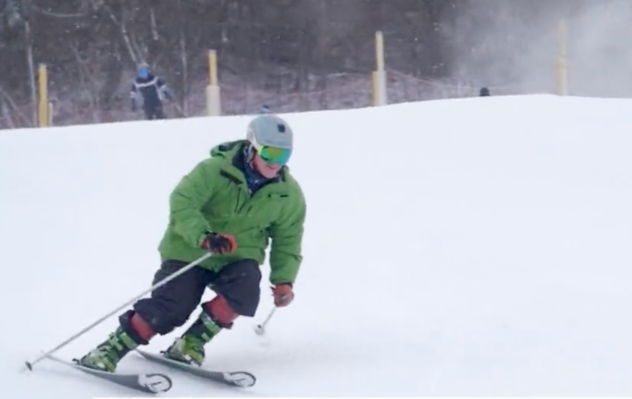 The lack of snowfall has left many craving the rush of outdoor winter sports, such as skiing and snowboarding. Mountain Creek Resort in Vernon Township, New Jersey, has been relying heavily on manmade snow to maintain operations.

To fill the void, indoor ski and snowboarding locations such as Big SNOW American Dream in East Rutherford, New Jersey, which also operates Mountain Creek, have been in high demand.

“We’ve definitely seen an increase in business this year … we are lucky that we don’t have to worry about the effects of weather,” Big SNOW American Dream Chief Marketing Officer Hugh Reynolds told AccuWeather National Reporter Emmy Victor. “We control our own environment.”