What a difference a week can make.

A substantial warmup unfolded throughout the middle of the United States this week, including across areas that were hit hard by disastrous winter weather and in the throes of the historic cold snap last week, with places like Dallas, Oklahoma City and Topeka, Kansas, experiencing remarkable temperature turnarounds.

Rounds of snow and ice compounded a power crisis across parts of the South Central states that left millions of Americans without heat amid the coldest air in decades. And the bitterly cold air left behind a mess too. Many Texans face lengthy cleanup from burst pipes along with ongoing water shortages in the aftermath of the winter storms.

Brutal cold spread across the Plains, reaching as far south as Texas and Louisiana. Low-temperature records fell as the mercury plummeted to below zero in southern cities like Oklahoma City and Dallas.

Fast forward to one week later and a big warmup was enveloping the Central states Tuesday thanks to the retreat of Arctic air back into Canada.

Temperatures began climbing in earnest this past weekend, with some areas finally creeping above freezing and into the 40s and 50s.

The warming trend continued to ramp up early in the week. On Monday, Feb. 22, the temperature in Rapid City, South Dakota, soared to 57 degrees in the afternoon after bottoming out at 24 degrees below zero last week, making for an 81-degree temperature swing.

"It's not just the fact that we have a huge warmup from last week to this week, it's the fact that temperatures are also above normal as well," AccuWeather Broadcast Meteorologist Brittany Boyer pointed out.

Temperatures in the low to upper 70s in cities like Oklahoma City are about 15 degrees above normal for late February and are more typical of mid-April.

The temperature in Dallas bottomed out at 2 below zero on Feb. 16 and reached a high of just 18 that day. With the high temperature soaring to 81 on Feb. 23, people in Big D felt a big temperature swing of 83 degrees exactly a week later.

Following new record-low temperatures set in the middle of February, the temperature swing will have residents wondering which season it is and could leave many with severe case of weather whiplash.

The big warmup winner was Topeka, Kansas, another city that took a ride on an extreme weather roller coaster. After a low temperature of 21 below zero on Feb. 16, a high temperature of 71 on Tuesday equaled a jump of 92 degrees.

While not as extreme, cities like Austin and San Antonio, Texas, saw turnarounds of 60-plus and 70-plus degrees on Tuesday, respectively.

Those displaced from their homes, or still without power, may need alternative ways to stay comfortable through Wednesday afternoon.

In some cities farther east, the warmest air arrived on Wednesday, but the warmup coming for the eastern U.S. will not be as dramatic as the one in the center of the country, but it will still be one of the first big warmups so far this winter. 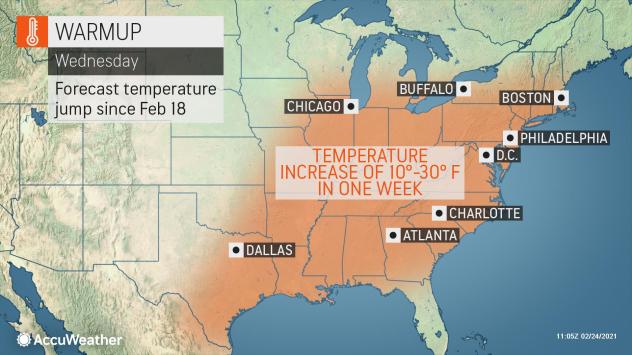 From cities like Detroit and Buffalo to Raleigh and Atlanta, temperature swings upwards of 10 to as much as 30 degrees above last week's frigid levels are expected Wednesday. Afternoon highs will soar high enough above normal that it will feel more like an early spring day than late February, according to AccuWeather forecasters.

High temperatures are likely to rebound from the teens and 20s in the central Appalachians late in the weekend, to the 30s and lower 40s by midweek. Meanwhile, highs along the I-95 corridor of the Northeast will trend upward into the 40s in Boston and New York City, to the 50s and even near 60 in Washington, D.C., by the middle of the week, among others. In several locations, Wednesday will go down as the warmest day so far this year.

In comparison, Boston's normal high is in the low 40s during late February. New York City typically climbs into the mid-40s during the last week of February, and D.C. reaches right around 50 on average during this time frame.

In Richmond, Virginia, a forecast high of 65 is expected on Wednesday. Not only would it be the warmest day since Jan. 2 for the city, but the temperature would swing 46 degrees higher than the low temperature Sunday morning. 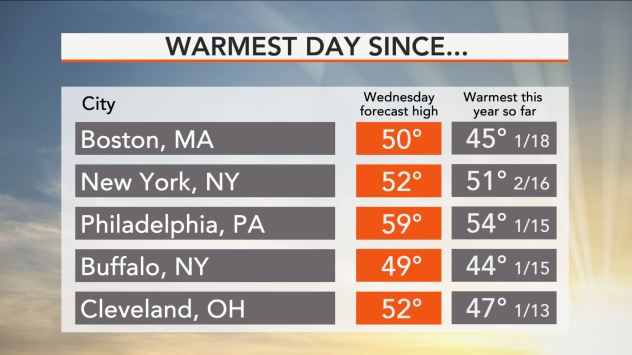 The accelerating thaw will help with natural melting of ice and snow on roads, especially across the Northeast where some locations still have 6-12 inches of snow on the ground.

Even the thaw can cause some pipes that split but remained frozen to this point to release water without notice. Property owners may want to thoroughly inspect all the pipes before turning the water back on.

Right at the end of the month, the weather pattern will once again shift, bringing an end to the abnormal warmth and presenting temperatures more typical for early March.

AccuWeather meteorologists believe that while some colder air was settling over the South Central states on Wednesday with slightly below-average temperatures, the cooler air will pale in comparison to last week's frigid conditions.

Meanwhile, in the Northeast, forecast high temperatures are projected to be 5-15 degrees lower on Thursday, or back to near normal for the end of February.