Tornadoes are often deadly. If you live in an area prone to twisters, it's important to have a plan in place before it becomes necessary.

AccuWeather meteorologists are calling for a slow start to the peak of the severe weather season across the United States this spring, and they are warning of the possibility that severe weather and tornado activity could abruptly fire up and rival one of the most notorious severe weather seasons ever, due to some atmospheric similarities current weather patterns bear to that devastating season.

In addition, one area of the country that accounts for only a small fraction of tornado activity could be at risk for more severe weather than usual this year. All of those factors and much more are covered in AccuWeather's annual U.S. tornado forecast, a comprehensive look at what the long-range forecast team expects in terms of the number of tornadoes predicted to occur throughout the year and places that are at risk of getting the most action.

In recent years, the severe weather and tornado season has kicked off earlier than usual. Severe weather can occur during any month of the year, but the peak activity usually falls during the months of March, April and May. Storm chasers tracked robust thunderstorms across the Plains during the middle of winter and into the beginning of spring in 2020.

“The last couple years, it was an early start to tornado season," Extreme Meteorologist Reed Timmer said in AccuWeather's spring preview. "We were already chasing during parts of January last year. That's because there were El Niño conditions in the tropical Pacific, so we had a very energized southern stream to the jet that was pumping moisture, bringing with it disturbances as well, early on in the year. And that's why we were chasing in January, February and then again in March.”

There was another key factor to last year's early onset of severe weather, AccuWeather Lead Long-Range Meteorologist Paul Pastelok added. "There was a lack of true Arctic, stable air in mid- to late winter last year," he said -- something that certainly hasn't been lacking this winter.

However, this spring is forecast to play out differently with a La Niña pattern that is expected to continue and influence weather patterns across the globe. La Niña patterns are characterized by strong northern branches of the jet stream. Some noteworthy historical seasons for severe weather have been shaped by such patterns, but not all La Niña years are exactly alike, and other factors need to be taken into account, AccuWeather meteorologists explain. 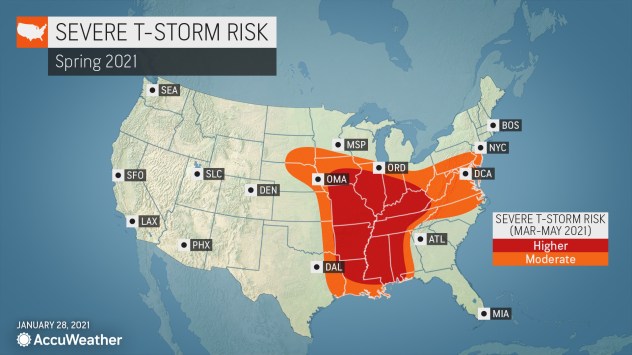 "The temperature of the water in the central and eastern Tropical Pacific during February 2021 is similar to the La Niña pattern in February 2011," Pastelok said. Water temperatures in mid-February in those parts of the Pacific Ocean ranged from 73-81 degrees, about 1-2 degrees below normal for this time of year, according to the World Meteorological Organization. Those water temperatures are expected to remain below normal through March, which will allow the La Niña pattern to persist into spring.

"[The spring of 2011] was one of the most active springs in recorded history, especially April with over 700 tornadoes, but it was a later start to that tornado season," added Timmer. "During February and March of that year, everyone was wondering if it was going to be a very below-average year and then the bottom dropped out in April.”

Similar to 2011, the start to severe weather season may be slow to develop across the United States then turn more active by April and May.

Despite the slow start to the season during late winter, recent clashes of the bitterly cold air accompanying cross-country winter storms and warmer air to the south have set the stage for destructive and even deadly tornadoes.

On Sunday, Feb. 14, an EF0 tornado ransacked a retirement community in the Tampa area. Just one day later, an EF2 tornado touched down in Damascus, Georgia, on Monday afternoon. Another tornado claimed at least three lives as it charged across parts of Brunswick County in southeastern North Carolina, inflicting serious damage along its path, early Tuesday morning.

As of Feb.16, the Storm Prediction Center (SPC) reports that 23 tornadoes had touched down so far in 2021. On average, 64 tornadoes occur during January and February in the U.S.

Last year was a below-average year for tornadoes across the U.S. According to preliminary figures, there were 1,075 reports of tornadoes in 2020. It's worth noting, however, that these numbers have not been finalized by the SPC and may be adjusted. Even though tornado reports were below average in 2020, the 76 fatalities blamed on tornadoes were nearly double the three-year average, according to SPC statistics. 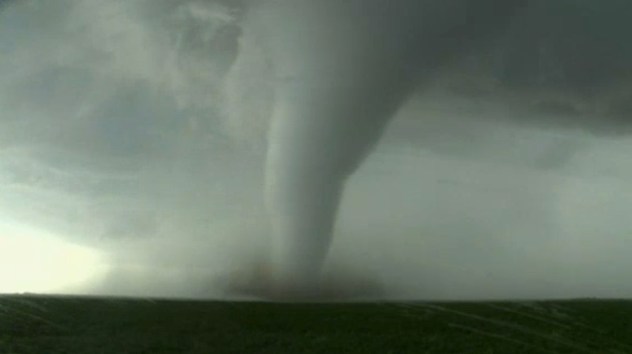 This image made from a Tuesday, May 24, 2016 video by KWTV-KOTV, shows a funnel cloud moving across the field near Dodge City in Ford County, Kan. Crews are evaluating the damage Wednesday after tornadoes destroyed several homes in western Kansas as a series of severe storms swept across the Plains. (KWTV-KOTV via AP)

“The mid- to- lower Mississippi Valley and the mid-Atlantic will be in the highest risk for severe weather this spring,” added Pastelok. Increased severe weather could be particularly dangerous for these regions, especially for the mid-Atlantic, which gets only a small percentage of tornado activity each year.

Based on numbers from the National Oceanic and Atmospheric Association (NOAA), the states of Pennsylvania, Maryland, Delaware, New Jersey and Virginia account for about four percent of tornado reports each year. However, these areas are much more densely populated than places in Tornado Alley, which is why FEMA's recently launched National Risk Index tool lists Philadelphia and New York City higher on the index for tornado risk than places in Kansas and Oklahoma, which are in the heart of Tornado Alley.

While the projected number of tornadoes is expected to be near normal this spring, Tornado Alley, the region extending from South Dakota to northern Texas, may have a below-average severe weather season.

Extreme drought conditions, which began developing in 2020, across the Four Corners region can expand this spring across the central and southern Plains. This can limit available moisture needed for development of severe weather in the area of the country most known for its fierce thunderstorms.

Another area that is no stranger to severe weather may face the bulk of the activity this spring.

“The slow retreat of the upper-level jet stream and a sharp surface temperature contrast can lead to a good setup for severe thunderstorms in the Mississippi and Tennessee valleys during late March and April,” said Pastelok, adding that these regions can remain active into early summer.

Frequent rounds of severe thunderstorms will erupt from eastern Texas to Georgia, including the Tennessee Valley, a region known as a secondary hotbed for tornadoes in the U.S. outside of Tornado Alley.

How to prepare for severe weather in the age of social distancing
How to stay safe when tornadoes strike at night
Powerful tornado tears through NC, killing at least 3

Closer to the Gulf and Southeast coasts, severe weather will be slow to ramp up due to cooler-than-normal water near coastal areas of the Gulf of Mexico and the southwestern Atlantic Ocean after an active tropical season in 2020, which brought cooler water closer to the surface. In addition, the Arctic cold blast that plunged areas all the way to the western Gulf Coast into a deep freeze during the middle of February has contributed to cooling waters.

"Cooler water correlates to less severe weather, which can lead to an even slower start for the severe season in these areas,” Pastelok explained. 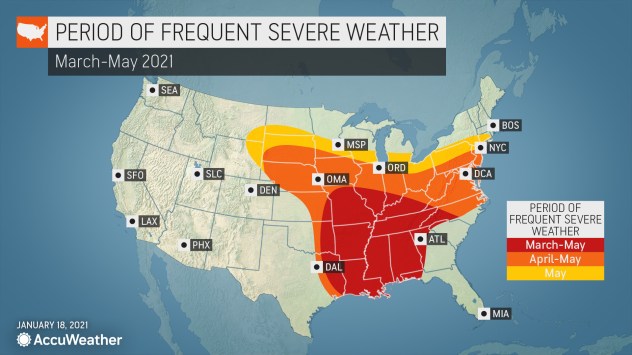 Pastelok added that the Gulf water temperatures will be likely to rise up quicker than the Atlantic waters off the Southeast coast, which will be a critical factor and lead to an earlier uptick in severe weather across the central Gulf states and Mississippi Valley compared to across the Southeast.

By May, the jet stream will continue to shift north and an area of high pressure is expected to build over the central and southern Plains. Storms moving along the northern edge of this large area of high pressure, often called ridge-riders, can bring the potential for severe storms to the northern Plains, Upper Midwest and into parts of the Northeast through the end of spring.

However, AccuWeather forecasters emphasize that the main area to watch during the peak season will be across the mid- to- lower Mississippi Valley into the Tennessee Valley. Some of these areas were also pummeled during the 2011 season, which is drawing some comparisons from meteorologists.

April 2011 featured the infamous Super Outbreak with more than 360 tornadoes touching down over a three-day period across 20 states. Most of the activity during that outbreak occurred in the Deep South, Timmer said.