Accumulating snow to continue over Northeast through Monday night

Snow will continue to pile up in parts of the interior Northeast before the storm diminishes on Tuesday.

As colder air sweeps toward the coast, snow will lead to slippery conditions from New York City and Boston into Monday night, while snow piles up over the interior Northeast.

Up through Sunday night, most of the snow, ice and rain produced throughout the Northeast was from an older storm that first blasted the Midwest over the weekend. Now, a new storm strengthening along the coast is cranking out more snow across the interior and causing accumulating snow in areas along Interstate 95 where rain was falling at the start of Monday. 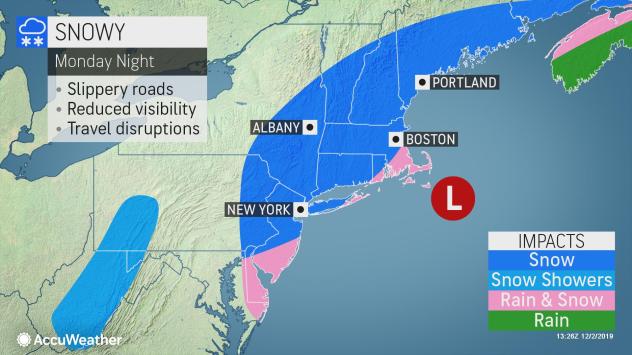 Winter storm warnings were in effect from the southern Appalachians to Maine on Monday.

The accumulating snow can happen quickly with roads transitioning from wet to slushy to snow-covered in a matter of minutes in some cases as surfaces cool through Monday night.

Snow is expected to come down hard during the overnight hours across much of New England.

Enough snow to shovel and plow is forecast for the northern and western suburbs of New York City. The same is foreseen within the cities of Hartford, Connecticut, and Boston.

Boston public schools announced that they will be closed on Tuesday as the storm moves through the city. 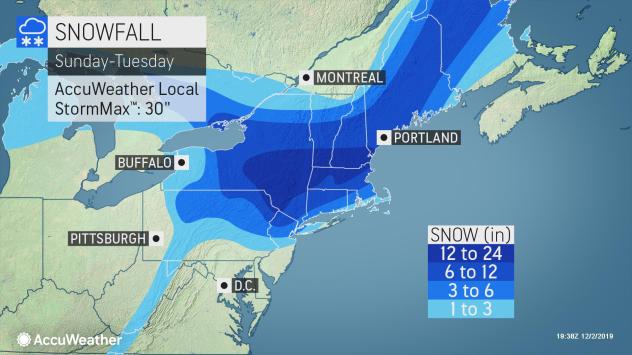 In the city of Boston and points on eastward to Cape Cod, Massachusetts, the worst drive may be during Tuesday morning's rush hour.

A general 1-2 feet of snow is in store for this swath with an AccuWeather Local StormMax™ of 30 inches in the mountains over this swath.

Cities that have the potential to receive a storm total of 2 feet of snow include Albany and Kingston, New York; Bennington, Vermont; Keene and Manchester, New Hampshire; and Worcester and Pittsfield, Massachusetts.

Meanwhile, the old part of the storm system will continue to produce snow showers from western New York and western and central Pennsylvania southward to central and eastern Tennessee and western North Carolina into Monday night.

Potential dangers of not removing the snow, ice off your vehicle before driving Top hacks to deice your vehicle during winter’s icy grip Experts debunk 4 winter driving myths

A general 1-3 inches of snow is in store for these areas with slightly less in the valleys and a bit more over the ridges.

Meanwhile, the tail end of the storm can bring mixed rain and snow showers to the Baltimore and Washington, D.C., areas. However, other than a small slushy accumulation on grassy surfaces, roads will be generally wet.

On Tuesday, the storm will have ended across the mid-Atlantic states and will end from west to east across southern New England. 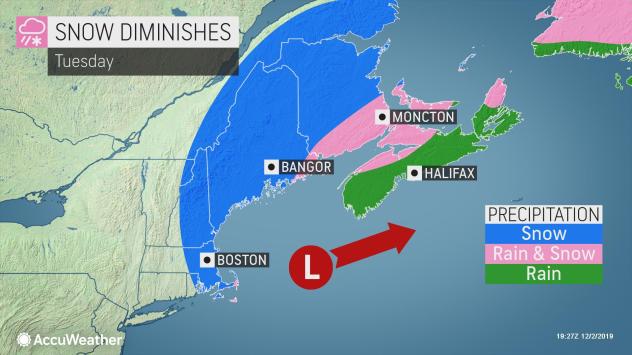 However, after spreading over much of Maine Monday night, the snow will continue much of the day on Tuesday. A general 6-12 inches is forecast for Maine with locally higher amounts.

Download the free AccuWeather app to check snow amounts in your area, as well as points along your travel route. Keep checking back on AccuWeather.com and stay tuned to the AccuWeather Network on DirecTV, Frontier and Verizon Fios.