"I want to fight Nazis," Lawrence Hoffman, who joined the United States Army in 1943, recalled saying at the time. And some bad weather was not going to stop him.

American war veterans who risked their lives to invade Normandy on D-Day spoke with AccuWeather and shared their recollections from more than three-quarters of a century ago about how weather conditions impacted their involvement leading up to and on the important day -- which took months to plan but was almost thwarted by bad weather.

Weather predictions for D-Day are widely considered the most important forecasts in history. Finding the right window and timing for nearly 160,000 troops to invade northern France was critical. The idea was to invade during a full moon so soldiers could see better, and also so the tides would be lower, allowing them to keep a closer eye on German defenses, according to AccuWeather Senior Vice President and Chief Operating Officer Evan Myers. “If they were not able to go in early June, they would have to wait at least two weeks, if not a couple of months,” Myers said.

There was a concern about waiting too long because invading during winter might have slowed down progress, and beginning any sooner than early June would’ve increased the likelihood that forces would contend with storms, according to Myers. Storms were expected to be on the decline as summer approached and progressed. “It was almost the perfect time from a calendar standpoint, but then the weather was the issue,” Myers said. 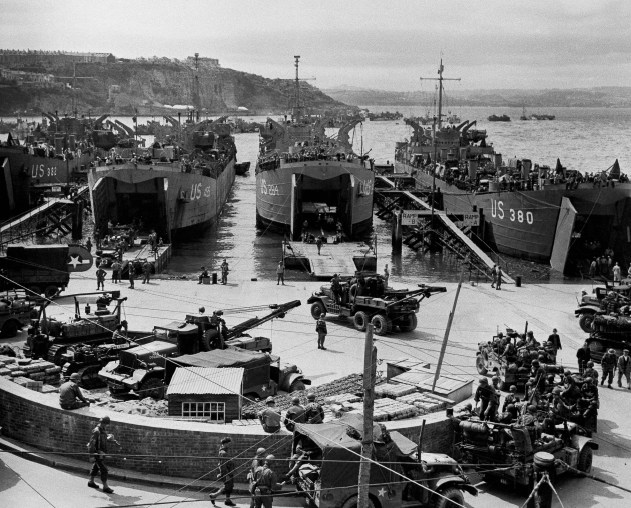 U. S. troops and vehicles pour into the open mouths of last landing ships at Brixham, England in June of 1944, as the allies assembled the greatest invasion fleet in history for the D-day landings on the European mainland. (AP Photo)

Prior to D-Day, the Allies had thrown several head fakes to trick the Germans, who did not believe that an invasion of Normandy was imminent. “They thought the Allies were going to invade farther up the coast at the Pas-de-Calais, which was much, much closer to England, and a much shorter distance across the Channel between England and France,” Myers said.

Because the seas were more open to Normandy, and therefore more likely to be churned up by weather, it didn’t appear at first glance to be a logical place for an invasion—and that’s what the Allied forces counted on.

As soldiers prepared for invasion at a naval base in Southampton, England, the weather conditions were “absolutely terrible,” said George Sarros, a World War II United States Navy veteran and Chicago native who served as a motor machinist on an LST (Landing Ship Tank). “It was cold, and the waves were terrible,” Sarros, who was 94 when he spoke with AccuWeather, said in an interview. “The English Channel is rough, and it’s cold. It’s never warm.”

The weather in England was known for being very unpredictable in the period before the invasion, remembered North Carolina native Ray Pegram, who was assigned to his squadron commander’s crew and trained in Aldermaston, England, where he was stationed prior to D-Day. “There was a lot of fog and messy rain, so I guess we were all apprehensive and waiting for the time [of D-Day],” he told AccuWeather.

Pegram’s plane was selected along with eight others to drop the 101st Pathfinders. He recalled the presence of clouds as they prepared for the attack. “It was partly cloudy, and we’d fly in and out of the clouds. We’d drop the paratroopers and we went back,” Pegram said. “I remember with first glider tow, we hit a fog bank and we were very nervous, but the formation separated by pattern, according to plan.” 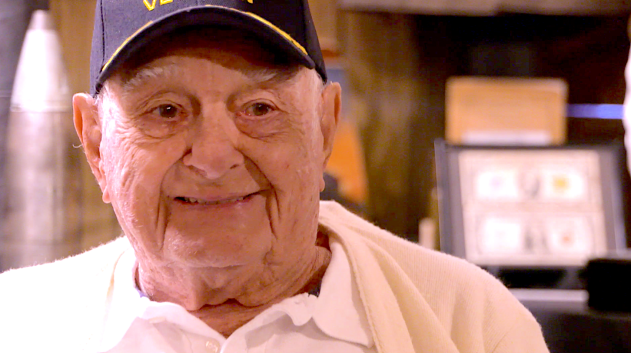 World War II veteran Lawrence Hoffman shared with AccuWeather his account of encountering certain weather conditions leading up to and on the day of D-Day on June 6, 1944.

For the paratroopers, Pegram explained, good weather was essential, because it was easier for them to assemble in those conditions. “Clouds prevented them from dropping to the ground close together like they wanted to,” Pegram said. “Because of the cloud cover, we had to break formation, so the first drops were very scattered. They had a hard time assembling on the ground because they were so scattered. But the next drops, we could do a better job putting them down together.”

Weather was the factor that stood out most during the battles for Lawrence Hoffman, a Brooklyn, New York, native who was drafted into the U.S. Army in 1943 and served as an artilleryman. When given the option to choose between heading to Japan or Europe for the war, Hoffman, a Jewish man, said, “I want to go to Europe. I want to fight Nazis.”

Throughout most of his time in Europe, weather conditions were cloudy and rainy, he told AccuWeather. “The weather is a very important thing. When an army advances, it needs all its people to work together. If one end of the army can’t work, you stop. That’s what happened at the Battle of the Bulge,” Hoffman said. “When the weather was bad, it was a whole month that the Air Force could not operate because of the weather and the cloud cover,” Hoffman added. “We stopped. There was nothing else to do.”

D-Day was planned for June 5 originally, rather than June 6. “The morning of June 4, dawned bright and nice, but by afternoon, it had turned stormy,” Myers said.

The Allies were in need of a break in the weather pattern—a 12- to 18-hour period when the conditions could calm down just enough to allow for troops to enter the beaches and begin to move inland. Captain James Martin Stagg, the top meteorological officer for the British Royal Air Force Group credited with making the history-altering forecast, indicated that he believed the required break period would occur between 12 and 24 hours centered on June 6. Because of this, the invasion was postponed by one day.

Sarros recalled that although June 6, 1944, was better weather-wise than other days, conditions were still chilly and unpleasant. “It was not like it was on the 4th, but it wasn’t calm, either. They couldn’t delay it anymore,” he said.

U.S. General and Supreme Commander of the Allied forces Dwight. D. Eisenhower was concerned that it might all go wrong, Myers said. However, the weather conditions did calm down somewhat on June 6, which allowed more troops to be landed. “For the first couple of hours, it was touch and go,” he said.

Because the Germans did not believe that Normandy would be the location of choice for the invasion and didn’t anticipate an attack due to the weather, they were caught off guard. “A lot of Germans, they didn’t know what to do when they saw us,” Hoffman recounted. “They were afraid, they would hide.”

Without that key element of surprise, it’s possible that the Allied invasion force could have been thrown back into the sea, and the liberation of Europe might have taken another year or more to achieve, according to Myers.

For Hoffman, there was never a doubt in his mind that the Allies would emerge victorious from the invasion of Normandy. “We were winning, and we were going to continue to win,” he said.