A 12-foot-large great white shark was spotted swimming off the coast of Sea Isle City, New Jersey, on June 4.

Two videos of great white sharks that surfaced within the past week appear to be the first sightings of the summer season of these giant predators off the coasts of Cape Cod and New Jersey.

In the first video shot on May 29, nearby boaters captured footage of a shark attacking a seal near a beach on Nantucket as screams can be heard in the background from shocked passengers on board.

A group of people on a boat witnessed a great white shark hunt down a seal for food off the coast of Nantucket, Massachusetts, on May 29.

A separate video shows a large, 12-foot great white swimming precariously close to a boat about a half mile off the coast of southern New Jersey on June 4.

"Look at this monster!" someone on the boat can be heard saying.

About 10 additional "great white" sightings have been reported along the East Coast as of June 7.

Other types of sharks have also been spotted: On Memorial Day, a commercial fisherman off the coast of Long Island filmed a mako shark squirming and struggling in shallow waters at Point Lookout Beach. The fisherman contacted state conservation officials, but within minutes the shark was able to free itself and swim off.

A fisherman helped a struggling mako shark that washed ashore near Point Lookout, New York, back into the water on May 30.

In the Nantucket sighting, the Atlantic White Shark Conservancy confirmed a great white shark was observed close to shore attacking a seal near the Great Point Lighthouse. The video of the encounter was first posted to Nantucket Current’s Twitter account.

The fin of the shark can be seen as the great white maneuvers toward the seal and strikes, with both marine animals thrashing about. The seal at one point is tossed into the air before the shark devours his prey and the water quickly turns red.

“Oh my God, you can see the blood!” one woman gasps amid screaming from those aboard a nearby boat.

It wasn’t clear how long the shark measured, although great whites are known to grow 11 to 20 feet long, according to AWSC.

Sharks are notorious seal predators and the blubbery mammals typically number in the hundreds in that area during the day. Many seals could be seen on the beach in the background during the Memorial Day weekend attack.

About a week later on June 4, Jim Piazza was bringing his new boat toward the shore after being out fishing for a few hours off the coast of Sea Isle City, New Jersey, when his son spotted a great white shark near Townsends Inlet.

"I almost ran it over. My son was like pointing to it like, 'Hey, there goes a shark.' And I'm like, 'No way!' So I made a loop around and we circled it for about 10 minutes. It was just kind of swimming north towards Ocean City," Piazza told WPVI-TV.

"I don't want it taking a bite out of my boat!" he's heard saying in one of two videos of the encounter.

His cousin Joe Piazza, of Norristown, Pennsylvania, was also on the boat and said it was the closest encounter he's ever had with a great white.

"It was incredible, it came right down the side of the boat. ... It didn't even know we were there," he told AccuWeather on Tuesday.

At first they thought it was a 20-footer but soon realized it was more likely at least 12 feet long.

"We wanted to touch it," but the others on board shouted 'No, no, no!'" Joe Piazza said.

Sharks are known to swim close to shore in shallow waters, according to experts. In fact, a 2020 study by the Massachusetts Division of Marine Fisheries, Atlantic White Shark Conservancy and Arizona State University researchers found that sharks visiting Cape Cod spend nearly half their time there in shallow waters (less than 15 feet deep). 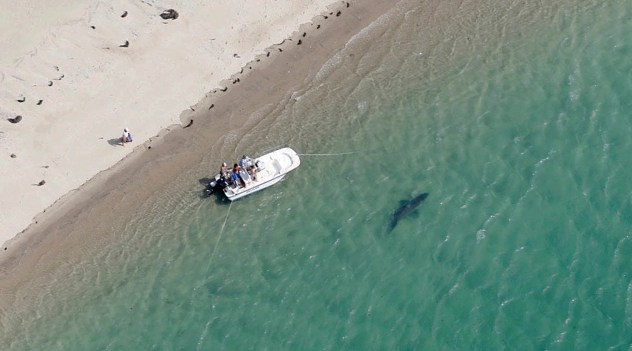 Yet shark attacks on humans are relatively rare. In fact, a person has a much greater chance of being killed by a lightning strike (1 in 79,746 chance) than being fatally attacked by a shark (1 in 3,748,067 chance), according to the International Shark Attack Files of the University of Florida.

Researchers saw 11 shark-related fatalities in 2021, with nine considered unprovoked. Australia tallied three unprovoked deaths, followed by New Caledonia. The United States, Brazil, New Zealand, and South Africa each had a single unprovoked fatal shark attack, according to the University of Florida. The one in the U.S. occurred in Central California on Christmas Eve.

The last deadly shark attack in New England was in Maine in July 2020. Yet white shark activity is quite high farther south, off Cape Cod's shoreline. Two years earlier, a man from Revere, Massachusetts, died after being bitten by a shark at Newcomb Hollow Beach in Wellfleet on the Cape on Sept. 15.

The first shark death of this year took place Feb. 12 in Mexico when a diver hunting for scallops was killed by a 10- to 13-foot great white shark, the University of Florida reported.

And although shark attacks, both fatal and non-fatal, occur throughout the world, one U.S. county has unfortunately earned the top global spot for having the most attacks last year – Volusia County, Florida, on the Sunshine State’s eastern shore reported 17 out of the 137 total shark attacks worldwide, according to Florida researchers.

The Atlantic White Shark Conservancy, based in Chatham, Massachusetts, started tracking shark sightings and movements in 2016 via its Sharktivity smartphone app and has been encouraging the public and officials to report such sightings as a way to protect both humans and marine life. The sightings are then analyzed and confirmed with the help of the New England Aquarium in Boston. Any verified sightings will immediately pop up as a blue fin icon in the app. Videos of shark sightings can also be uploaded to the app. 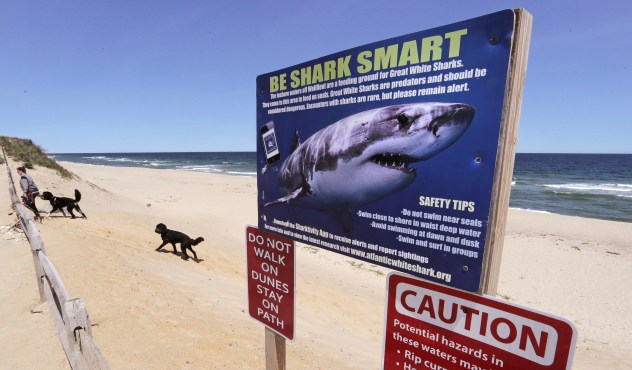 A woman walks her dogs behind a shark warning sign at Newcomb Hollow Beach in Wellfleet, Massachusetts, on May 22, 2019. The New England Aquarium and the environmental group the Atlantic White Shark Conservancy launched a project to use data collected about white shark sightings via an app to make beaches more safe. (AP Photo/Charles Krupa)

The app was developed with input from the Massachusetts Division of Marine Fisheries and the Cape Cod National Seashore to raise awareness among beachgoers.

“We have so many people who are out on the water, out on the coast,” Cynthia Wigren, chief executive officer and co-founder of the conservancy, told The Associated Press last month. “It really just adds to the collective knowledge. And it’s being provided right back to the public.”

In fact, five shark sightings all in one day in August 2021 prompted Nantucket’s harbormaster to shutter all southern beaches.

Officials said sightings usually peak in late summer and early fall, but caution that every beach day requires extra vigilance. For instance, sharks hunt for seals in shallow water, so beachgoers are typically warned to avoid areas where seals converge and are more prevalent, according to experts. As this past weekend's video from Long Island showed, sharks do occasionally make it to shore.

Experts have been studying how weather impacts shark behavior, bringing them closer to shore. Meteorologists and other researchers have paid particular notice to how strong sea breezes seem to correlate with an uptick in shark sightings.

Joe Merchant, a meteorologist at the National Weather Service office in Lubbock, Texas, theorized that the convergence along a sea breeze front starts a predatory chain reaction in the food chain below the surface. The sea breeze brings nutrient-rich, deep water closer to the surface, attracting tiny marine life that feed on the nutrients. Those small creatures attract larger fish, which, in turn, attract the ocean's largest predators, such as sharks, who are on the hunt for prey.

And a sea breeze is more likely on a sunny, warm beach day, according to AccuWeather meteorologists.

“The sun heats up the air over land faster than over water. The warmer air over land rises and is replaced by air coming inland from the ocean. This occurs mainly from late morning through the afternoon,” AccuWeather Meteorologist Brian Wimer explained.

Also, recent studies have even looked at how changing ocean currents and warmer waters may alter shark migratory patterns, bringing them closer to shore. The 2020 Massachusetts study revealed that sharks typically swam in water temperatures that ranged from 48 to 69 degrees Fahrenheit.