Incoming! Excitement builds for the return of ice giants

They're huge yet silent, looming large over small villages. And when spring arrives, a feeling of anticipation overtakes this small region as hundreds flock to the shores to witness the grand parade -- a true wonder of nature. 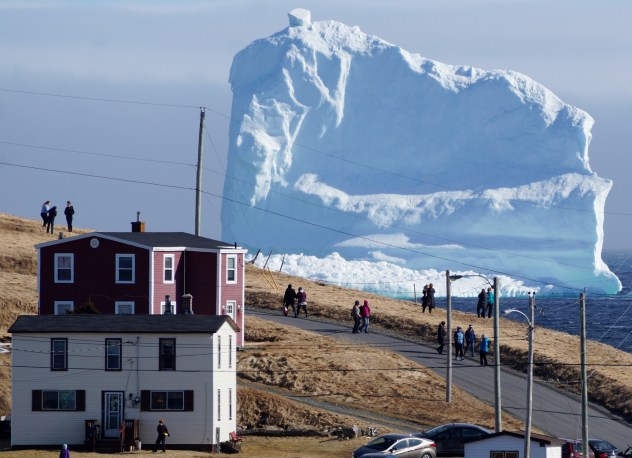 Residents view the first iceberg of the season as it passes the South Shore, also known as ‘iceberg alley,’ near Ferryland, Newfoundland, on April 16, 2017. (Reuters/Jody Martin)

The anticipation is almost palpable. Each year, local residents, and increasingly the tourists who have caught wind of this spectacle of nature, eagerly await the triumphant return of the monstrous icebergs.

One by one, and ever so slowly, an entire flotilla of massive chunks of ice several stories high gradually make their way near the shores of Labrador and Newfoundland, Canada, traversing the vast Atlantic Ocean as they make their trek south from Greenland.

“Newfoundland is beautiful” in so many ways, said Newfoundlander Diane Davis, “but there is nothing like cresting a hill and seeing the peak of an iceberg over a town or the next hill. In the right locations, you can spot an iceberg and still have to drive 15 kilometers (9.3 miles) to get to the coast to see it. The chase is as much fun as the view some days.”

Most years, hundreds of icebergs cleave or break off from glaciers and their one- to three-year nomadic journey begins. If the winds are favorable enough, they reach “iceberg alley,” an area of the Atlantic that roughly stretches from the coastal waters off Labrador in Canada, south along Newfoundland.

And each spring, the excitement builds and the amazing ice parade begins.

This year, it’s hoped, will be no different.

Newfoundlanders can never be sure. Last year proved a big disappointment, with only one iceberg making it across the 48th N parallel during iceberg season (generally April through July). Hardly a notable year compared to 2019, which boasted more than 1,500; the year before, 2020 saw a sparser turnout with up to 200 of the ice kings, according to Frédéric Cyr, Ph.D., a research scientist with the Fisheries and Oceans Canada in St. John’s.

The icebergs of Newfoundland

The amount of sea ice -- a good predictor of traveling icebergs -- this season is good news, he noted. Last year was one of the lowest sea-ice years on record.

“We’re more hopeful than last year because the sea ice is roughly within the normal range,” Cyr said.

And sightings are already popping up for 2022.

“They’re coming!” was the message one resident posted on Facebook with a shot of a berg in the distance from Pools Island. She and nearly 26,000 others belong to the Facebook group Newfoundland Iceberg Reports, where fellow “berg” enthusiasts discuss everything icebergs, share photos and monitor maritime charts and berg sightings.

“Iceberg sightings are a rare event for most people but so common to Newfoundlanders along iceberg alley that they often laugh at those of us so fascinated,” said Davis, who moved to the island in the 1980s to start her teaching career. 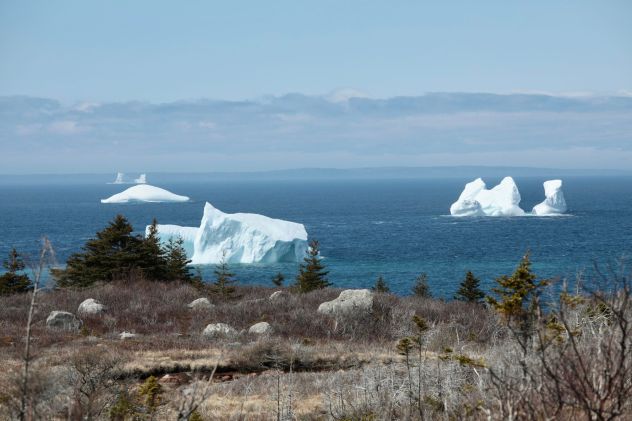 Icebergs traveling down the Atlantic Ocean from Greenland pass the shores of Newfoundland, Canada, in this 2019 photo. (Photo/Eric Temple)

In the past two weeks, she said, sightings and pictures have started trickling in from places like Little Harbour and Joe Batt's Arm on Fogo Island; Lumsden, Pool's Island; Musgrave Harbour; off Cape Bonavista “and yesterday, one yesterday visible from Long Island, Green Bay South.”

Meteorological and oceanographic conditions -- wind direction, ocean currents and air and sea temperatures -- also play a role and impact the flow of the icebergs, determining how big a bounty Mother Nature will serve up each year, according to the U.S. Coast Guard International Ice Patrol, which monitors the area off Labrador and Newfoundland for icebergs.

So residents and tourists alike are left wondering each year: Will the glistening giants come back en masse to dazzle their dozens of fans and onlookers?

Some nascent observers believe that stronger Labrador winds this spring may draw a larger number of the icebergs south.

“This year, we are getting more ice in the harbors, more seals and even polar bear sightings” in certain areas. “The same currents carry icebergs so this is a hopeful sign. Sightings in the past couple weeks confirm that some icebergs are getting closer to shore than last year,” said Davis.

Residents routinely check the maritime charts from the North American Ice Service (NAIS) to keep tabs on the icebergs’ whereabouts.

Five years ago during his first oceanography trip in his new position, Cyr was taken aback by the sheer size and number of these behemoths.

“It was super exciting to see," he recalled. "Icebergs were everywhere.”

The icebergs have become a major draw, giving rise to some iceberg tourism and delivering lucky onlookers in this small pocket of North America with a front-row seat to an amazing palatial parade. 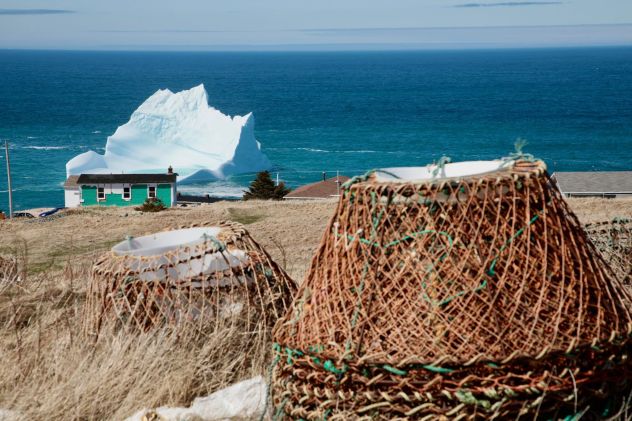 Icebergs traveling down the Atlantic Ocean from Greenland pass the shores of Newfoundland, Canada, in this 2019 photo. (Photo/Eric Temple)

A few here and there can get precariously close to shore, as one did in 2017, looming surreally large over the small village of Ferryland, Newfoundland.

Eric Temple of Utah, whose daughter lives in Newfoundland, has traveled thousands of miles twice to check out the icebergs -- in 2017 and 2019.

“Both years were excellent for icebergs. We're planning on going again in May, COVID willing. It's shaping up to be another good season,” he said.

Tour boats venture out for a closer look at any number of the many icebergs typically dotting the east coast of the island. However, they never get too close in case they continue to break up.

Davis said some seasonal shops and businesses will even open early in the season if many icebergs are spotted. Some crafters, artists and many photographers also feature iceberg-inspired products.

“It's hard not to be influenced creatively by something so impressive,” she said.

These mammoth icebergs in Greenland can reach up to 300-foot height above sea level. That, plus most of the icebergs are not visible, with 90 percent of an iceberg’s size lurking beneath the surface. Some take on odd shapes as they melt, even looking like ice castles by the time they pass along the Canadian shore.

One of Cyr's fondest memories was one time when his parents were in town visiting, and “we were driving and the horizon was just filled with icebergs; it was amazing.”

Aside from the shops, tour boats and Airbnbs that have sprung up, the iceberg season has also given rise to other business ventures, like bottled water. Icebergs and their parent glaciers form freshwater or snow, making it perfect for bottling.

Kerry Chaulk, manager of Dyna-Pro, bottles the iceberg water from those who head out each summer to harvest them and sells 750 ml bottles. Other places are also making beer and vodka from iceberg water.

"We’re probably a lot bigger today than we ever were with iceberg water, shipping overseas, Europe, Singapore, Dubai," Chaulk told AFP. "We just picked up clients from the Middle East with our glass bottles."

As many enjoy the icebergs and all of what they have to offer, some are concerned, hoping that future generations will be able to marvel at these giants of nature as many do today.

"Enjoy it while it lasts," Cyr said. "There’s no guarantee that we’re going to see these beautiful ice blocks in years to come because of climate change."