Burning throat or difficulty breathing this week? AccuWeather meteorologists say wildfires in Canada may be to blame.

Smoke and ash traveled 1,000 miles toward the northeastern United States as the result of large wildfires burning in Canada this week. The conditions forced air quality advisories to be issued in Pittsburgh, Philadelphia, New York City and Washington, D.C., where the smoke caused health problems. However, a cold front that passed through the region Wednesday helped to clear the atmosphere.

The Aqua satellite shows smoke descending from Canada into the Northeast from July 16 to July 20, 2021. (NASA/AQUA)

According to Plume Labs, the air quality index (AQI) reading in New York City reached 130 Tuesday night -- the second-highest this year. Philadelphia hit 124, indicating that the air had reached a very high level of pollution.

Effects were felt by individuals at risk, and everyone felt the effects of prolonged exposure. Residents of the northeast quadrant of the country who spent time outside this week may have experienced difficulty breathing and throat irritation. 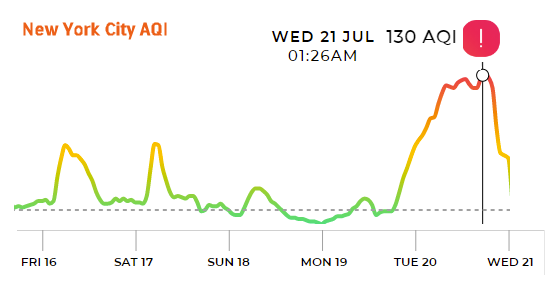 "Due to the fact that smoke particles are small and light, they can be transported hundreds if not a few thousand miles away from their source," AccuWeather Meteorologist Alex DaSilva explained.

In some areas, the smoke yielded vibrant sunrises and sunsets.

Wildfire smoke sweeps more than 2,500 miles across US

A smoky sunset could be seen ahead before the Philadelphia Phillies faced the New York Yankees in the Bronx, and haze muffled a view of the Statue of Liberty. Meanwhile, in Maryland, haze clouded the Baltimore skyline Tuesday, and the same was true of Boston. By Wednesday morning, the smoke had reached North Carolina.

A cold front that traveled southward from Canada cleared the smoke out of most of the Northeast on Wednesday. 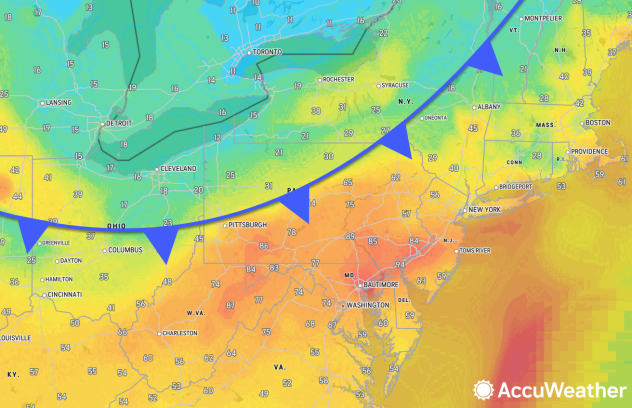 As of Wednesday morning, the front stretched from Ohio through Pennsylvania and into New England (AccuWeather/Plume Labs)

As of midweek, there were 147 fires burning in the U.S., according to a map from the USDA Forest Services. The largest of the wildfires sending smoke billowing into the atmosphere is the Bootleg Fire, which, at more than 600 square miles, was scorching an area half the size of Rhode Island, according to The Associated Press. The Bootleg Fire had become so enormous that it was generating its own weather.

Farther south, in California, firefighters were working to contain two large blazes. The Tamarack Fire in Alpine County forced officials to evacuate several communities and had grown to more than 60 square acres by Wednesday and the Dixie Fire, also in Northern California, was approaching a burn area of nearly 100 square miles, the AP reported.

The Northwest Interagency Coordination Center highlighted on Wednesday, July 21, that during this time last year, there had only been 13 large fires burning across Oregon and Washington, which claimed over 23,000 acres, compared to the 43 large fires the same states are seeing this year across more than 550,000 acres.

AccuWeather forecasters predicted back in May that a long and grueling fire season was ahead for the West, and smoke may continue to be a hazard in the coming months.

Space, weather come together for Friday night sky event How the Bootleg Fire is generating its own weather Man fatally struck by lightning at golf course