Air quality in NYC, Philly plummets due to smoke from 2,500 miles away

Satellite imagery shows smoke rising from multiple massive wildfires in the western U.S. and steadily crossing the country to the opposite coast.

After a smoky sunset Monday evening, heavy smoke continued to hang over the Northeast on Tuesday, as a result of more than 100 wildfires burning in the western U.S. and more in Canada. Air quality advisories were in effect for much of Canada and had been issued for Pittsburgh, Philadelphia and New York City as the smoke descended from the upper levels of the atmosphere.

The AQI reading in New York City Tuesday evening reached an unhealthy 137, the highest this year so far. At this elevated number, health effects can be immediately felt by sensitive groups. Healthy individuals may experience difficulty breathing and throat irritation with prolonged exposure, and should limit outdoor activity. 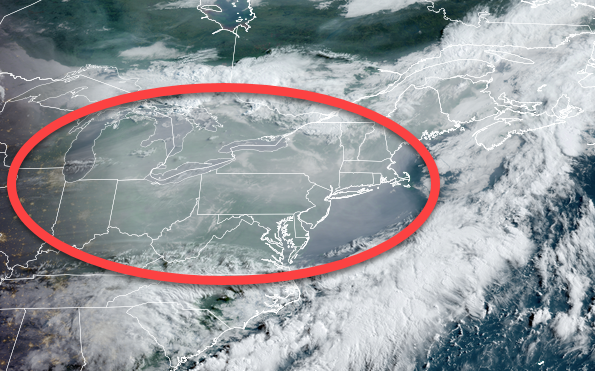 The smoke spread up to 2,500 miles downwind of the locations of the wildfires. "Due to the fact that smoke particles are small and light, they can be transported hundreds if not a few thousand miles away from their source," AccuWeather Meteorologist Alex DaSilva explained.

"While the smoke is not always thick enough to obstruct surface visibility, it is thick enough to create poor air quality in some areas and allow for vibrant sunrises and sunsets," DaSilva said.

Wildfire smoke sweeps more than 2,500 miles across US

Wildfire smoke consists of gases and fine particles from burning trees, plants, buildings and other burning materials, according to the U.S. Centers for Disease Control and Prevention (CDC). Anyone can get sick from inhaling the smoke, but those at particular risk are people with asthma, Chronic Obstructive Pulmonary Disease (COPD), heart disease, children, people who are pregnant, and first responders. 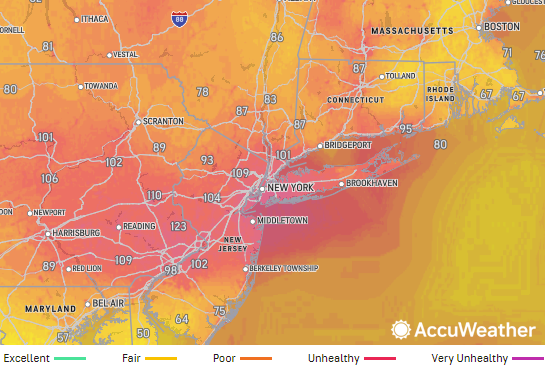 Air quality was in the unhealthy range in the New York City area on the afternoon of July 20, 2021. (AccuWeather/Plume Labs)

"Elderly individuals and people who may have breathing problems should try to avoid long periods of outdoor activity," DaSilva said, but overall most people in the Northeast won't be at risk.

"The smoke out West is a lot closer to the ground because that’s where the fires are," he explained. "It's more of a health concern out there."

Locations from Washington, D.C., all the way to the Great Lakes had ideal conditions to witness a colorful sunset Monday night and sunrise Tuesday morning, in areas without clouds.

"It's not a yearly occurrence, but it's happened before," Kines explained, adding that very high wildfire activity in the western U.S. is necessary for the smoke to make it across the nation.

But the chance to witness enhanced sunsets may be fleeting. Following Tuesday's sunset, DaSilva said, a cold front will move into the Northeast from Canada, clearing out some smoke in the process.

With five dozen large and uncontained wildfires, the national preparedness level in the U.S. is at five, which is the top of the scale and means the nation is currently at the highest level of wildfire activity and firefighting resources are at risk of being exhausted, according to The National Interagency Fire Center.

Meet Probie, an essential sidekick in Oregon firefighting efforts
How these 5 cities became the most intense urban heat islands
'We were just cooked': The heat wave that gripped the American heartland

More than a foot of rain has fallen in Orlando