A longtime timber worker and fire lookout tells AccuWeather that he retired over concerns that this year’s wildfire season could be catastrophic and deadly.

Having already devoured a span of acres that could swallow Los Angeles, the Bootleg Fire is now generating its own weather.

Since the flames took hold on July 6 in southern Oregon, the blaze has scorched over 399,000 acres and is only 38% contained, according to InciWeb. Lightning was determined to have ignited the blaze, and after two weeks of feeding off of the parched landscape wrought by an intense heat wave and months of drought, it has become the largest wildfire to burn in the West this year.

The Bootleg Fire has driven thousands of residents from their homes and threatens many more. At least 2,000 homes have been evacuated thus far, and another 5,000 are currently threatened by the blaze, according to The Associated Press. In addition, the fire has destroyed at least 70 homes and more than 100 outbuildings. On Monday, July 19, the blaze merged with the smaller Log Fire. 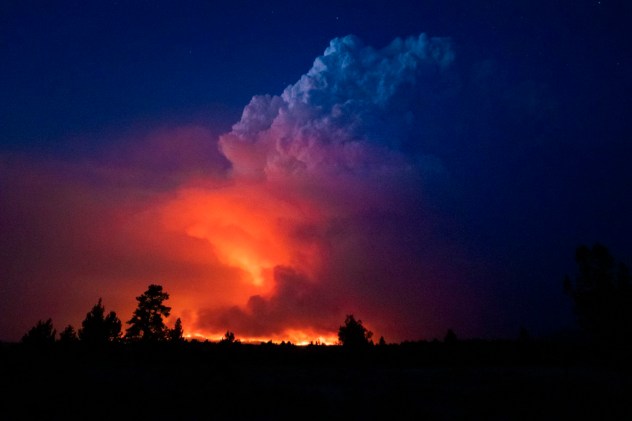 While crews are doing what they can to contain the flames, the fire is fighting back.

"The fire is so large and generating so much energy and heat that it's changing the weather," Macrus Kauffman, a spokesperson for the Oregon Department of Forestry, told The New York Times. "Normally the weather predicts what the fire will do. In this case, the fire is predicting what the weather will do."

But how does a wildfire change the weather?

In part, it creates its own clouds.

The #BootlegFire is now producing lightning within its explosive pyrocumulus cloud. As this fire creates its own weather, the volatile nature makes it extremely dangerous for firefighters. Smoke continues to pour into E Oregon & Idaho.#ORwx #IDwx #OregonFires pic.twitter.com/Xew8ixZ2oh

A cumulus cloud is formed as a result of a process that begins with the sun warming up the air that sits closest to the ground. That air then rises until it becomes saturated thousands of feet above the ground, forming the large cottonlike clouds.

A pyrocumulus cloud is formed through a similar process, but with fire added into the mix.

"A pyrocumulus cloud is similar to a normal cumulus cloud, but it is formed through large amounts of smoke from nearby wildfires," said AccuWeather Meteorologist Joe Curtis. "As a wildfire quickly heats the air near the ground, the thick, smoky air rapidly surges into the sky."

The result is a pyrocumulus cloud, or a "fire cloud." 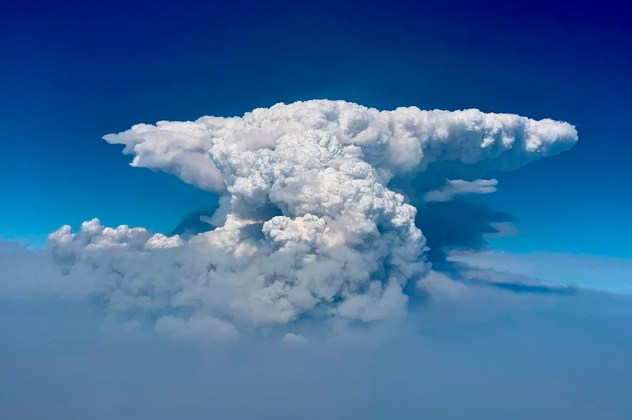 "Unfortunately, as long as a wildfire continues to burn at the surface, the pyrocumulus cloud will only grow larger over time," Curtis added.

Like their tamer counterparts, a pyrocumulus can grow into towering clouds, thunderheads that herald in strong winds and lightning -- both bad news for crews trying to contain a rampaging fire.

"This becomes a vicious cycle. As the wildfire burns, it creates a thunderstorm, which eventually leads to windy conditions at the surface, which allows the wildfire to grow even larger over time," Curtis said. The added fuel can often hamper the efforts of firefighters to quell the flames.

These pyrocumulonimbus clouds, as the evolved pyrocumulus clouds are called, are unlikely to bring any meaningful amount of precipitation. Unfortunately, like their cumulonimbus counterparts, they are also capable of producing destructive tornadoes.

At the Klamath National Forest, which sits on the California side of the state's border with Oregon, the U.S. Forest Service caught a video earlier during the month of July of a fire tornado as the Tennant Fire fueled the twister.

As the Tennant Fire burned through parts of Klamath National Forest, the U.S. Forest Service captured this video of a fire tornado whirling across the landscape on June 29, 2021. (Facebook/U.S. Forest Service)

Back in August of 2020, a "firenado" from the Loyalton Fire burning in Lassen County, California, was also caught on video. The National Weather Service in Reno had warned that the conditions of 60-mph winds with a pyrocumulonimbus posed "an extremely dangerous situation for firefighters."

A pyrocumulonimbus cloud is not required for creating a fire tornado or a fire whirl, however. Wildfires are also capable of creating their own wind patterns. As warm air rapidly rises in an updraft, it can create a vacuum at the surface near the fire, pulling in the surrounding air. As the process intensifies, it can result in a fire whirl.

As it feeds off of its own weather, the Bootleg Fire has surged in size to become the third largest fire in Oregon's history. The Long Draw fire of 2012 still stands as the state's largest fire at over 558,000 acres. 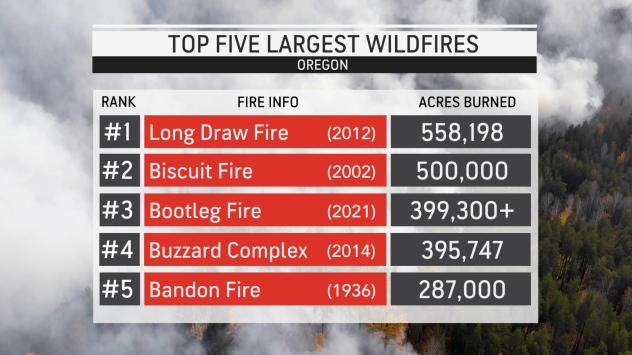 The fires that have the Bootleg Fire beat often burned until late fall or early winter, when the rain eventually doused them, according to the AP. Currently, officials are unsure how long the Bootleg Fire will continue to burn.

"We are running firefighting operations through the day and all through the night," Joe Hessel, the Bootleg Fire Incident Commander said on Monday. "This fire is a real challenge, and we are looking at sustained battle for the foreseeable future."

Air quality in NYC, Philly plummets due to smoke from 2,500 miles away
How destructive wildfires create their own weather
Meet Probie, an essential sidekick in Oregon firefighting efforts