Extreme Meteorologist Reed Timmer said this is the worst setup for severe weather he has seen in years. So far on Friday he was caught in a tornado and recalls what happened, and what he thought was dirt on his face, was something else.

What's it like to be inside a tornado as it's forming? Few people, if any, have experienced such a sensation, but Reed Timmer is now one who has -- and lived to talk about it after an extraordinary up-close encounter with a tornado on Friday evening.

Timmer started off on Friday with the goal of intercepting a tornado in his Dominator 3 vehicle, and by 6 p.m. CDT, he was staring a tornado in the face just west of McCook, Nebraska, amid a rapidly developing vortex.

"I was unable to get back to the vehicle and couldn't see it, so I just turned my back to the wind and hoped for the best until it passed," Timmer said on Friday after the tornado encounter.

Timmer was about 50 feet away from vehicle when the dust cloud arrived, significantly reducing his vision. 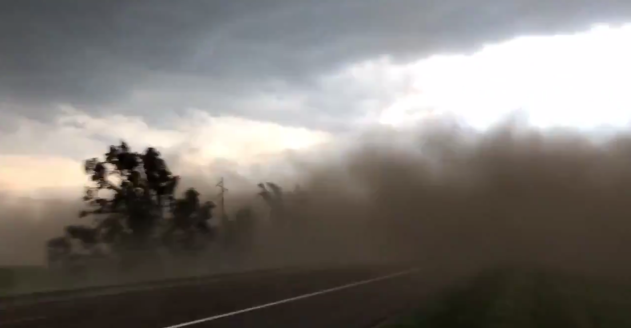 A wall of dust and debris kicked up by the tornado that landed on Reed Timmer on Friday afternoon near McCook, Nebraska.

As the twister bore down, Timmer could barely see more than a few feet away due to the amount of dirt, dust and debris whipping around. Amid the whirlwind, Timmer's hat went flying off his head and became part of the tornado.

“[I] just intercepted the tornado on foot,” Timmer yelled after the twister had passed overhead.

Timmer was left covered in what he initially thought was dirt, only to realize later that it was more likely field manure. Not only was he covered in this manure but so was the inside of his Dominator 3 vehicle, from the doors being left open as the tornado blew through.

"I was digging that field manure out of my ears, and it was covering my face as well, all over the inside of the vehicle,” Timmer said. 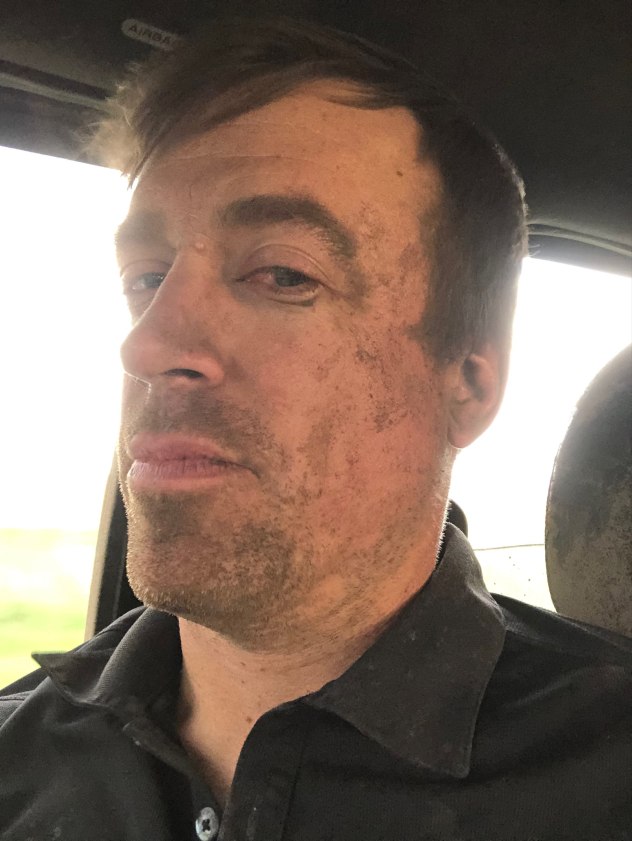 A photo of Reed Timmer after he was hit by a tornado on Friday afternoon west of McCook, Nebraska. While Timmer initially thought that it was dirt, it turned out to be manure, as he was situated in a manure farm.

Timmer appeared on the AccuWeather Network on Saturday to talk about his experience, and said that he knew the twister was going to be a weak tornado. He also stressed the importance of tornado safety.

"You never want to get that close to a tornado unless you have a vehicle like this [Dominator 3 vehicle]," Timmer said.

This was one of the biggest days for severe weather in the central U.S. so far this year, and Mother Nature shows no signs of stopping.

"Tornado Alley is certainly waking up with significant severe weather," Timmer said on Thursday while commenting on the impending outbreak of storms. Little did he know, a tornado was going to wake up right on him. Timmer, who holds a Ph. D. in meteorology from the University of Oklahoma, is no stranger to close encounters with big tornadoes.

Three years ago, Timmer captured spectacular close-up footage of an enormous EF2 tornado swirling in Wray, Colorado. The footage of the monster twister proved to be a sensation online, going viral and sparking awe-inspired headlines by many news sites. YouTube video of the tornado has amassed nearly 30 million views since it was posted three years ago.

In the past, he has acknowledged the inherent risk of what he and other storm chasers do. "Life is incredibly fragile," Timmer remarked recently, adding, "and I hope storm chasers continue to work hard to practice their hobby safely during this storm season and beyond."

The tornado that tracked near McCook, Nebraska, on Friday was one of several major tornadoes that touched down across the region.

Timmer will continue to track the severe weather targeting the nation's heartland early this week (note new link), with every day bringing the risk for damaging storms and tornadoes through Tuesday.

Other storm chasers also captured photos and video of the McCook tornado, like the one below shot by storm chaser Greg Johnson and posted on Twitter.

Here is another shot from today's tornado near McCook, Nebraska. We we're roughly 1km from the base of the tornado. I will post video shortly. @USTornadoes @stormfrontfreak pic.twitter.com/ld1iuWqozp

Download the free AccuWeather app to receive severe weather watches and warnings on your mobile device. Keep checking back for updates on AccuWeather.com and stay tuned to the AccuWeather Network on DirecTV, Frontier and Verizon Fios.