Dozens of tornadoes reported in Nebraska, Kansas as severe weather slams central US

All modes of severe weather are beginning as severe weather threats are becoming reality in the Midwest. AccuWeather's Extreme Meteorologist Reed Timmer was on the spot and captured this tornado forming in Nebraska.

Powerful thunderstorms erupted across the central U.S. on Friday afternoon from western Texas through Nebraska, unleashing dozens of tornadoes.

There were nearly 40 preliminary tornado reports in Nebraska and Kansas on Friday and Friday night, according to the National Weather Service's Storm Prediction Center (SPC). Many of these twisters were spawned by two separate violent storms, known as supercells, that tracked for hundreds of miles.

The multi-day severe weather outbreak first got underway Thursday across the parts of Iowa, Illinois and Indiana. Wind gusts of 86 mph were recorded in Washington, Iowa, while hail the size of baseballs fell in Westville, Illinois. A tornado was reported in Sheridan, Illinois, about 50 miles southwest of downtown Chicago. No injuries were reported.

More powerful thunderstorms erupted across the central U.S. on Friday afternoon from western Texas through Nebraska. The strongest of the storms focused on central Nebraska, spinning up several large tornadoes.

Around 5:45 p.m. CDT, a tornado was reported near McCook, Nebraska. SPC reported tree and power line damage along with minor damage to a farm. As the storm tracked northeast, is spun up two tornadoes near Farnam, Nebraska around 7:26 p.m. CDT.

Later in the evening, a tornado was reported near Dodge City, Kansas, tracking just southeast of the city.

AccuWeather Extreme Meteorologist Reed Timmer was reporting from Nebraska for the AccuWeather Network and intercepted a tornado on foot near McCook, losing his hat in the process.

TORNADO INTERCEPT in Dominator 3 with drones in the air!! Tornado intensified to the north then roped out @SeanSchofer @breakingweather @accuweather @skyforcex pic.twitter.com/TyUOtkTNRN

“Tornado Alley is certainly waking up with significant severe weather," Timmer said while breaking down the multi-day outbreak. Earlier this past week, he said this is the worst setup for severe weather he has seen in years.

Meanwhile, Blake Naftel, AccuWeather video journalist, intercepted a tornado near the border of Kansas and Oklahoma on Friday evening.

Some of these same areas were struck with severe weather once again on Saturday.

By Sunday, the threat for damaging storms will continue to push eastward into the Great Lakes and Ohio Valley.

Download the free AccuWeather app to stay alert to severe storm and tornado warnings in your area. Keep checking back for updates on AccuWeather.com and stay tuned to the AccuWeather Network on DirecTV, Frontier and Verizon Fios.

Scroll down for the severe weather reports from Friday:

A new severe thunderstorm watch has been issued for portions of southeast Nebraska and northeast Kansas as severe weather dangers continue overnight. While damaging winds, hail and downpours have become the primary threats with the storms, the risk of a tornado will continue into early Saturday morning.

A brief rope tornado was spotted near the Barton-Stafford County line 6 miles south of Great Bend, Kansas, according to a National Weather Service trained spotter.

A severe thunderstorm watch has been issued for parts of Kansas and Nebraska until 4 AM CDT pic.twitter.com/UyvjFkWuHL

A confirmed tornado continues to track across central Kansas northeast of Dodge City. This continues to be a particularly dangerous situation.

A wind gust of 76 mph was clocked at Russell, Kansas, as a line of powerful thunderstorms moved through the town.

A confirmed tornado continues to spin just east of Dodge City, Kansas. This is a particularly dangerous situation. People in the path of this storm should seek shelter immediately. The tornado will be difficult to see since the sun has set.

A confirmed tornado is located just south of Dodge City, Kansas, and is tracking toward the northeast. People in and east of Dodge City should seek shelter until the storm has passed.

— Breaking Weather by AccuWeather (@breakingweather) May 18, 2019

Three more tornadoes touched down within the hour of the tornado near Farnam, Nebraska.

The first occurred near the Oklahoma-Kansas border between Forgan, Oklahoma, and Meade, Kansas, around 7: 35 p.m. CDT.

About 20 minutes later at 7:54 p.m. CDT, a large tornado touched down just north of Cozad, Nebraska. The SPC reports the tornado kicking up dust and debris.

A rain-wrapped tornado tracked through Eddyville, Nebraska, around 8:21 p.m. CDT.

Another tornado from the same storm that spun up the tornado near McCook briefly touched down near Farnam, Nebraska around 7:26 p.m. CDT. It downed trees and power lines, and local law enforcement has blocked off certain roads according to the SPC.

A tornado touched down near Stockville, Nebraska around 7:07 p.m. CDT. It is currently tracking towards Interstate 80. It can also bring blinding downpours and hail to people driving along the interstate.

This tornado was near Stockville, not Stockdale.

Another tornado touch down in Nebraska amid severe weather in Hitchcock County a few miles outside of McCook around 5:45 p.m. CDT. The Storm Prediction Center has reported tree and power line damage along with minor damage to a farm.

While severe weather unfolds in Nebraska and Kansas, a supercell moving across Texas begins to stir up trouble of its own.

Severe thunderstorms are developing in northern Kansas and central Nebraska. Golf ball-sized hail has been reported north of Goodland, Kansas, and near Thedford, Nebraska. 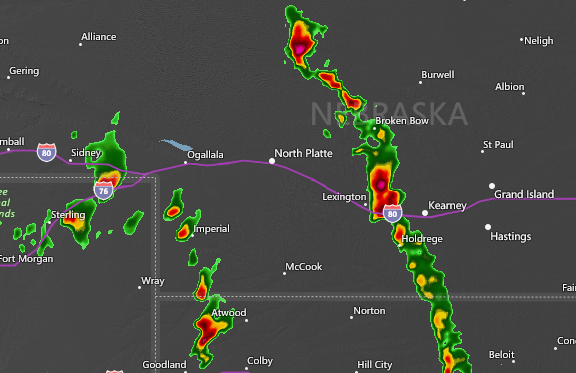 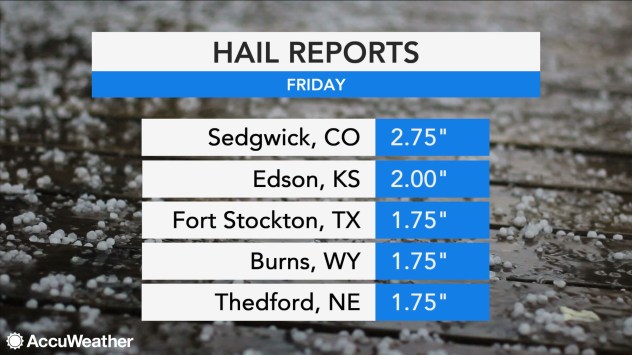 A tornado watch and a severe thunderstorm watch have been issued in the central U.S., covering parts of northeastern Colorado, southeastern Wyoming, central Nebraska and northwestern Kansas. This means that conditions are favorable for thunderstorms to develops in the next few hours that could produce tornadoes or other forms of severe weather.

Additional watches are likely to be issued by the National Weather Service later this afternoon and evening across the region. 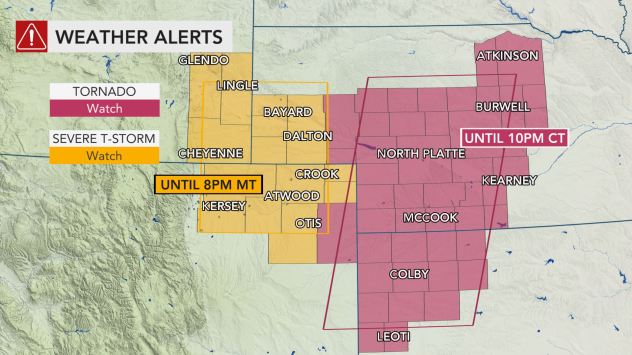