Officials in Toms River say the road elevation projects will never eliminate all flooding, but will help prevent nuisance flooding and limit the frequency of these issues.

AccuWeather forecasters say that while locations in the Appalachians and Ohio Valley will have a sharp cooldown on Sunday as a front slides through, a bulge in the jet stream will continue to act as a roadblock in the atmosphere, keeping hot weather in place closer to the East Coast.

Saturday's highest temperatures were generally recorded in the mid-Atlantic, with mainly sunny skies allowing temperatures to quickly surge during the afternoon hours. Washington, D.C., recorded a high of 92 F, which is 14 degrees above the average high for the date of 78 F.

"With a lack of cloud cover or precipitation to keep the heat in check, temperatures were able to steadily rise throughout the afternoon, helping allow for the extreme heat that was felt in many places," said AccuWeather Meteorologist Thomas Geiger. 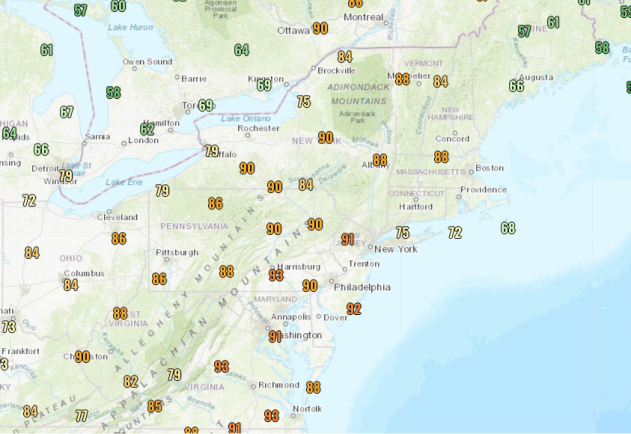 On this image taken Saturday afternoon on May 21, 2021, the mid-Atlantic and Northeast were largely free of cloud cover allowing for temperatures to soar, while clouds in Maine and Michigan kept temperatures at bay. (National Weather Service/ NOAA Weather & Hazards Viewer)

In Baltimore, Maryland, the mercury surged to a high of 95 F just hours before the post time for the Preakness Stakes, becoming the hottest race day in over 30 years for the event. The temperature also came dangerously close to the record for the date set in 1934, when temperatures climbed to 96 F.

The heat was similarly intense in areas farther north. Philadelphia reached 95 F while tying their 1934 record for the date. While a high of 90 F in New York didn't threaten any records, it was the hottest day of the season so far.

Temperatures in the 90s surged deep into New England. Montpelier and Morristown, Vermont, both logged their first 90-degree days on record for the date, narrowly beating the highs of 89 F set just last year.

Throughout the Northeast, many other cities logged daily record highs, according to data compiled by the National Weather Service. Altoona, Pennsylvania, Atlantic City, New Jersey, and Richmond, Virginia, were just some of the cities that set records on Saturday.

Despite this, the heat was not felt everywhere in the Northeast. In much of New England, mainly near the coast, stubborn cloud cover helped to keep temperatures in check. The most notable impact was in Boston, where temperatures only reached 71 F as areas farther inland scorched. In Worcester, Massachusetts, just 30 miles away, the mercury reached 88 degrees.

"The lack of high heat in coastal cities like Boston can be traced to the fog and low clouds that persisted throughout the day. Without the direct sunshine that was seen in inland locations, temperatures remained steady for much of the day," Geiger explained. 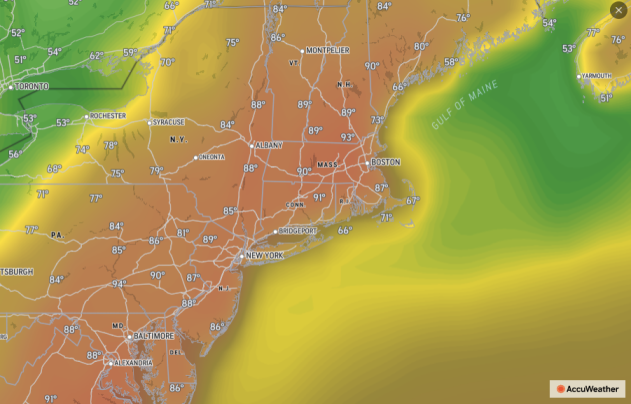 Regardless of where the hottest weather was focused on Saturday, another round was in store for Sunday. Philadelphia recorded a high of 91 degrees on Sunday, while Boston got to 88.

Portions of southern New England, especially those away from the coast, had even higher temperatures. In Hartford, Connecticut, the temperature peaked at 92.

Even as far north as Maine, abnormally warm weather continued. A high of 86 for Augusta, Maine, was well above the average high of 68 F for the date. 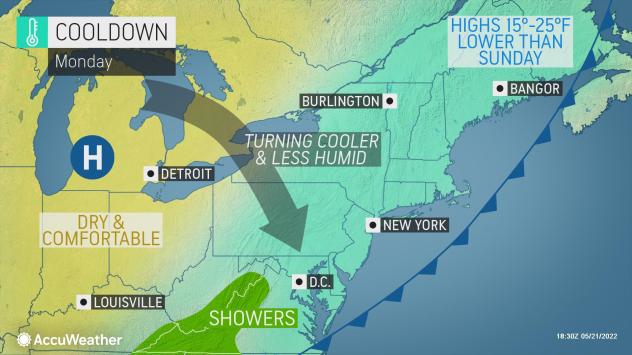 Those looking for relief from the heat will not have to wait long. Evening showers and thunderstorms on the East Coast will be followed by a dip in the jet stream and a sharp cooldown on Monday, with temperatures returning to nearly seasonable levels to start the workweek.