Lawmakers warned at a House hearing that unidentified aerial phenomena, or UFOs, must be investigated and taken seriously as a potential threat to national security. 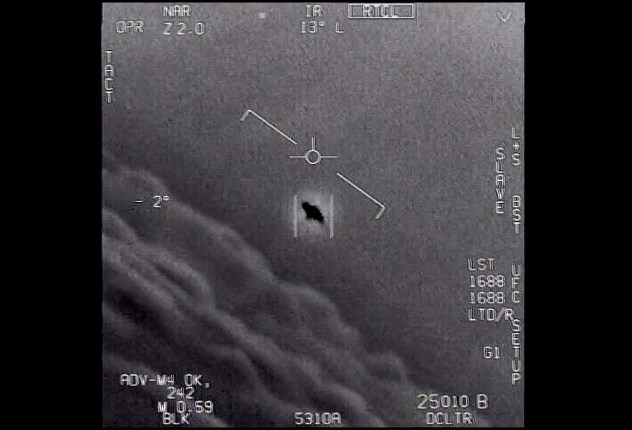 This image from video provided by the Department of Defense labelled Gimbal, from 2015, an unexplained object is seen as it soars high along the clouds, traveling against the wind. “There's a whole fleet of them,” one naval aviator tells another, though only one indistinct object is shown. “It's rotating." (Department of Defense via AP)

May 17 (UPI) -- Pentagon officials told a House panel Tuesday that reports of "Unidentified Aerial Phenomena" are getting more frequent -- and there is not always a ready explanation.

They said some of the reports by service members have turned out to be classified experimental technology by the military, civilian assets such a drones or previously unknown technology by adversaries.

But they said some sightings don't fall in any of those categories, with objects appearing to move and at speeds that defied known modern physics. While some are simply eyewitness accounts, others have been recorded by radar and other instruments.

"Since the beginning of 2000s, we have seen an increasing number of unauthorized or unidentified aircraft or objects in military-controlled training areas and training ranges and other designated airspace," Bray told the committee. "Reports of sightings are frequent and continuing."

Bray deferred to talk about many of those incidents in an open session because the technology used to record the objects is classified.

Moultrie and Bray said there has been more reports of UAPs by military personnel because of better technology, and more people feel more comfortable reporting it because of the seriousness of the work. They said fewer service members feel stigmatized by reporting UAPs.

Bray assured the subcommittee that its work into UAPs carries serious risk and responsibility to the Pentagon, where officials work to stay on top of new technology developed by adversaries.

"Incursions within our training ranges by unidentified objects represents serious hazards to safety of flight," Bray said. "In every aspect of naval aviation, the safety of our crews is paramount. Second, intrusions by unknown aircraft of objects pose potential threats to the security of our operations."

Moultrie oversees the Pentagon's Airborne Object Identification and Management Synchronization Group, which was established by the 2022 National Defense Authorization Act and is tasked with detecting identifying and attributing "objects of interest in special use airspace and to assess and mitigate any associated threats to safety of flight and national security."

A June 2021 report from the team's predecessor, the Unidentified Aerial Phenomenon Task Force, concluded there wasn't enough information to draw conclusions about 143 of 144 reports of UAP that had been submitted by government sources between 2004 and 2021. The one that was explained involved a large, deflating balloon.

The report noted "unusual" aerial activity on several of the reported incidents but did not rule out the possibility that they were caused by "sensor errors, spoofing or observer misperception." It added that "rigorous" further analysis was required in those cases.

Tuesday's was the first open hearing on UFOs in Congress in more than a half-century. The Air Force, following a public investigation known as Project Blue Book, concluded in 1969 that no UFO had ever threatened national security, that objects it studied did not display technology beyond what was presently known and that no evidence indicated any of the reported objects were extraterrestrial in nature.