The extreme heat that will envelop the Eastern U.S. could be enough for the record books as temperatures soar at the Preakness Stakes. Plus, will the toasty weather favor a horse that was bred in Florida?

The hottest weather since last summer will build over the Northeast this weekend, challenging daily records with widespread highs in the 90s F.

The Preakness Stakes is set to take place this weekend, and AccuWeather forecasters say yet another leg of the Triple Crown could be impacted by the weather -- this time soaring high temperatures that just may result in conditions suited for one horse that was bred and trained in Florida.

Known as "The Run for the Black-Eyed Susans," the Preakness is set to begin at 7:01 p.m. EDT on Saturday, following what is expected to be a scorcher of a day across the Baltimore area as well as the eastern United States.

AccuWeather meteorologists have been warning that an intense summerlike heat will take over much of the Northeast and the mid-Atlantic on Saturday, bringing many cities the first 90-degree day of the year, as well as the hottest day since last summer for some.

"Daily record highs that have stood since the World War II and Great Depression eras will be challenged at a number of locations," said AccuWeather Senior Meteorologist Alex Sosnowski of the predicted heat on Saturday. 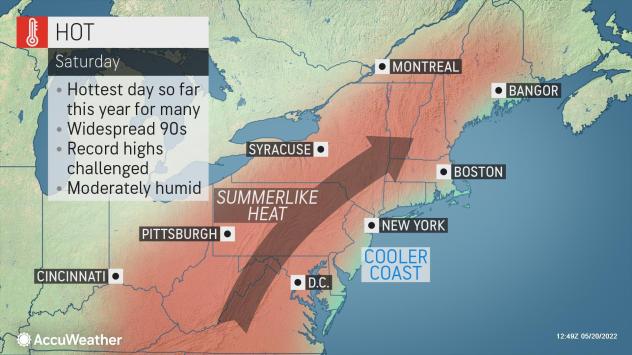 Baltimore, home of the Pimlico Race Course and the Preakness Stakes, is just one of many cities that will be nearing the daily record high temperature. Temperatures in the Charm City are expected to come close to the record of 96 degrees, set in 1996, on Saturday afternoon. Currently, a high of 94F is forecast.

Temperatures this high are more akin to July and thus well above normal for the second half of May, when the average high temperature is more like 78 degrees.

In addition to being one of the hottest May 21s on record, Saturday could also go down in the record books for a different reason: the hottest Preakness Stakes in recent history.

It's not unheard of for Baltimore to top 90 degrees in May, but by the luck of the calendar, these warmer days have not coincided with the Preakness. In fact, only three times in the last 30 years has the temperature in downtown Baltimore exceeded 90 degrees on race day. The most recent was on May 16 of 1998 when the temperature reached 93 degrees. The thermometer topped 90 again in 1986 and 1984, reaching 93 and 91 degrees respectively.

The summertime heat could be dangerous for spectators attending the event this year. With sunny skies and a very light breeze, AccuWeather RealFeel® Temperatures are expected to peak around 100 degrees on Saturday afternoon. In order to ward off any heat-related illnesses, racegoers should be sure to drink plenty of hydrating beverages, like water, as well as dress in light-weighted clothing and seek out shaded spots ahead of the start of the race. 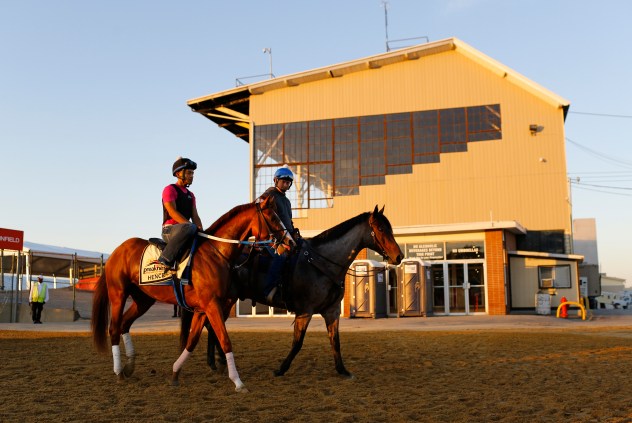 While temperatures will fall some ahead of the early-evening start, temperatures are likely to still be around 90 degrees as the horses load into the gates.

In addition to affecting those attending the race, the outcome of the race itself could also be impacted by the heat.

"Horses deal with heat much like humans do, as their primary method of cooling is through sweating. On a pretty humid day with not a whole lot of wind like Saturday, that becomes more difficult, so tracks will have more hoses and more water available to cool down the horses,” said AccuWeather Senior Meteorologist and horse-racing aficionado Brian Thompson.

Staying well-hydrated will help the horses to perform their best during the race. However, experience may play into the outcome as well.

“Some horses are more experienced with these conditions than others. Looking at the Preakness field, Simplification was bred in Florida, and longshot Skippylongstocking raced in the South Florida heat a few times last summer,” Thompson explained.

The heat expected to impact this weekend's race is a stark contrast from what horses and jockeys experienced at the first leg of the Triple Crown, the Kentucky Derby, just two weeks ago. Following a wet Friday afternoon, the track was muddy on Saturday, May 7, and temperatures reached only the mid-60s in Louisville that afternoon.