High temperatures ranging from the upper 80s to triple digits are possible from North Carolina to Maine this weekend in what could be the hottest day of the year so far for many.

High temperatures ranging from the upper 80s to the mid-90s are on the way for close to 100 million people in the Northeast this weekend as stifling heat typical of the middle of summer will be felt from Ohio to North Carolina and Maine.

In many areas, the heat and humidity this Saturday and Sunday will bring the hottest conditions since last August, and in some locations, record highs for nearly 100 cities that have stood for more than a century could be broken, AccuWeather meteorologists say. 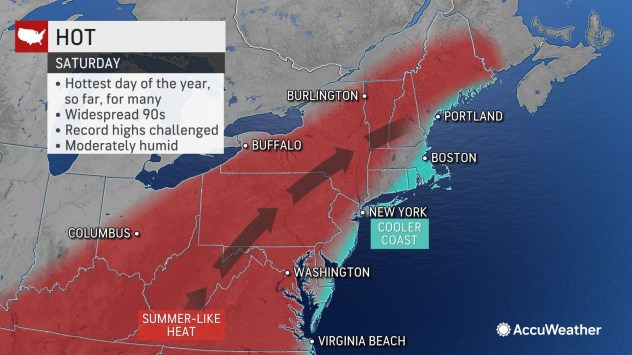 Daily record highs that have stood since the World War II and Great Depression eras will be challenged at a number of locations. At Philadelphia, temperatures could tie the record of 95 set in 1934 on Saturday. In both Raleigh, North Carolina, and Albany, New York, the daily records for Saturday, May 21, were set in 1941, and both could be in jeopardy Saturday afternoon. Raleigh already reached 95 on Friday, which broke the record of 94 set in 1938.

Temperatures in Baltimore are also forecast to come close to the daily record high of 96 degrees on Saturday, while the city hosts the Preakness Stakes. The second leg of the Triple Crown could be the hottest one so far this century, with temperatures failing to even reach 90 degrees the day of the race. Since 2000, the warmest day of the race was in 2004, when the city of Baltimore recorded 87.

Temperatures are forecast to reach the lower 90s in Pittsburgh on Saturday, which could tie the daily record of 92 that dates back more than 100 years ago to 1911. A temperature of 92 degrees was recorded last on June 29 in the Steel City.

When combined with surging humidity, strong May sunshine and other factors, AccuWeather RealFeel® Temperatures will approach dangerous levels from near to above 100 for several hours Saturday afternoon.

Weather conditions have ranged from stormy to less than ideal in coastal areas of the mid-Atlantic during the past two weekends, but for those who have been yearning for a weekend getaway at the beach and a way to beat the heat, Friday, Saturday and Sunday could be good days to do so from North Carolina to New England. 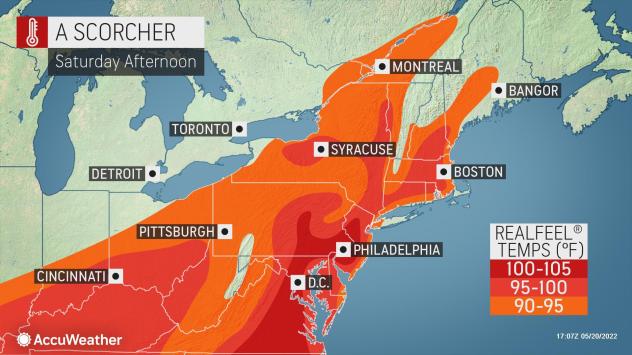 Predicting temperatures within a few miles of the Atlantic Ocean or its bays and estuaries can be tricky during the spring and early summer, forecasters say. The chilly water can hold temperatures back by a few to a dozen or more degrees, provided a sea breeze develops. In some cases, it can get chilly right along the beach due to the persistent winds.

On Saturday, temperatures are likely to surge quickly during the midday hours but may fall back a bit during the afternoon, in locations where a sea or bay breeze develops. Atlantic City and New York City are among some of the population centers that could experience local cooling effects from the water later Saturday. The record of 93 set in 1996 in New York's Central Park could be challenged prior to any sea breeze. Provided winds remain out of the southwest and do not kick in from Massachusetts Bay, Boston could surge into the lower 90s on Saturday. The record is 93 set in 1921.

Experts say those heading to the beaches this weekend should be mindful of the water temperatures, which are currently far from midsummer levels, and will also need to be mindful of the dangers of cold water shock. 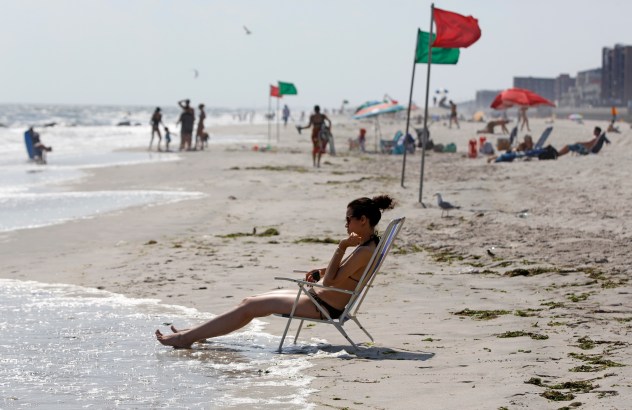 Waves roll in as a woman seated in a beach chair dips her toes in the ocean, Wednesday, July 19, 2017, at Long Beach, New York. Temperatures in the 90s drew hundreds to the beach where a sea breeze cooled them off. (AP Photo/Kathy Willens)

Ocean water temperatures in Northeast coastal waters are still chilly during the second half of May. Surf temperatures this week range from the icy 40s along the southern Maine coast to the cold 50s from the southern New England and New Jersey beaches to the chilly 60s from Maryland to Virginia. Water temperatures consistently in the 70s are not found until the Outer Banks of North Carolina.

Another hazard some beachgoers may face this weekend is damage from the barrage of rough surf earlier in May. The same storm that brought two days of rain during the Mother's Day weekend spent the following week lingering just offshore. While the storm did not evolve into a tropical system, stiff northeasterly winds from the storm set up a chain reaction that resulted in powerful waves tearing into the sand on many beaches.

Residents in the Northeast will also need to be alert for developing thunderstorms this weekend.

"Very warm and muggy conditions are in store Saturday night, and that will set the stage for hot and humid conditions on Sunday along much of the Interstate 95 corridor, despite increasing cloudiness produced by the approaching cool front from the Midwest," AccuWeather Lead Long-Range Meteorologist Paul Pastelok said.

Temperatures may once again approach record high levels with highs forecast to be well into the 80s and 90s along much of the Interstate 95 corridor.

As that front approaches, showers and thunderstorms can occur at any time on Sunday over the Appalachians and eastern Great Lakes region. 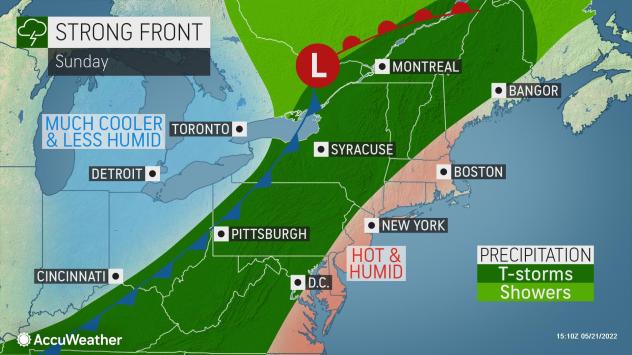 Some of the storms that cut into the heat later in the weekend could become severe and bring the risks of strong winds, flooding downpours and hail.