Dust carried all the way from Africa's Sahara Desert could arrive in the skies of the Gulf Coast states over the weekend, bringing not just hazy sunsets but also possibly hazardous health impacts.

Tropical systems have formed earlier and earlier in recent years, and AccuWeather's Dan Kottlowski explains what allows that early development.

The first trans-Atlantic Saharan dust cloud of 2022 could approach the Gulf Coast states this weekend, bringing the possibility of health hazards along with hazy skies.

The enormous plume of dust referred to as a Saharan Air Layer (SAL) is made of dry air carrying dust from the Sahara Desert as it embarks on a journey across the Atlantic Ocean. The dust makes its annual trip from May to August and can reach as far as the central United States, spiking air pollution and agitating health issues.

As of Thursday, the dust was over the Caribbean, with computer model simulations projecting that the dust cloud will sweep across the Gulf of Mexico before it could possibly reach the shores of the U.S. Gulf Coast.

"A large batch of dust was evident on satellite photos from the start of this week and was beginning to enter the Caribbean," AccuWeather Senior Meteorologist Alex Sosnowski said. "It is possible, but not a certainty, that this dust will make the trip as far as the Gulf and south-central U.S. late this week or this weekend. Some of the dust is probably going to reach Florida. The biggest impact will be to make the sky appear hazy, but it can also give extra color to sunrises and sunsets."

A hazy sunset is one of the more notable characteristics that the Saharan dust can bring, similar to wildfire smoke that drifts eastward across the U.S., resulting in hazy skies.

There is a "pretty good" area of dust now crossing the main development region of the tropical Atlantic, and this will bring hazy skies to the eastern Caribbean during the next couple of days, according to AccuWeather Hurricane Expert Dan Kottlowski. "The dust seems to dissipate with time and probably won't be much of an issue as it moves farther west," he said. 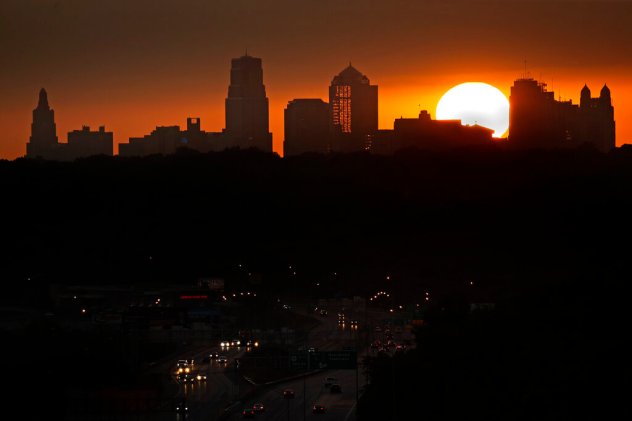 The sun sets beyond downtown Kansas City, Mo., Saturday, June 27, 2020. Sunsets and sunrises are more vibrant than usual lately due to dust in the atmosphere from the Saharan dust cloud. (AP Photo/Charlie Riedel)

Meanwhile, the European Copernicus Atmosphere Monitoring Service (CAMS) model shows the plume of dust veering more eastward, missing most of the Gulf except for parts of Florida.

"The dust will move northwest high in the atmosphere and could make for brilliant sunrises and sunsets in the Caribbean late this week and the weekend," AccuWeather Senior Weather Editor Jesse Ferrell said. "While NASA's dust forecast model shows some dust in the skies over the western Gulf coast from Louisiana to Texas on Sunday, the Copernicus satellite model says the dust will dissipate before it reaches the United States, except for southern Florida."

The particles from the plume mostly hover about a mile above the surface in a layer about 2 to 2.5 miles thick, but the particles can pose a dangerous health risk in the cases when they fall to the ground level. 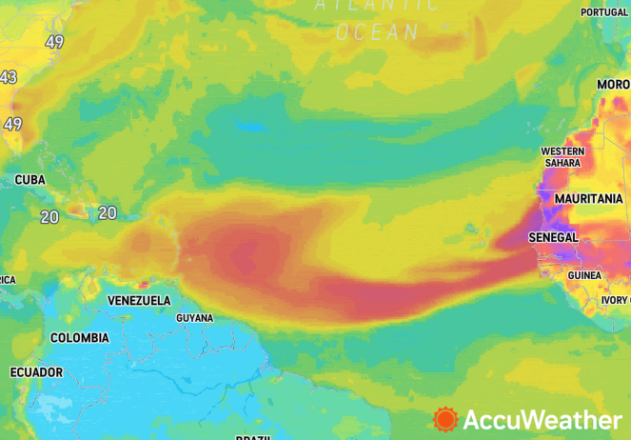 AccuWeather air quality map for May 17, 2022, shows dust (orange/red) over the Atlantic Ocean,

In an interview with AccuWeather, Dr. Meredith McCormack, an Associate Professor of Medicine & Medical Director of Pulmonary Medicine at John Hopkins University and volunteer medical spokesperson for the American Lung Association (ALA), said that the dust particles from the Sahara that reach the U.S. tend to be too big to be breathed in, but that's not the case for all of the particles transferred along in the plume.

Fine particles of silica, along with other minerals, can irritate people's eyes, ears, noses and throats and can even infiltrate lung tissue, aggravate sensitivities and reduce visibility, according to NASA.

"We know that generally, particulate matter has a myriad of health risks, including the risk of increased mortality risk of worsening underlying chronic disease like provoking asthma attacks or COPD exacerbations, or even risks of heart disease," McCormack said, adding that while dust from the Sahara was a bit different than the dust spewed from industrial sources and the focus of most studies, there's evidence that suggests dust from the Sahara has harmful health effects "following the same categories."

Children and individuals with chronic medical conditions, such as heart or lung problems, are typically those who are the most at-risk to harm from dust, McCormack said.

In addition to the health impacts, the SAL can also stifle clouds and thunderstorms, exacerbating the hot summer days. 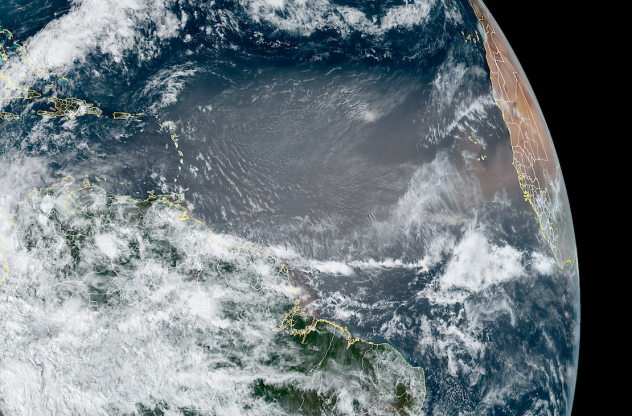 Satellite image of the Saharan dust crossing the Atlantic and heading for the Gulf of Mexico. (NOAA/ CIRA / RAMMB)

"A substantial amount of dust and the dry air that often accompanies it can hinder convective precipitation such as showers and thunderstorms," Sosnowski said. Experts say that significant amounts of dust can also inhibit tropical cyclone formation or the strengthening of an existing system.

The SAL's characteristically dry air is one of the factors that meteorologists believe could weaken tropical cyclones and disturbances. The SAL's air has about 50% less moisture than the typical tropical atmosphere, according to the National Oceanic and Atmospheric Administration.

The strong winds in the SAL can also substantially increase the vertical wind shear in and around the storm environment, potentially disrupting any forming cyclone.

However, while AccuWeather forecasters are currently monitoring for potential tropical development toward the end of the month, Sosnowski said that the easterly winds kicking up could potentially help rather than hinder the formation of a gyre around Central America.