The dust was so intense, Baghdad Airport was shut down and locals are complaining that dust storms are happening "every three or four days now." Meanwhile, satellite imagery showed a huge dust cloud charging across the region.

Thick clouds of dust have plagued the nation of Iraq. Baghdad was hit by its eighth dust storm since mid-April on May 16. At least 2,000 people were hospitalized with respiratory problems.

Another sandstorm blanketed Iraq Monday, turning the skies orange and forcing schools and offices to close, as well as suspending flights at Baghdad Airport. This is the eighth dust storm since mid-April to hit the country, which has been plagued by desertification, record-low rainfall and climate change.

On Monday, satellites captured the massive cloud of sand from above as it raced across Iraq, Iran and Saudi Arabia. As sand blew through Baghdad, the capital of Iraq, buildings turned orange and sand crept into homes.

Schools and universities shut down and postponed end-of-the-year exams to Tuesday. Due to limited visibility, flights were suspended at Baghdad, Najaf and Sulaimaniyah airports Monday. Government offices in seven of Iraq's 28 provinces, including Baghdad, were ordered by authorities to shut down for the day. 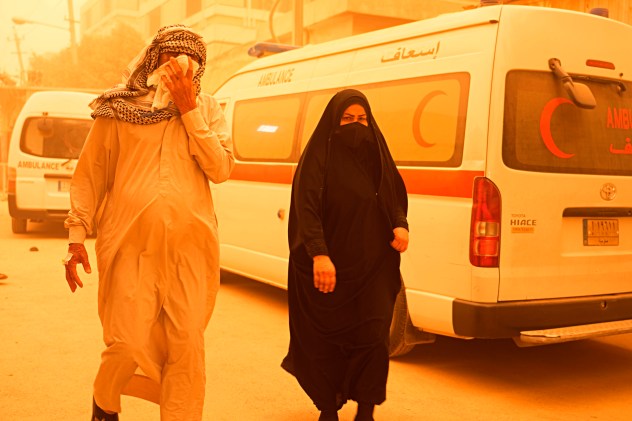 People walk on a street during a sandstorm in Baghdad, Iraq, Monday, May 16, 2022. (AP Photo/Hadi Mizban)

Amid all the closures, health facilities remained open to assist those most at risk. According to a report from AFP, by Monday afternoon, 2,000 people were admitted to hospitals across Iraq in need of oxygen.

Khaled Jassem, a patient in Baghdad's Sheikh Zayed Hospital, was hooked up to an oxygen tank.

"We've been here since 8 a.m.," Jassem's son, Walid Jassem, told AFP. "My father has a heart ailment, diabetes, hypertension and is suffocating on the dust."

Another patient, Hadi Saada, was hooked up to a respirator in the hospital's intensive care unit. His son said it was the third time his father, who has a heart condition, was in the hospital since the sandstorms started in April.

In early May, an intense sandstorm was blamed for at least one fatality and sent at least 5,000 people to hospitals suffering from breathing problems, according to Al Jazeera.

The seemingly constant barrage of dust storms is weighing on some locals. Ahmed Zaman, a 23-year-old taxi driver told Al Jazeera, “It’s every three or four days now," and added that the frequency of the sandstorms is "clearly a result of climate change and lack of rain. Whenever there’s wind, it just kicks up dust and sand.”

In Syria's eastern province of Deir el-Zour, which borders Iraq, two people were killed in Monday's sandstorm, and hundreds of people were hospitalized, according to The Associated Press. 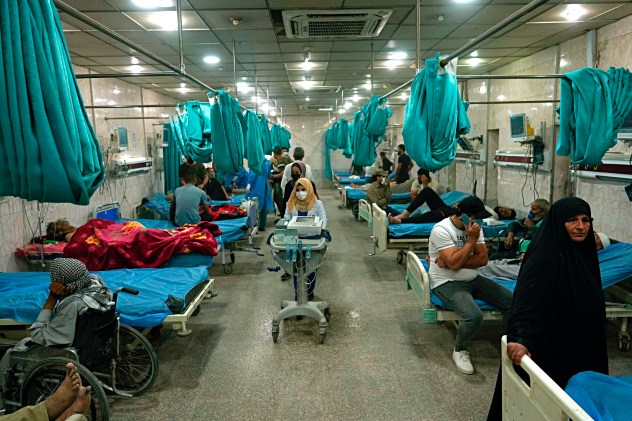 People with breathing problems are treated at a hospital during a sandstorm in Baghdad, Iraq, Monday, May 16, 2022. (AP Photo/Hadi Mizban)

According to critics, the Iraqi government has not done enough to deal with the impacts of desertification, the process in which fertile land turns into desert. Essa Fayadh, a senior Environment Ministry official, told the AP that the nation's water reserves are down 50% from last year.

“For this reason, we could only divert water to irrigate 50% of agricultural lands this year,” Fayadh said.

Iraq is known in Arabic as the land of two rivers -- a reference to the Euphrates and Tigris rivers. The water supply from both rivers has been declining for years and the World Bank has warned that Iraq could potentially suffer a 20% drop in water resources by 2050.

Even though the Middle East is prone to seasonal sandstorms, experts and officials warn the frequency of storms in recent years is alarming.

Ski resort looked like a desert as skies turned red