Aerial footage captured over Nasiriyah, Iraq, shows hazy, orange skies as a dust storm blasted the region on May 5.

A dust storm in Iraq created apocalyptic scenes, dealt a significant blow to air quality and sent thousands of people to local hospitals this week. AccuWeather forecasters say while Iraq has dealt with numerous dust storms this spring, a combination of atmospheric factors led to a particularly potent storm last Thursday.

More than 5,000 people in total across at least six of Iraq’s 18 provinces have been treated at area hospitals for respiratory issues, and at least one person has died this week following an intense dust storm, according to Al Jazeera.

Initial reports indicated that just over 1,200 people were hospitalized on Thursday but that number quickly increased, according to local officials.

Residents who attempted to venture outside in the affected areas on Thursday came face-to-face with a thick, choking cloud of dust surrounding everything in the vicinity.

"The most recent dust storm Thursday morning was caused by a front dropping across Iraq," AccuWeather Meteorologist Tony Zartman explained. "The gusty wind that occurred with the passage of the front kicked up the dust storm, greatly reducing visibilities and causing unhealthy air quality."

According to the Associated Press, Thursday's dust storm was the fifth to occur in the country over the past month.

For many hours early Thursday, visibility at Baghdad International Airport, Iraq's largest international airport, dropped to a mere eighth of a mile, which is only about 660 feet (200 m), or less as blowing dust raged. Visibility even briefly dropped below 330 feet (100 m), about the length of an American football field.

A number of flights were postponed at the airport early Thursday due to the dust, but flights resumed in the afternoon once the conditions improved, the AP reported.

AccuWeather forecasters say it is likely that visibility was near-zero at times for other locations throughout Iraq as well as the worst of the dust darkened the sky.

Thursday's dust storm was only the most recent in a string of storms that have slammed portions of Iraq this spring. Another dust storm covered the region just this past Sunday. During Sunday's storm, both the Baghdad International Airport and the Najaf Airport were forced to close, according to The National.

"Iraq has suffered dry conditions not only recently but over the past several years," Zartman explained. "Therefore, any time a gust of wind comes along, it does not take much to kick off a dust storm."

In April, environment ministry official Issa al-Fayad warned Iraq could face "272 days of dust" per year in the coming decades, according to INA, the Iraqi state news agency.

This projected increase in the overall number of dusty days is due to Iraq and much of the surrounding areas becoming hotter and drier over time due to climate change. A lack of rainfall has led to a lack of moisture in the area soils and sands for Iraq.

When severely dry, soils can be easily lofted into the air by even slightly breezy conditions.

"Unfortunately, these dust storms are likely to become more common and more severe if conditions do not change," Zartman cautioned.

Reduced visibility is not the most dangerous problem these imposing storms create. These dust storms also contribute to a dramatic worsening of air quality for affected areas. 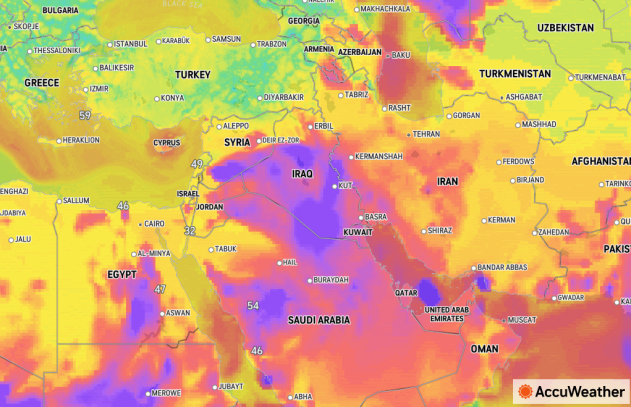 Air quality across large portions of Iraq rose to very unhealthy (denoted by dark pink) and dangerous (denoted by purple) levels on Thursday, May 5, 2022. Air quality has worsened considerably as dust storms impact the area. (AccuWeather)

On Thursday, air quality across much of Iraq was designated as either very unhealthy or even dangerous, according to data provided by PlumeLabs, a company acquired by AccuWeather earlier in 2022.

Particulate matter is typically invisible to the human eye, but it is possible to see in high concentrations, like during dust storms. If any of this particulate matter is inhaled, the effects ramp up in severity based on underlying health conditions.

During days when air quality is considered very unhealthy, health effects will be immediately felt by sensitive groups such as children, the elderly and people with respiratory conditions. Even individuals who do not fall into those categories will experience difficulty breathing and throat irritation when air quality is at a very unhealthy level.

When air quality reaches a dangerous level, any exposure to the air, even for a few minutes, can lead to serious health effects for everyone.

With no considerable rain in sight, AccuWeather forecasters say that dust storms will likely continue to cause problems in Iraq especially as the country moves into its summer, its driest season of the year.