"I thought I would disappear before it," one person said as the lake’s rapid disappearance has caused a sense of loss among those who have watched its demise up close.

Iraq’s Sawa Lake was once a popular destination in the 1990s for newlyweds and families coming to swim and picnic. Today, the lake has run completely dry.

In Iraq, a country regarded as one of the five most vulnerable to climate change, it would take nothing short of a miracle to bring Lake Sawa back to life. Overuse, human activity and climate change have accelerated the desertification process in the area.

On the edge of Iraq's western desert, just south of the capital city of Baghdad, the once two-square-mile Lake Sawa has been drying up since 2014 and has now been reduced to only a small pond. According to a report by AFP, a "no fishing" sign, rusted over boats and old docks still stand, but the water is long gone, making this once popular tourist attraction look completely abandoned.

A significant amount of water was drained from the lake from more than 1,000 illegally dug wells and nearby factories, according to a statement from the Iraqi government. And following years of drought, the area would need several seasons of abundant rainfall to reverse its current state.

But the needed rainfall isn't likely to come anytime soon. Aoun Dhiab, a senior advisor at Iraq's water resources ministry, told AFP there had been a dramatic decline in rainfall in the region. Dhiab noted the sharp drop in precipitation for the region has further lowered the already low underground water table.

In the meantime, authorities have banned the digging of new wells and are working to close all the illegal wells across the country.

➡️After a second consecutive year of severe #drought in the country, the lake has dried up

⬇️The absence of water is visible when comparing #Copernicus #Sentinel2 🇪🇺🛰️images of ↙️ 2017 and ↘️ 2022 pic.twitter.com/Q385CVfE2c

Dhiab, who has worked for the past decade to raise environmental awareness, remembers visiting Lake Sawa on school trips or vacations with his family.

"If the authorities had taken an interest, the lake would have not disappeared at this rate. It is unbelievable," Dhiab said in an interview with AFP. "I am 60 years old, and I grew up with the lake. I thought I would disappear before it, but unfortunately, it has died before me."

Lake Sawa was once a very popular destination for tourists, with an estimated 7,000 tourists visiting every year. Many journeyed to the area with hopes of healing and for religious and spiritual reasons. According to AFP, an underground water table provides the lake with water, which is plentiful in essential elements including sodium, potassium, calcium, magnesium, sulfur, chlorine and carbonates.

Additionally, individuals who suffer from skin diseases have traveled to swim in the lake in the past, in hopes that the water full of elements will help improve their disease.

But with the mineral-rich water quickly disappearing, many hotels, some of which date back to the 1990s, have been abandoned and the biodiversity of the lake has quickly diminished.

Lake Sawa was classified as a national heritage for its large presence in nature, especially in regard to biodiversity. The lake was home to many biodiverse species that were threatened with extinction on a global level and was an ideal stopover for many migratory birds. Now that the lake is nothing more than a small pond, the only species that thrive in the area are tiny fish. 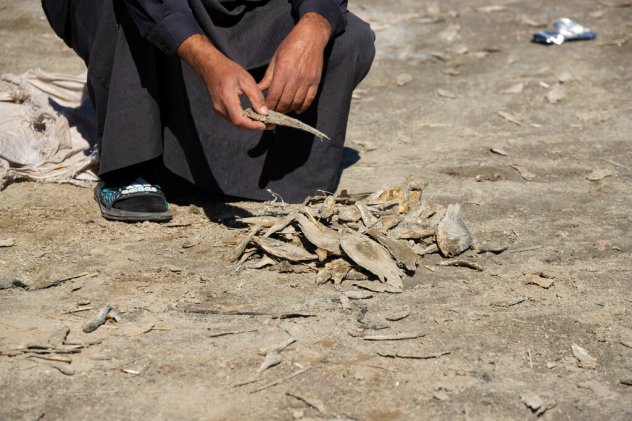 An Iraqi fisherman collects dead fish near Razzaza Lake, also known as Lake Milh, Arabic for salt, in the Karbala governorate of Iraq, Feb. 14, 2022. Hundreds of families used to rely on fishing in the lake for their livelihood. Now the number of dead fish that turns up is bigger than the number of live fish they can catch. (AP Photo/Hadi Mizban)

Lake Sawa is not the only body of water in Iraq facing the perils of drought. Razzaza Lake in central Iraq, the country's second-largest lake, is drying up, and dead fish are turning up along the former banks. Hundreds of families used to rely on fishing from Razzaza Lake for their livelihood, but now the amount of dead fish that turn up is larger than the number of fish they can catch alive.

Rising temperatures and overuse of the area's natural water resources will only further the depletion of Lake Sawa, and soon there may not even be a small pond.

Summer 2021 was Europe's hottest on record