Drone footage shows the damage done to Gaylord, Michigan, after a tornado touched down on Friday, May 20, as well as the spinning storm from the inside of a car.

After intense storms impacted a 2,000 mile swath of the U.S. on Saturday, more severe weather will continue to impact the Northeast to end the weekend. However, AccuWeather forecasters say the round of storms will usher in some relief from the record breaking heat.

Severe storms already have made their presence known in the Midwest and Plains. Most notably, a strong tornado brought major damage to Gaylord, Michigan on Friday, leading to 2 fatalities and over 40 injuries, according to local authorities. Intense thunderstorms also fired up across portions of Texas and Oklahoma at the end of the week, producing hail and gusty winds. Baseball-sized hail was reported in Fort Griffin, Texas, according to the Storm Prediction Center.

A large bulge in the jet stream will create a bottleneck in the atmosphere, allowing a cold front to continue moving quite slowly through Sunday evening. On Saturday, severe weather followed that slow progression eastward into the eastern Great Lakes, Ohio Valley and southern Plains. Severe storms impacted a broad swath of the country, stretching over 2,000 miles from central Texas to northern Maine.

The thunderstorms that fired up Saturday afternoon, and continuing through the overnight will help to bring some relief to areas affected by summertime heat. High temperatures in the middle 80s on Saturday for cities like Indianapolis and Cleveland were a thing of the past Sunday afternoon, as temperatures fell to the middle 50s to low 60s. 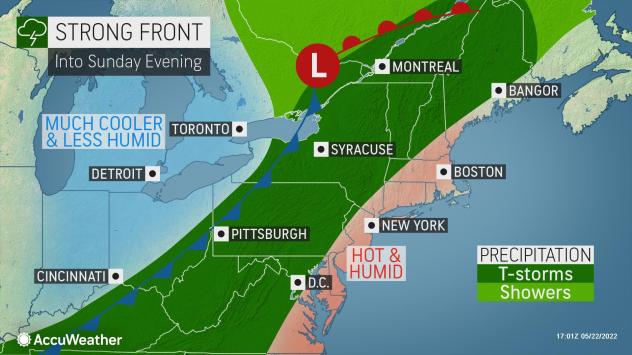 Due to the slow eastward movement of the front, the area at risk for severe weather into Sunday evening will only shift slightly eastward into New England. As such, many areas will need to wait one more day for some relief from the heat, like communities from Bangor, Maine to Philadelphia will have another day of abnormal heat.

Cities such as Scranton, Pennsylvania, Albany, New York and Burlington, Vermont, could all experience severe weather on Sunday following a very steamy day. Much like on Saturday, a range of hazards may be in play due to Sunday's storms. 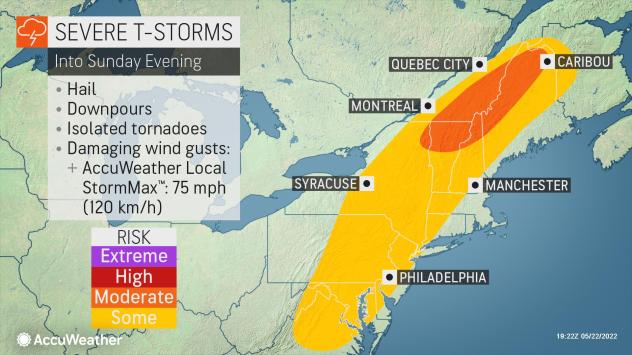 "The main threat in the Northeast into the mid-Atlantic appears to be strong wind gusts and downpours capable of localized flooding. The threat for hail and tornadoes is less likely, but one or two tornadoes can't be ruled out, especially in northern New England," said AccuWeather Meteorologist Adam Sadvary.

A major factor in the development of these potent thunderstorms will be the clash of drastically different air masses on either side: cooler, Canadian air replacing the intense heat that is building over the Northeast throughout the weekend.

"With the unseasonable heat and humidity in place ahead of the front, ingredients will be present for some of these storms to become severe," Sadvary said.

Behind the front sweeping through the area through Sunday evneing will be a new air mass, ushering in a refreshing end to the heat and humidity. Temperatures will be falling back to typical late-spring levels for early week, but the temperature change will be stark. In many areas, Monday's high temperatures may be as much as 30 degrees Fahrenheit lower than those over the weekend.

In Washington, D.C., highs in the low 90s on Sunday will be replaced by Monday's high of 74 F, which is 4 degrees below normal for the date. Farther north, even greater temperature swings may occur. While Boston, Massachusetts, will swelter with a high of 93 F on Sunday, temperatures will drop to the middle 60s on Monday, which is also slightly below average for late May. 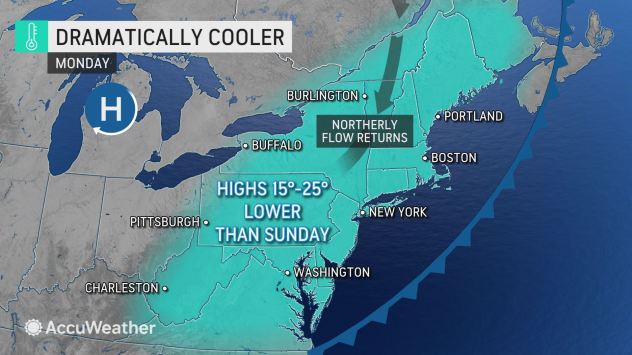 The source of cooler air has already brought impacts to portions of the United States. As AccuWeather Senior Meteorologist Michael LeSeney noted, this dip in the jet stream is responsible for the late-season snowstorm across much of Colorado and Wyoming, and will also spread abnormally chilly air across the Midwest and Great Lakes.

As the dip in the jet stream moves into the Northeast, the change to lower temperatures may be here to stay. Into at least the middle of the upcoming week, high temperatures will be near normal for late May across most of the mid-Atlantic and Northeast.

Army of gastropods seen climbing up walls of woman's home
What's your home's 'wildfire threat score?' New tool lets you find out
Asteroid the size of 350 giraffes to fly past Earth this week