What's your home's 'wildfire threat score?' A new tool lets you find out

The threat of wildfire destroying homes is projected to only get worse and a new tool aims to let homeowners or buyers better understand that threat facing any address in the United States.

First Street Foundation has launched a wildfire risk model, which shows the fire threat that homes and apartments face today and 30 years from now.

For the seventh consecutive year, insured losses from wildfires in 2021 eclipsed $2 billion nationwide, and that total is expected only to increase, according to a new study. Researchers are addressing the rising danger posed by wildfires by introducing a wildfire threat score assessment for virtually every property in the United States.

Wildfires have been a worsening problem for much of the West in recent years, with 1.1 million acres already burned as of May 2022. In 2021, nearly 29,000 wildfires had burned by June 21 in the United States, which was about 4,000 more than average, according to The Guardian. And AccuWeather forecasters expect between 8.1 million acres and 8.3 acres will burn during the 2022 wildfire season.

Insured damages from wildfires totaled $5 billion in 2021, according to CNBC. Since 1980, when wildfire tracking by the National Oceanic and Atmospheric Administration (NOAA) first started, about 66% of all fire damage has occurred in the last five years, CNBC reported.

Homes continue to be at risk for wildfire damage across the nation, and as the threat continues to increase, the need for more readiness is becoming ever more important.

The nonprofit First Street Foundation, based in Brooklyn, New York, is addressing that by using new technology to map the fire threat all the way down to house-by-house levels. Several pieces of information were used in order to create the map, including property tax data, satellite imagery, construction type and even weather. 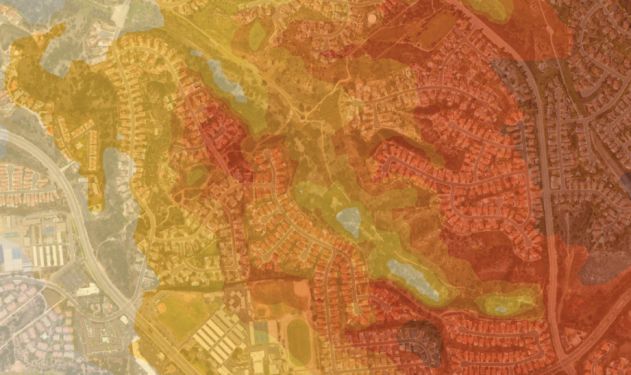 First Street Foundation focuses on quantifying and communicating climate risk at an individual level. The organization was founded six years ago, and one of its first initiatives was to model flood risks on a granular level, right down to a home's address.

"We found about 80 world experts in hydrology and climatology and built the nation's first property specific and climate adjusted flood model, and with that success, we were able to then parlay that into a wildfire model," First Street Foundation founder and executive director Matthew Eby told AccuWeather National Reporter Bill Wadell.

Next, First Street Foundation sought to apply that concept to wildfire risk.

The foundation created a team of more than 50 experts who specialized in wildfires, fuels, climatology and fire weather. After assembling the team, the organization was able to process the information using supercomputers and other data sources in order to create the property-specific model, which shows the likelihood of wildfires reaching a certain structure today and over the next 30 years.

"Americans have been left in the dark when they're trying to buy, sell or rent somewhere to live with the idea of how wildfires may impact them today," said Eby. 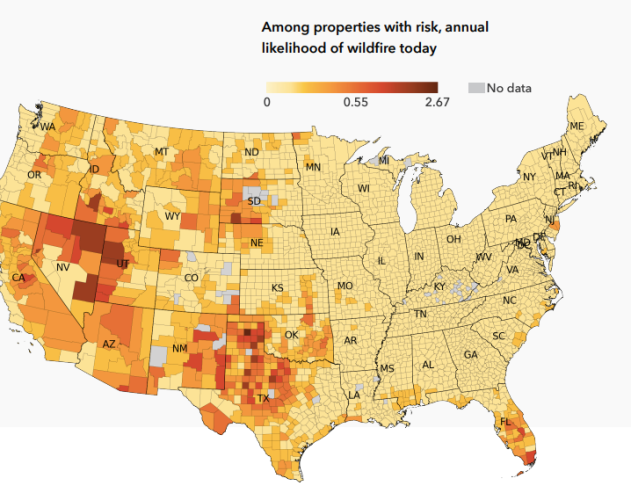 The fire scores will be visible similar to how flood scores are shown on Realtor.com for every property. Those looking at listings can navigate to the website Riskfactor.com, type in any address and see a flood and fire score for that property. The assessment shows both current risk as well as future risk.

The fire factor scale begins at 1, designating no modeled exposure of being in a wildfire. The scale peaks at 10, which designated a greater than 36% chance that a property is at risk of burning over a 30-year period. These scores are assigned to all properties in the continental United States.

Some homes could be more vulnerable than others in the same area due to differences in building materials. First Street Foundation says its models are able to account for this in addition to the current fire risk and projected fire risk from climate change.

Eby said more than 30 million homes have at least a 1% chance of being in a wildfire over the next 30 years, and while that number may seem small to some, he said it isn't meant to be compared to other disasters.

"You have to think of it in the sense of it's not flooding where a little bit of water in your home causes some damage, but you can fix it. There's not really such thing as a little bit of wildfire in your house ... but the consequences are so severe that we really need to think about it in a different way," Eby explained to AccuWeather. 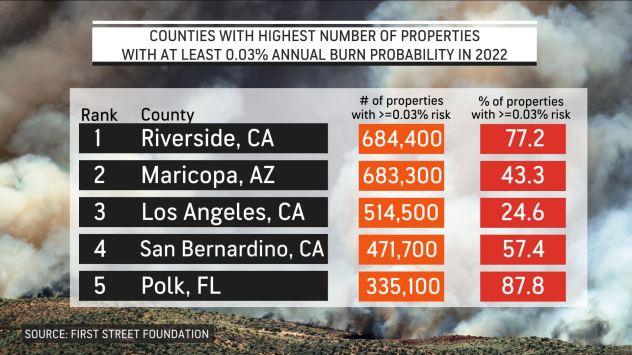 Counties with the highest number of properties with at least 0.03% annual burn probability in 2022 (First Street Foundation)

Three counties in the United States have more than 500,000 properties with at least 0.03% risk of fire damage this year. The 684,400 properties at risk in Riverside County, California, just east of Los Angeles, account for more than 77% of all properties in the county.

The burn probability in 2022 when compared to 2052 projections shows a startling trend that includes many counties outside the Southwest with significant fire risk. Greer County in Oklahoma is projected to have 56% of all properties fall under the 0.03% risk threshold in the next 30 years. In total, five counties are projected to have more than 50% of properties exceed the threshold in the next three decades. 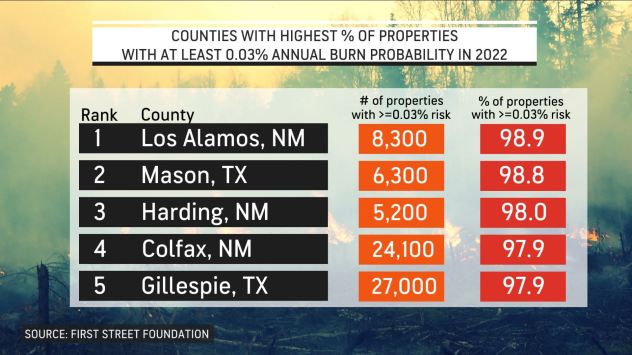 Counties with highest percentage of properties with at least 0.03% annual burn probability in 2022 (First Street Foundation)

The 30-year projection map shows several counties across the country that will have a 200% or higher fire risk, including counties in states along the East Coast such as Maine, New York, New Jersey and even Florida.

As Eby explained, Florida historically has hundreds of wildfires, and the sheer amount of properties with at least an extreme level of risk in the state is on par with Texas and California.

"[Florida] is actually the state that has the most properties with a 1% annual risk or greater this year," said Eby.

Earlier in May, Senior Meteorologist Paul Pastelok, AccuWeather's head long-range forecaster, and his team looked at historical weather patterns, statistics and a host of other factors to forecast the 2022 fire season.

The team predicts an above-normal wildfire season in 2022 that could burn up to 8.3 million acres, partly due to extreme drought conditions in the West and lackluster spring precipitation setting the stage for a parched summer. 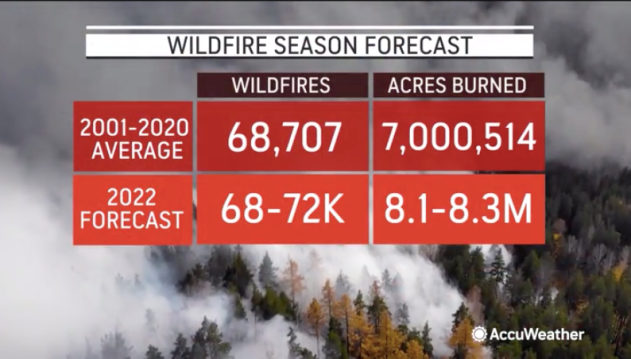 Weather and climate are both big factors when determining wildfire risk in both the short and long term.

"When we're talking about wildfire risk, wildfire weather is one of the biggest components of that. So that's humidity and heat and wind. So those three things together are really the things that will allow a wildfire to grow and get bigger and bigger or make it into communities and impact homes," said Eby.

The foundation looked at 10 years of weather data, including wildfire trends during El Niño and La Niña. The team also looked at the different characteristics from the data to develop the burn threat for properties in 2022. The team then adjusted the data 30 years in the future to account for climate change.

"We adjusted the heat and humidity which relate to things like drought and the drying of fuels, but we kept the wind constant. So to make sure that we weren't overpredicting, we took a very conservative view on how the weather would change," Eby explained to Wadell.

A study conducted by Realtor.com found more than 71% of homebuyers considered natural disasters when looking for a new home. More than 10 million properties are located in an area between "major" and "extreme" wildfire risk. 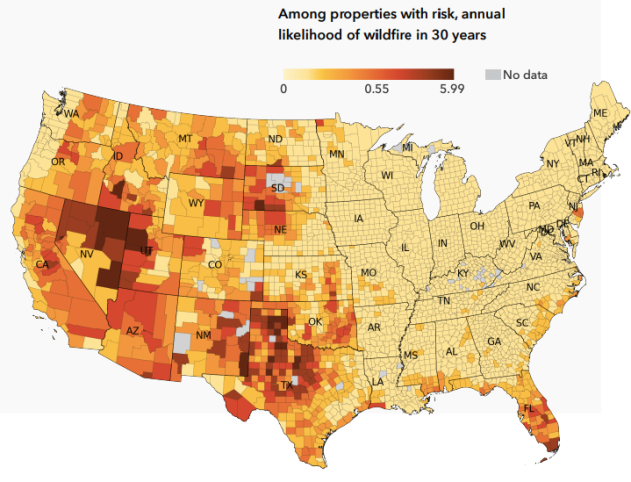 Properties at risk of wildfires in 30 years. (First Street Foundation)

Eby hopes people will be able to use the information made available to help keep them informed and make decisions to protect their homes from wildfires. He explained to Wadell that, unlike flooding, protecting property from wildfires can be easier.

One of the ways to help protect property from wildfires is considering the defensible space, according to Eby.

"That's 50 feet perimeter around your home. Do you have trees and shrubs...or other combustible items that are near your home? Because that is what's going to increase your risk exponentially," Eby explained.

As the wildfire danger continues to increase across the country, Eby said it is important to find solutions to help ease the spread.

"Climate is just exacerbating the situation," Eby said, "and it's really something that we need to think about how we can actually implement solutions, be it adaptation or mitigation to really try and get a handle on this."