Footage shows the outside of the home teeming with the little creatures as recent weather turned the yard into a gastropod paradise. These pests are mostly an annoyance but can carry a fungus and cause illness in humans.

During heavy rain, a woman noticed hundred of snails had crawled into her yard in Hanoi, Vietnam.

Unwanted, slimy, slithering guests, numbering in the thousands, slipped into the garden of a Vietnamese family and got a little too close for comfort.

Recent heavy downpours in the Hanoi area apparently flushed out the horde of mollusks from their little hiding places. A woman captured the tiny creatures on video last week as they -- ever so slowly -- made their way into her yard, sliding along the pavement of a patio or driveway. The snails were even seen clinging to the brick side of her house.

The unidentified woman said she opened the door and, to her amazement, her yard was inundated with the snails. They had taken over her garden before moving on, er crawling, toward her shed. Scared, she attempted to drive them away, but they kept coming back, bringing more of them to boot. 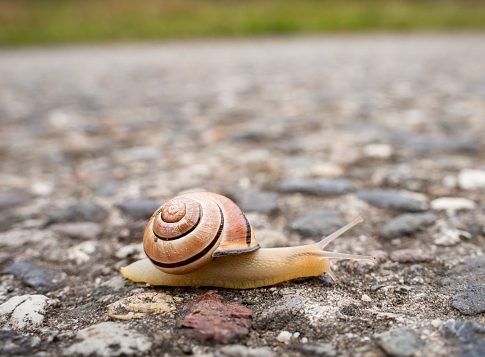 But luckily once the sun came out, most of them went back into hiding.

Known for their distinctive spiral shell, these single-lung air-breathing gastropods thrive in damp and humid environments. They can be seen out and about hours after a drenching rainfall, partly for their survival and partly because they find it easier to move along on wet surfaces, according to experts.

They are especially known to congregate in muddy areas like the ponds and flooded rice fields of Vietnam.

Temperatures in Hanoi reached a high of 91 degrees Fahrenheit on the day the snails were filmed, according to AccuWeather.

These hardly noticeable creatures can be major garden pests. They can carry a fungus that causes root and stem rot in plants and a parasite that can cause illness in humans.

Yet these little antennaed gastropods are a rather sought-after gastronomic delicacy in the Vietnamese culinary scene: In fact, they are among the country’s favorite “street food.”