NASA is calling it a 'potentially hazardous asteroid,' and it will fly harmlessly past Earth in the coming days. Skywatchers will be able to catch a glimpse of the mile-wide rock --provided they know where to look in the sky.

Asteroid 7335 (1989 JA) is expected to fly past Earth in its closest approach since its discovery on May 1, 1989. This large asteroid is bigger than the tallest building in the world!

A massive asteroid over a mile wide is about to make a closer-than-normal trip past the Earth near the end of May, an approach so close that it could be spotted in the sky.

Asteroids fly past the Earth on a regular basis, but Asteroid 7335 (1989 JA) is bigger than many of them, measuring 1.1 miles (5,900 feet) across. For comparison, it is four times larger than the Empire State Building and more than twice as large as the Burj Khalifa, located in Dubai, UAE, and the tallest building on the planet. It is also about as tall as 350 giraffes.

On May 27, the mammoth asteroid will make its closest encounter with our planet since its discovery, but rest assured, it will safely pass by with no threat of impact. 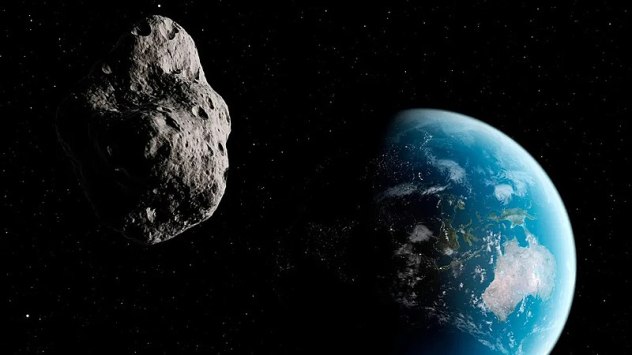 An artist's rendition of an asteroid flying past the Earth. (Sebastian Kaulitzki/Science Photo Library/Corbis)

To be considered potentially hazardous, an asteroid has to be at least 460 feet across and come within 4.6 million miles of Earth's orbit around the sun. This may sound close on a cosmic scale, but this distance is more than 19 times farther away than the moon is from the Earth.

This flyby will be a good opportunity for scientists to take better observations of the asteroid, as well as a chance for amateur stargazers to spot it in the sky. 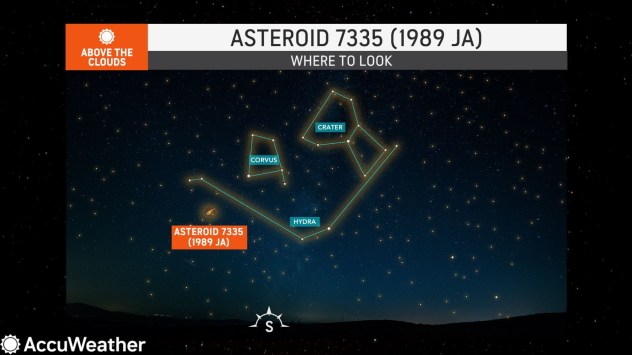 Stargazers hoping to catch a glimpse of the asteroid can find it in the southern sky near the constellation Hydra. However, a telescope will be needed to see the massive rock as it will not be bright enough to see with the naked eye.

Some skywatchers have already found Asteroid 7335, and it will gradually become easier and easier to see in the nights leading up to May 27.

What would happen if it did hit the Earth?

Earth has been hit by boulder-sized space rocks in recent history, but none nearly as large as Asteroid 7335.

The Chelyabinsk meteor was a well-documented meteor that exploded over Russia on Feb. 15, 2013, as it burned up in Earth's atmosphere. The explosion had a force 20 to 30 times greater than the Hiroshima atomic bomb -- and it was only 65 feet across, according to EarthSky.

An asteroid up to 200 feet across exploded over Siberia on June 30, 1908, with an even more devastating force. The explosion flattened roughly 1,300 square miles of forest in the remote area of Russia, according to CBC News.

This has been come to be known as the Tunguska event. 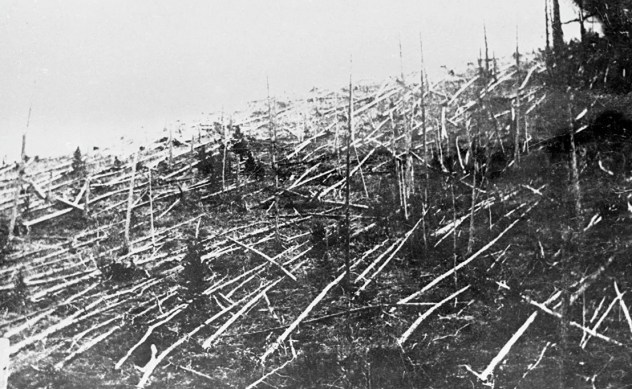 This photo, taken in 1927, shows a forest that was leveled during the 1908 Tunguska event. (Soviet Academy of Science)

The ramifications of a mile-wide asteroid hitting the planet would depend greatly on where exactly it entered Earth's atmosphere. However, it may not be as bad as the asteroid often associated with the extinction of the dinosaurs, which was estimated to be about 6 miles across.

Odds favor such an asteroid exploding over the ocean since most of the planet is covered by water. This is the best-case scenario for life on Earth, although it could still have global impacts.

The heat generated by the event would cause a substantial amount of ocean water to evaporate, leading to major shifts in the weather.

Contrary to some science fiction movies, an asteroid hitting the ocean would "probably not" cause a massive tsunami, according to SPACE.com.

A much different story would unfold if a mile-wide asteroid exploded over land, potentially causing a global calamity with long-lasting impacts. The fallout would be compounded if the event happened near a densely populated area.

However, there is no immediate threat of such an asteroid hitting the Earth as NASA is constantly on the lookout for more potentially hazardous asteroids. Even if a large asteroid was on a collision course with Earth, NASA is currently working on a mission that could redirect an asteroid away from our planet.

Correction: A previous version of this article stated that the Burj Khalifa was located in Saudi Arabia. The skyscraper is located in Dubai, UAE.