Watkins, who made history the moment she stepped onto the International Space Station last month, spoke to AccuWeather about the rigors of living in space and what research she and her crew members are conducting.

AccuWeather's Adam Del Rosso spoke with NASA astronaut Jessica Watkins as she becomes a member of the Crew 4 astronauts aboard the International Space Station.

NASA astronaut Jessica Watkins made history last month when she became one of the latest astronauts to come aboard the International Space Station.

Late last year, NASA announced Watkins would be assigned to the SpaceX Crew-4 mission to space, making her the first Black woman to live and work on the ISS. Watkins was first selected as an astronaut by NASA in 2017.

On a recent edition of AccuWeather Prime, Watkins told AccuWeather's Adam Del Rosso that she was honored to be part of the "long legacy of Black astronauts who have come before me."

"I think that it is an important tribute" to that legacy "as well as a testament to the exciting future ahead...I'm just honored to be a small part of that legacy," Watkins told Del Rosso.

Watkins grew up in Lafayette, Colorado, located about 22 miles north of Denver, and developed a passion for space at a young age. She told Del Rosso that her interest in being an astronaut began sometime around the age of nine or 10.

"This has been a dream of mine for a pretty long time...I never really thought that it would truly happen. So, just so lucky and blessed and honored to be here today," Watkins told Del Rosso. 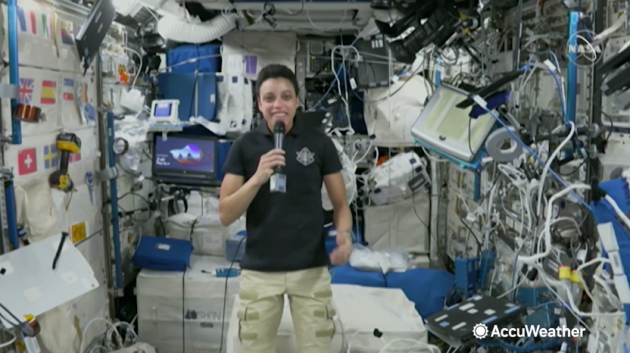 In college, Watkins studied geological and environmental sciences at Stanford University and earned a bachelor's degree in that study. She then earned a doctorate in geology from the University of California, Los Angeles, according to NASA.

At UCLA, her graduate research project consisted of researching the emplacement mechanisms of large landslides on Mars and Earth. Watkins' first experience with NASA occurred when she became an intern working at the Ames Research Center in California in addition to NASA's Jet Propulsion Laboratory.

While training to become an astronaut, the crew of SpaceX Crew-4 had to endure frequent training to be ready to perform tasks while in space.

But it wasn't just physical training that the team had to learn.

"Lots of our other training involves systems and equipment as well. So we learn about the systems of the International Space Station, where we are now, as well as the outside of the space station. So doing extra vehicular activity training or spacewalk training in addition to our training on the SpaceX Dragon Vehicle," said Watkins.

The SpaceX Dragon Vehicle was the vehicle that brought Crew-4 to the ISS, and it will also be responsible for bringing the crew back to Earth after the mission is complete. Watkins, along with mission Commanders Robert Hines and European Space Agency astronaut Samantha Cristoforetti, launched to the ISS on April 27 from the Kennedy Space Center in Cape Canaveral, Florida. 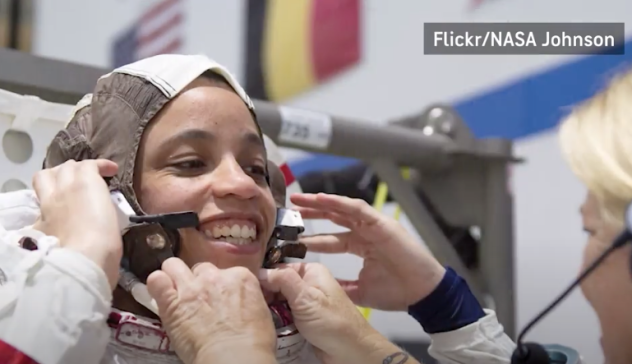 Dr. Jessica Watkins trying on her equipment before going into space. (Flickr/NASA Johnson)

The six-month mission involves conducting research on materials science, health technologies and plant science that will prepare for human exploration beyond low-Earth orbit, according to NASA. More than 200 science experiments and technology demonstrations will take place over the course of the mission.

As a geologist, Watkins told Del Rosso, she is very excited to be part of this crew.

"Being able to see the Earth from the perspective that the ISS offers, it's just really unique and really, really a very cool opportunity for a geologist like me. I really enjoyed being able to look out at the features and processes that we can see on Earth and, in particular, being able to apply those to planetary processes and features," said Watkins.

While inside the ISS, Watkins said the crew is able to use Earth as an analog for what is seen on other planets, which helps the team learn more about those other worlds. The information can also be used to learn more about Earth. 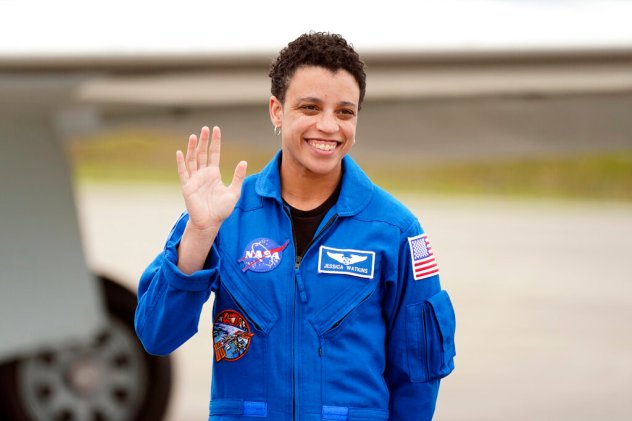 In addition to its research goals, the crew also has to maintain physical health throughout the mission while aboard the ISS. The crew members use exercise equipment every day to help maintain their health and bone mass.

"The effects on microgravity on the human body can be significant. So we have these countermeasures in place," said Watkins.