Torrential rain in Chicago Sunday caused hundreds of basements to flood, forced numerous motorists to abandon their vehicles, and turned Solider Field into a swamp. The heavy rain was still wreaking havoc across the Midwest on Monday, including around Milwaukee.

A rainstorm that impacted the Chicago area throughout the day on Sunday, Sept. 11, caused water pipes to burst and cars to stall on streets throughout the city.

A flash flood warning was issued until 12:30 p.m. local time for most of Cook County on Sunday. Local law enforcement first reported flash flooding across portions of north Chicago just before 10:30 a.m. Additional flooding was reported on roads about an hour later, according to the National Weather Service.

Hundreds of residents reported their basements had flooded with some even reporting as much as 6 inches of water, according to Block Club Chicago. At least 2 feet of water had accumulated under a Metra line in Chicago, causing cars to stall.

Ravenswood Manor, located just east of the Interstate 90 and Interstate 94 junction, reported 4.32 inches of rain in just three hours late Sunday morning. Several other areas around the city reported more than 2.5 inches of rain such as West Ridge, Harwood Heights and Portage Park.

According to NBC Chicago, the flooding in the Windy City was the most substantial in two years. John Carruthers, a Ravenswood resident, told the news station that he had to vacuum about 1 inch of water from his basement on Sunday.  “Thankfully I got it done before the end of the Bears game,” Carruthers said to NBC Chicago.

A large water burst was seen near Anthem Church Chicago on Sunday morning, with video posted on social media showing the water spraying higher than a building as cars drove past it on the flooding street. Another water burst was spotted shooting several feet into the air in uptown Chicago near Heritage Outpost Coffee Shop.

Water could be seen flooding into buildings in several locations across the city such as at Kenmore and Thorndale. Several Chicagoans posted photos of their streets and homes flooded onto the Chicago subreddit, including a basement in Lincoln Square and flash flooding in Rogers Park. 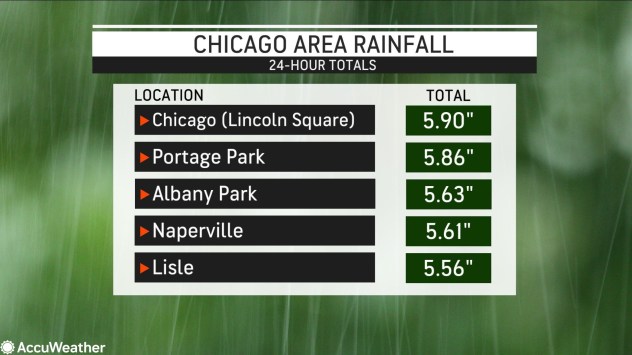 A look at some of the highest rainfall totals around the Chicago area from Sunday into Monday.

The storm pushed into the Midwest late on Saturday, bringing with it the first gasp of rain for many. An area of heavier rain and thunderstorms developed across parts of Wisconsin and Illinois by Sunday morning, drenching cities from Madison and Milwaukee to Rockford and Bloomington.

Right before a Chicago Bears game kicked off at Soldier Field, stadium workers could be seen using squeegees to try and get an excess of water off the field. Rain fell on and off throughout the game before peaking in intensity towards the end of the fourth quarter when a large amount of water could be seen pooling on the field.

As the game clock wound down, several members of the Bears’ offense joyfully ran and used the soaked turf as their own slip and slide as thousands of die-hard and soaked fans celebrated the team’s victory. The Bears defeated the San Francisco 49ers 19-10.

Video from the stands around Soldier Field showed fans exiting in a full-fledged deluge. Spectators could be seen completely drenched despite wearing ponchos and rain jackets as the rain transformed the concourse into a tiny river.

"Oh my God, look at the water!" one fan could be heard exclaiming.

The storm initially pushed into the Midwest late Saturday, bringing heavy rain and thunderstorms across Wisconsin and Illinois. By Sunday morning, cities across the Midwest from Madison and Milwaukee to Chicago and Bloomington were drenched.

More than 450 flights were delayed and more than a dozen were canceled from Chicago O'Hare International Airport as of Sunday afternoon. More heavy rain is expected to continue through Monday night as the storm stalls over the area through early week.

The National Weather Service and Chicago Office of Emergency Management and Communications advised residents to use caution and avoid driving through standing water on streets, viaducts & low-lying areas. 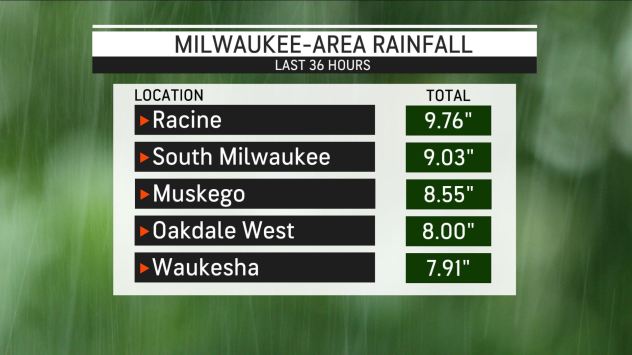 Rainfall totals varied sharply across the area, but were generally highest in the western and northern Chicago suburbs, as well as much of southern Wisconsin. In these areas, reports of over 5 inches of rain were not uncommon. Much of the rain fell in just two or three hours. In the Milwaukee suburbs, over 8 inches of rain fell in some spots.

On Monday morning, flooding continued to cause problems around the region, including on Interstate 94 in Pewaukee, located west of Milwaukee, where cars could be seen driving through heavy water.

According to PowerOutage.US, about 7,000 customers were without power due to flooding on Monday in southeast Wisconsin. By Tuesday morning, fewer than 1,000 outages remained.