Flooding risk rises as rain crawls from Midwest to Northeast

Several days of rain and thunderstorms may be welcome for some, but AccuWeather meteorologists warn that both recently wet and dry areas should be on alert for the risk of flooding early week.

A slow-moving storm is expected to crawl across the northern tier of the United States through Tuesday, hitting an area where rain has been feast or famine over the last several weeks.

From the Midwest to New England, there are lingering pockets of drought conditions. Abnormally dry conditions have been observed across parts of eastern Illinois and Indiana, as well as Pennsylvania and New York. Portions of central Michigan and southern New England are in moderate or severe drought, according to the U.S. Drought Monitor.

Persistently dry locations may be most susceptible to flash flooding, as the parched ground may not be able to absorb the rainwater following a heavy downpour.

Other areas have been deluged with rain, including cities like Cincinnati, Ohio and Providence, Rhode Island. Both locations reported over 3 inches of rain in the first week of September, nearing the normal amount of rain for the entire month and making the ground more sensitive to any additional rain.

The storm pushed into the Midwest late on Saturday, bringing with it the first gasp of rain for many. An area of heavier rain and thunderstorms developed across parts of Wisconsin and Illinois, by Sunday morning, drenching cities from Madison and Milwaukee to Rockford and Bloomington.

The rain started in Madison, Wisconsin, around 8 p.m. CDT on Saturday; 12 hours later, 0.82 of an inch was reported, about a quarter of the normal amount of rain that falls during the whole month. In total for Sunday, a whopping 2.18 inches of rain was observed in Wisconsin's state capital. 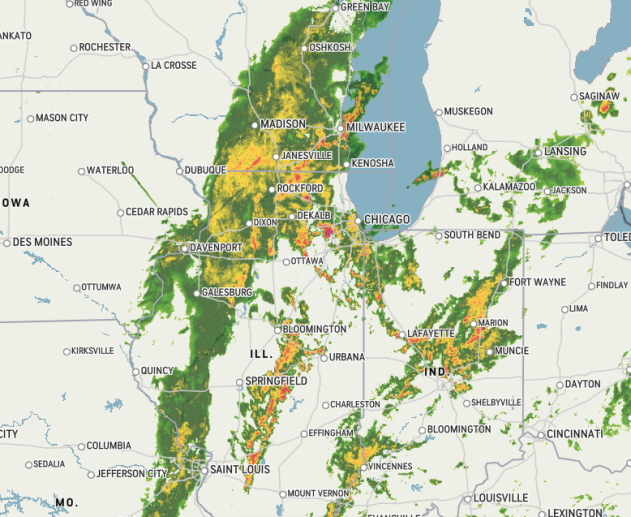 AccuWeather radar shows heavy rain and thunderstorms across portions of Wisconsin, Illinois and Indiana, on the morning of Sunday, Sept. 11.

Chicago was impacted by flooding as the storm brought heavy rain to the city throughout the day on Sunday.

Rounds of heavy rain are likely to continue through Monday night as the storm stalls over the area through early week. This will allow the same areas to be hit with heavy rain repeatedly. 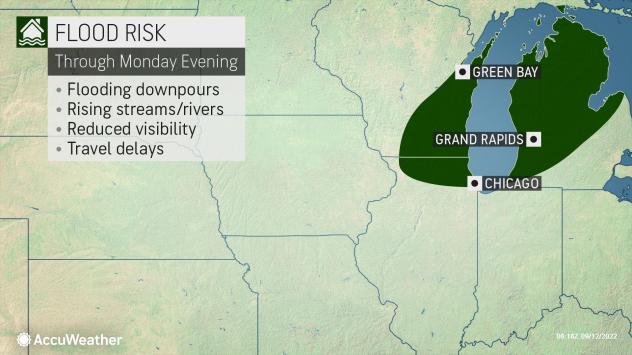 The rain will bring a rise to creeks and streams across the region. Motorists along parts of Interstates 80, 90 and 94 can expect reduced visibility in heavier downpours, leading to slowed travel. On secondary roads, ponding is also expected, especially in low-lying areas.

Before the wet weather moves out Monday night, widespread rainfall amounts of 1-2 inches are expected across the area. The concentration of heaviest rain is likely in southeastern Wisconsin and nearby portions of Illinois, where rainfall may total as much as half a foot.

Despite the risk of flooding, for some areas, this rain will be welcome. 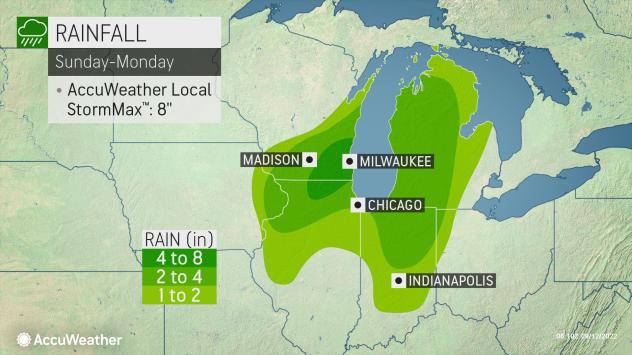 Indianapolis had been falling behind on rainfall for September, recording only 0.30 of an inch as of Saturday. That changed in a big way on Sunday though, as the city received 0.72 of an inch of rain.

As of Saturday, cities like Traverse City, Michigan and Chicago had no measurable rainfall during the month.

"In the long term, the wet weather is likely to help areas that have recently been abnormally dry and stave off any worsening drought," explained LoBiondo.

Behind the wet weather, dry conditions are expected across the Great Lakes and the Midwest. The lower-than-normal temperatures across much of the area through the rain will linger into Tuesday before starting to rise back to near normal late week.

After a couple of dry days from the mid-Atlantic to New England, a soaking rain is forecast to return.

"Portions of New York, Pennsylvania and Maryland, all reported steady rain on Sunday morning, with widespread rainfall amounts of a quarter of an inch. These areas could have rounds of rain through Monday night before wet weather starts to wane early Tuesday," LoBiondo said.

Rain is expected to persist across portions of upstate New York and New England even on Tuesday.

A surge of tropical moisture from the Gulf of Mexico and the Atlantic is likely to bring heavier-than-normal downpours to the region. As such, rainfall totals through Tuesday of half an inch to 1 inch are likely to be common. 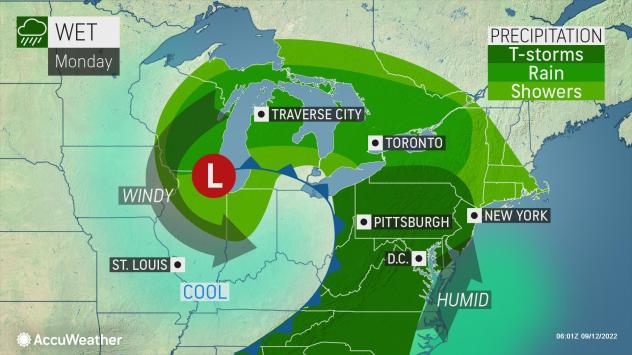 Some localized areas could receive as much as 2 inches of rain, especially should any area get more than one heavy thunderstorm.

In addition to the heavy rain, the pattern may be one that allows for some severe weather on Monday, particularly in the Mid-Atlantic.

"With warm and humid air in place in the Mid-Atlantic states, as well as an increasingly strong jet stream due to the approaching storm system, at least isolated severe storms appear to be in the cards," AccuWeather Meteorologist Andrew Johnson-Levine explained.

Storms are likely to fire during the afternoon hours, moving eastward by evening. For cities such as Washington, D.C. and Philadelphia, the timing of these storms may prove disruptive to already congested evening commutes. 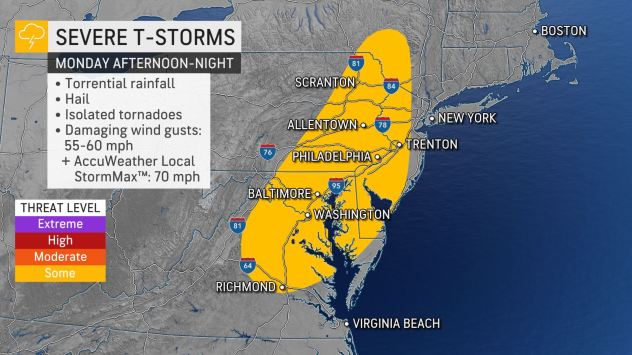 Damaging winds will be the primary hazard from any severe storms, though forecasters note that hail and even a few tornadoes also cannot be ruled out.

"The highest tornado threat should line up with where the strongest winds above the surface are found. For Monday, this will likely be in the northern half of the threat area, from the D.C. metro area northward," Johnson-Levine explained.

Such a pattern will bring repeated chances of thunderstorms to some locations that have been recently deluged with rain.

In the first week of September, Pittsburgh reported 2.64 inches of rain, almost 300% of normal during that time and just shy of the average amount of rain for the entire month. Downtown Baltimore recorded 2.35 inches of rain in just two days, putting the city on a fast track to a wetter-than-normal September. Scranton, Pennsylvania, reported 4.5 inches of rain in just four days, surpassing the month's normal rainfall. Such locations could be more susceptible to flooding.

"If the same areas that were hit with heavy rain earlier in the month get another heavy downpour or two, there could be a greater risk for flooding," LoBiondo warned. 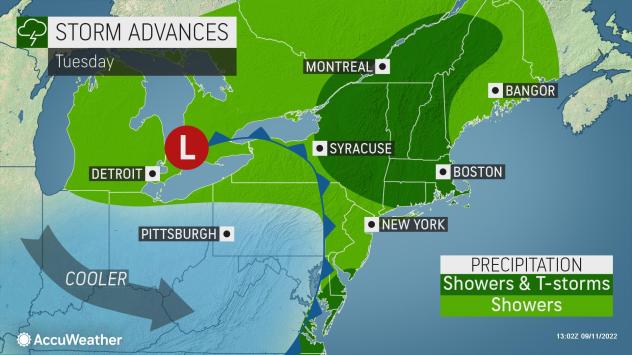 While the showery conditions are likely to bring along temperatures that are more reminiscent of early fall, a noticeable push of cool air behind the wet weather is also expected.

Temperatures are expected to struggle to reach the upper 60s on Tuesday in cities like Buffalo, New York and Pittsburgh, keeping temperatures 10 degrees Fahrenheit below normal. The cool air will wait until Wednesday, or even Thursday, to reach New England, when cities like Albany, New York, Hartford, Connecticut and Boston could all have temperatures stalled in the 60s.

Farther south, in places like New York City, Philadelphia and Washington, D.C., temperatures are forecast to return to normal mid-September levels in the middle 70s to the lower 80s for the second half of the week.