This might be pretty tame compared to what else goes on at the annual desert festival, and the man who shot this footage said he did the same thing -- and described what it was like.

A large dust devil swept through the desert of Black Rock City, Nevada, on Sept. 2, coming dangerously close to RV camps at the annual Burning Man festival. Footage recorded by Robert June shows a fellow attendee walking toward the cyclone, and June said he also walked through the storm, not expecting the wind and dust to be very strong.

“I could barely stand and couldn’t even see my feet,” June told Storyful. “Getting hit in the face with dust at high speeds is not fun.” 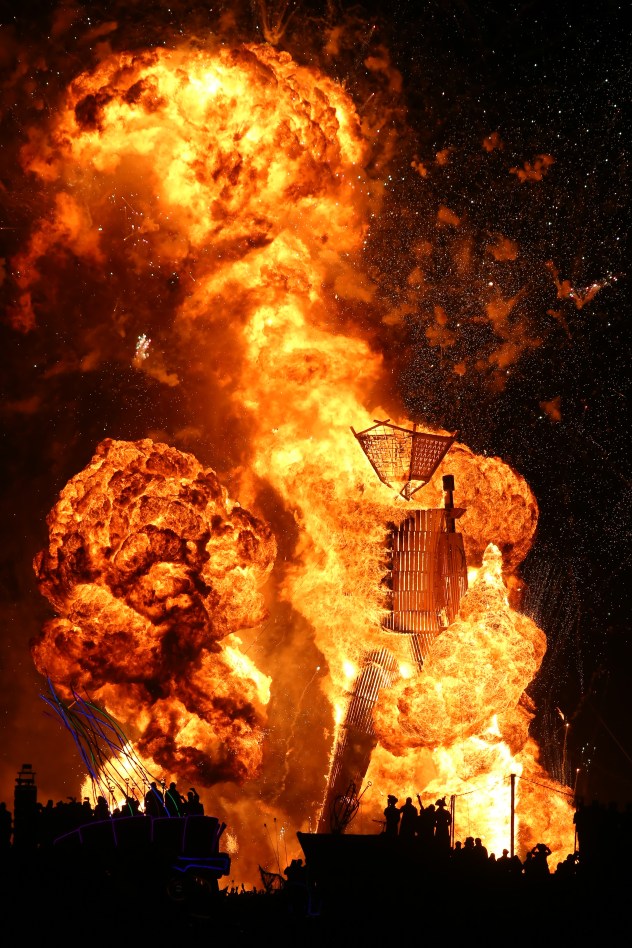 This 2014 photo shows the hallmark of the Burning Man festival: A gigantic wooden person lit ablaze and viewed by tens of thousands of people. (torroid via Flickr)

Dust devils were a common occurrence at this year's festival, where artists and community organizers gather every year to show off their crafts. The 2022 edition of the festival marked its return after it was derailed by the coronavirus pandemic the past two years.

In the days after June's video was published, the Burning Man organizers warned of dust clouds so thick that cars were getting lost in "whiteout conditions" right before the main event, where an effigy made of wood is burned at the center of the complex.

After a very windy, dust blown afternoon, "The Man" finally burns shortly before 10PM PDT this evening in the Black Rock desert northeast of Gerlach, NV, as seen from GOES West stationed 22,236 miles above the Earth's equator. #CAwx #nvwx pic.twitter.com/OU8tbw9w5g

As "The Man" burned that evening, the National Weather Service station in Reno, Nevada, tweeted a map of massive dust clouds stretching across the desert and over the festival area.

The Burning Man festival is no stranger to extreme weather, and organizers encourage attendees to bring goggles or face coverings to help deal with blowing sand and dust. The foot traffic of the festival's 80,000 attendees is also known to kick up dust and debris, and the crowd’s departure -- or what festival goers call the "exodus" -- contributed to dusty conditions amid temperatures soaring into the triple digits. 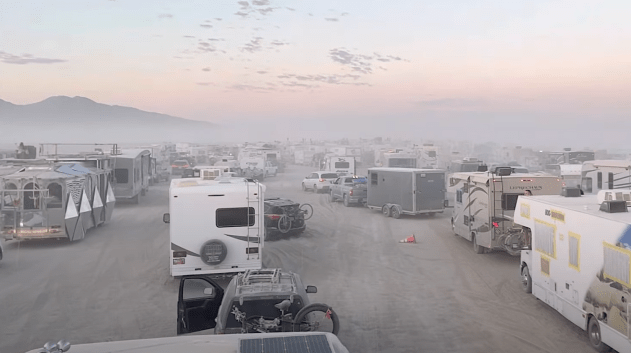 The traffic jam caused by festival goers leaving Burning Man 2022 was up to nine hours.

On top of the dust and scorching temperatures, the "exodus" wait time was estimated to be nine hours to leave the grounds, which are located about 100 miles north of Reno, the festival warned on Twitter.

One festival attendee, who goes by the name Quentin Coyote, captured images showing an epic and very dusty traffic jam as people tried to make their way out of Burning Man at sunrise, according to accounts that were verified by Storyful.

'Many heroic acts' as blaze ripped through historic Black neighborhood