Much of the southwestern United States are experiencing a significant temperature swing in the coming days with heat that is setting record highs in some areas, AccuWeather meteorologists say.

"The orientation of the jet stream is playing a large role in building record-setting heat in the Southwest. From Texas to Southern California, temperatures will be 10 to 20 degrees Fahrenheit above normal," AccuWeather Meteorologist Alyssa Smithmyer explained.

The combination of a large storm and dip in the jet stream helped to keep temperatures suppressed in much of the Southwest last week. The storm was responsible for deadly thunderstorms in the North Central states on Thursday. As both systems continue to move well away, the jet stream will bulge northward and a 'heat dome' will build across the Southwest, resulting in multiple days of scorching heat. 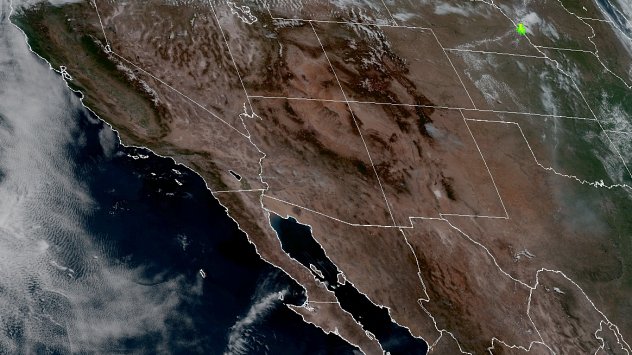 This image was taken prior to sunrise Saturday afternoon, May 14, 2022, and shows a virtually cloudless sky over the southwestern United States. (GOES-17/NOAA)

The first signs of a pattern change arrived in the area on Saturday, with temperatures rebounding to above average across the Southwest. During the middle of May, highs typically range from the 60s and 70s in the mountains to the mid-90s in many desert valleys. On Saturday, Las Vegas, Nevada, soared to 96 F, while Albuquerque, New Mexico, reached 87 F.

Meanwhile, other cities saw the mercury climb even higher on Sunday, reaching well into the triple digits. Palm Springs, California, reached a high of 108 F, which is 13 degrees above normal for the date. Phoenix, Arizona, climbed to 105 F, which is only 2 degrees shy of the record for the date set in 1937.

The heat will continue to build through Monday. Not only will many locations challenge record highs, but some desert regions are also likely to experience the hottest conditions of the season so far.

In Phoenix, temperatures above 100 F are expected to last through at least Wednesday. Both Phoenix and Palm Springs peaked at 102 degrees during the first week of May.

In Texas, the unseasonably hot weather drove record demand through the state's power grid, prompting six power generation facilities to trip offline on Friday. The interim CEO of the Electric Reliability Council of Texas, Brad Jones, stated that Texans are asked to conserve power by setting thermostats to 78 degrees or above, among other conservatory measures.

Adding to that, storms that rolled through northern Texas late Sunday evening resulted in over 100,000 residents without power, according to poweroutage.us. Any power outages lingering into the afternoon hours could prove challenging for those trying access air conditioning and get some relief from the heat. 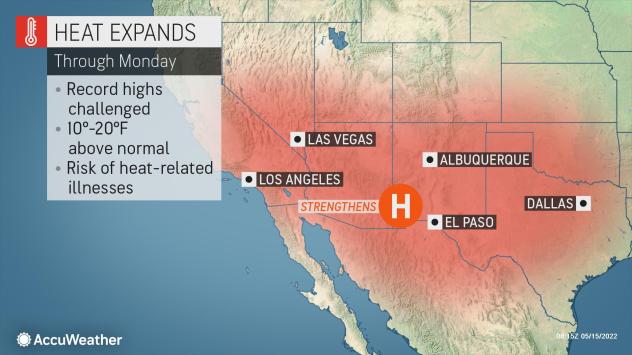 Even farther north over the Plains, heat surged to record-threatening levels. On Sunday, Oklahoma City's high of 93 F broke the daily record of 90 F set in 1966. However, a respite from the heat may occur to start the traditional workweek, with highs in Oklahoma City only rising to near-80 F on Monday.

The ongoing drought across the Southwest can be partially blamed for the severity of the heat. According to the U.S. Drought Monitor, 52 percent of Texas and 79 percent of New Mexico are under extreme or exceptional drought. In the Southwest as a whole, all areas are experiencing at least abnormally dry conditions. Thus far in 2022, the city of Midland, Texas has received just 11 percent of its normal precipitation through the middle of May, while Roswell, New Mexico has taken in only 17 percent of normal precipitation.

With very little moisture on the surface to evaporate, the dry ground can heat up quickly.

"Dry ground can add several degrees of temperature during the day, compared to wet ground," AccuWeather Senior Meteorologist Alex Sosnowski said, adding, "when there is no moisture in the ground, there is no natural cooling effect from evaporation."

In addition to the dangers posed by heat-related illnesses, the developing heat dome in the Southwest will also maintain a high fire risk in the region.

A disturbance, or dip in the jet stream, may quickly move through the area early this week. Under normal conditions, this feature might be able to produce locally drenching showers and thunderstorms. However, because of the lack of moisture in the air and evaporating from the ground, spotty thunderstorms that manage to fire up are unlikely to bring much, if any rainfall. Lightning strikes from the storms could spark new wildfires, due to the tinder-dry condition of the landscape.

Gusty winds may also occur as the disturbance zips through, which may hinder efforts to contain the ongoing fires in New Mexico, Arizona and Southern California, or cause new fires to quickly get out of control.

Forecasters say that any relief from the heat is unlikely to arrive quickly. The first chance of a meaningful pattern change with lower temperatures will not occur until very late this week. It is possible that the storm and dip in the jet stream late could do more harm than good, by stirring up winds and perhaps triggering mainly dry thunderstorms.

In the long-term, while there is some hope the annual North American monsoon will bring some much-needed rain and higher humidity levels this summer, wildfire conditions could get much worse beforehand as the heat continues to swell and the first thunderstorms from the tropical flow of air could spark even more fires.