The most vulnerable communities in New Mexico have been “devastated” by raging wildfire, and with no relief in sight many worry these fires will continue into the summer.

Hundreds of families have been ordered to pack up and leave as fires spread in the Southwest.

Towering plumes of smoke and pyrocumulus clouds can be seen from the New Mexico Capitol building in Sante Fe, and as the ongoing drought worsens, many fear this wildfire season will be like no other.

"We’re already in climate disaster mode across the planet, but in the southwestern United States, there’s no word to describe the danger of not having water," New Mexico state Rep. Roger Montoya told AccuWeather National Reporter Bill Wadell in an interview. "For the last 34 days, our communities have been devastated by these fires. They're catastrophic."

The Calf Canyon/Hermits Peak fire is currently in conditions that result in "extreme fire behavior and rapid growth," according to InciWeb, with conditions including strong winds, high temperatures and low relative humidity. In Albuquerque, New Mexico, approximately 60 miles southwest of Santa Fe, temperatures blasted up to 88 F Wednesday, with wind gusts pushing 45 mph and relative humidity in the single-digits. 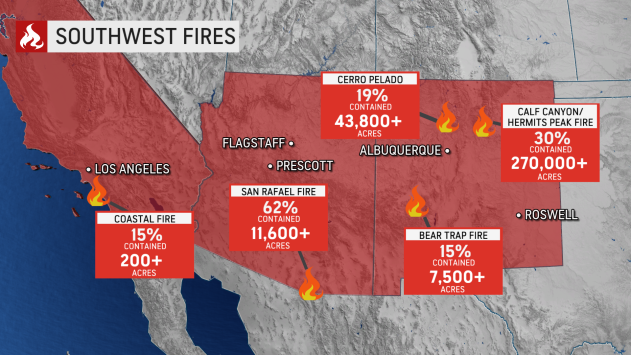 “Given the prognosis for continued wind and the historic dryness, it’s a nexus for catastrophic disaster. I shudder to think that the entire bottom of the Rocky Mountain range, the Sangre de Cristo Mountains, homes to our villages for hundreds if not thousands of years, when you talk about indigenous peoples, [is] burning completely," said Montoya. "It could go on for the entire summer.”

According to the most recent analysis from the United States Drought Monitor, more than 70% of New Mexico's population lives in an extreme drought area, which is a breeding ground for wildfires. Combined with the low humidity and gusty winds, the wildfire threat across New Mexico continues to grow. The National Weather Service (NWS) has been issuing daily reg flag warnings for a large swath of the Southwest as these brutal weather conditions continue.

AccuWeather Senior Meteorologist Randy Adkins said the conditions will improve somewhat in the coming days, but not due to the potential for rain.

"The strong winds which have led to rapid fire growth and extreme fire risk will gradually subside as we head into the weekend," said Adkins. "[But] it should be noted that humidity values will actually be lower Friday through the weekend, particularly for southern portions of New Mexico and Arizona, so the fire danger will certainly remain elevated."

Localized higher wind gusts could still spark rapidly growing wildfires, and as such, residents across this drought-stricken region should remain vigilant and take all necessary precautions to avoid accidentally igniting a fire, Adkins added.

Montoya said the fires are hitting some of the most vulnerable communities in New Mexico, threatening families with communication, mobility and economic challenges. One community, in particular, Mora County, which is just north of the city of Las Vegas, is among the poorest in the nation.

“Just making sure that people are getting timely information, accurate information is critical, and it has been problematic because the cell tower in Mora went out," Montoya said. “Rural communities in northern New Mexico and really across New Mexico are underprepared because we haven’t made a significant investment in water sanitation, in emergency generation of electricity and, of course, reliable cell coverage has been the starkest gap in keeping people safe."

As the fire threatens more communities, Montoya urges people to follow evacuation orders and not to return until it is safe to do so.

“There have been many, I’d say hundreds, who refused to evacuate initially," said Montoya. "Then they opened the road, so people came back to feed animals and take care of the only thing they have left on the planet and a place they loved for centuries. This is in their DNA, so I understand the context of defending your place valiantly. I get it. I don’t condone it because I want people to stay alive.” 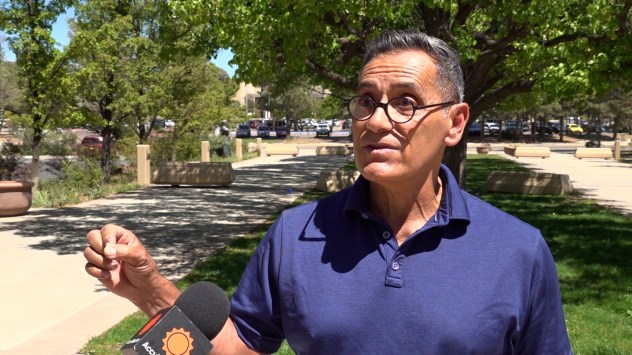 Montoya said more than 800 people are in nearby shelters, and the fires have destroyed at least 160 homes. More than 17,000 firefighters, support personnel and specially trained teams have been assigned to fight the blaze.

New Mexico leaders say they've already spent more than $60 million fighting fires so far this spring, and the cost is expected to grow even after the wildfires diminish.

New Mexico Gov. Michelle Lujan Grisham said the cost of reconstructing homes, preventing post-fire flooding, and restoring the forest charred by the fire would likely reach into the billions of dollars.

“When you think about rebuilding communities, it is not an overnight process,” Lujan Grisham told The Associated Press. “So we should be thinking in terms of significant resources and those resources, in my view, should largely be borne by the federal government given the situation.”

Farther west on Wednesday, a dangerous fire began burning on the California coast, triggering evacuations in the area of Laguna Hills. The Coastal Fire has burned through at least 195 acres as of Thursday morning, setting at least 20 homes ablaze in the Laguna Niguel area of Orange County. A view from Laguna Niguel shows the massive size of smoke clouds as a result of the fire:

According to the Orange County Fire Authority, the fire broke out between Laguna Niguel and Laguna Beach near a water treatment plant, quickly sending smoke into the sky and prompting first-responder action.