What are pyrocumulus clouds?

On May 8, a wildfire in Texas led to a very unusual weather event — a pyrocumulus cloud that ended up causing a thunderstorm cell.

But, what is a pyrocumulus cloud? Simply put, it is a cumulus cloud that is formed by hot air and smoke being released into the sky, usually during volcanic eruptions, or in Texas’s case, by wildfires.

According to NASA, the clouds are usually gray, black or brown. This is because of the smoke released into the air. They can be nearly 5 miles high.

Photos: What is a lenticular cloud?
What is a horseshoe cloud?
Photos: Ominous wavelike asperitas clouds loom over Chicago

They form similarly to cumulus clouds, which form because of rising air caused by the ground being warmer than the air. This causes moisture to form around particulates that are usually dust, according to AccuWeather Senior Meteorologist Jesse Ferrell.

There have been multiple sightings of pyrocumulus clouds around the country recently, including this one in Colorado on May 14.

New: lightning initiated wildfire well northeast of Arriba, CO 20 min ago! Tried to get closer and thankfully it was snuffed out by the rain/hail #wildfire @breakingweather @accuweather pic.twitter.com/cyOw0qKzE3

The main difference between pyrocumulus and normal cumulus clouds is that they form at a much more rapid rate due to extreme heating and condensation. According to LiveScience, air condenses rapidly as it goes up into the sky above the flames of the wildfire. While this is happening, burning plants on the ground evaporate moisture.

“When you add a wildfire, you get massive amounts of heat on the ground, and also a lot of particulates, clouds and later thunderstorms form from wildfires in environments which would not otherwise produce them,” Ferrell said. 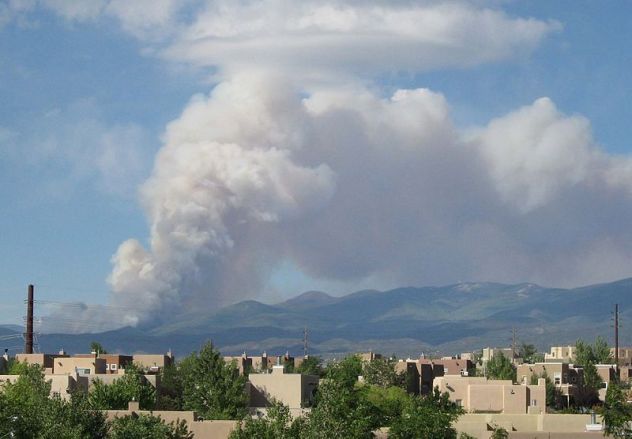 According to Ferrell, in some cases, the storms can actually put the fire they spawned from out due to prevailing winds and the rain from the thunderstorm.

“The International Cloud Atlas, which is the official source for cloud names, lists pyrocumulus as a nickname for a cloud caused by a wildfire – the cloud type is officially called ‘Cumulus congestus flammagenitus’ until it turns into a thunderstorm, in which case it becomes (officially) ‘Cumulonimbus calvus flammagenitus,’” Ferrell said.