Researchers stumbled upon the mysterious sprawling glyths, dating to the first millennium AD, in a chamber miles beneath the surface. It's the largest discovery of its kind in North America.

A cave in Alabama is home to the largest known Native American cave art. New technology has helped in finally documenting photographs of the artwork, much of which is in the dark.

May 5 (UPI) -- The largest known examples of North American cave drawings have been discovered in Alabama using a new identification technique, according to research published by Cambridge University Press on Wednesday.

The technique enabled "digital manipulation of the chamber space and revealing images that could not be perceived prior to modeling," according to researchers at the University of Tennessee, Knoxville.

Officially known as the 19th Unnamed Cave, the subterranean space in northern Alabama extends for miles beneath the surface through "predominately low, damp passageways," the researchers noted. Hundreds of carved figures are located on the ceilings. 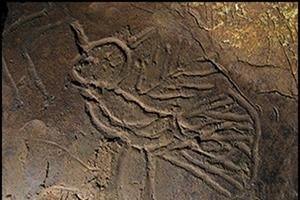 A drawing located inside the 19th Unnamed Cave in Alabama, where researchers confirmed on May 4, 2022, North America's largest cave glyphs have now been discovered, using a new 3D modeling technique. (Photo/Cambridge University Press)

Archaeologists estimate the carvings were made about 1,000 years ago by people living during the Woodland phase of the Native American culture in the region. Fog sometimes forms in the cave’s cool, damp air, and researchers believe this wet environment helped the artwork survive for so long.

The glyphs could depict spirits of the underworld and have been dated to the first millennium AD.

Photogrammetry is a software-based 3D modeling technique that begins by taking many photographs of a target. Each photograph overlaps its neighbor by 60% to 80%. Software then compares the images and overlaps, and then calculates the camera positions used to produce the images. 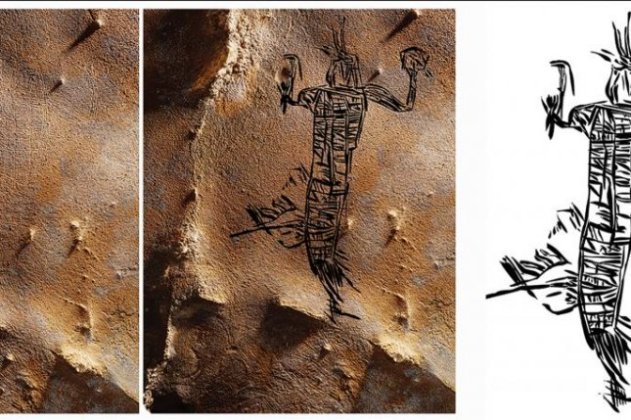 An image depicting the actual cave surface (left) and the final product (right) after the 3D modeling process which involves taking hundreds of photos to uncover the image below the surface. (Photo/Cambridge University Press)

In the 19th Unnamed Cave, scientists created three interlinked models. Two were of the engraved ceiling and a third model of the undecorated cave passages.

"We knew the cave contains precontact Native American mud glyphs, and we were carrying out a 3D photogrammetry documentation project to aid with management and conservation," said Jan F. Simek, a University of Tennessee, Knoxville professor and the study's lead author.

"The very large cave art images cannot be seen in person in the cave because of the constrained spaces on the site."