Chief Meteorologist Bernie Rayno breaks down the conditions that could potentially lead to tropical development in the Gulf of Mexico from May 20-25.

Any formation of a potential tropical system is still about a week away, but AccuWeather meteorologists were homing in on a traditional spring trouble spot in the Caribbean located near the coasts of Central America, Cuba and southeastern Mexico as the area where something could spring to life.

There has been some indication since the start of last week that a disturbance could form in the waters of the western Caribbean and wander northward into the southern Gulf of Mexico during the period from May 20-25. While that is rather far out on the forecast horizon, this zone holds some of the warmest water in the entire Atlantic basin with temperatures in the low to mid-80s F. 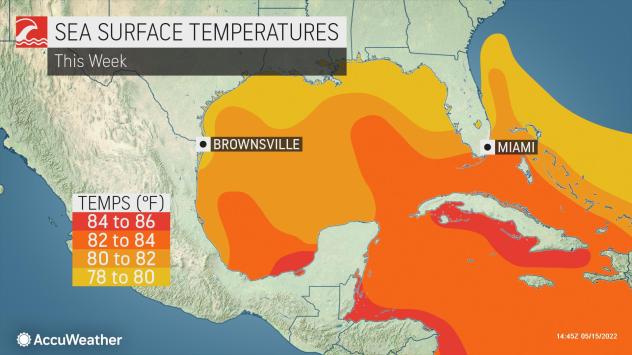 Water temperatures in this region are running up to a few degrees above average. The minimum threshold for tropical development is about 77 degrees.

However, it takes more than warm water to brew a tropical depression or storm. Sometimes, a disturbance (also known as a weak low-pressure area) can be enough of a trigger, but there are other ways tropical systems can take shape.

"A potential trigger can be a weak southward dip in the jet stream, and it appears that setup could develop late this week over the region," AccuWeather Chief On-Air Meteorologist Bernie Rayno said.

While proximity to the jet stream can bring an increase in disruptive wind shear, it can help draw moisture into the region, which tropical systems need to form and survive. 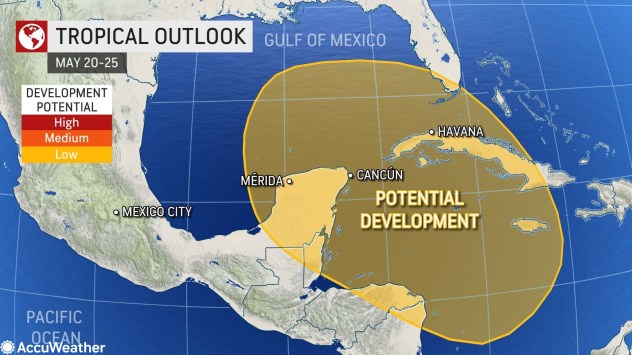 AccuWeather Lead Long-Range Meteorologist Paul Pastelok said the latest forecasts indicate that "the middle and upper part of the atmosphere look more favorable for development" than they initially did, but he cautioned that forecasters are also recognizing signs that conditions lower in the atmosphere could be more prohibitive for a storm to develop.

There is also the possibility that a feature known as the Central American Gyre may form. The gyre is fairly common during the summer and autumn seasons in the region.

This feature is a massive zone of weak low pressure that spins slowly over hundreds of thousands of square miles. While the gyre itself does not evolve into a tropical system, lower pressure within the feature, when combined with a disturbance, can be enough to spur tropical development. 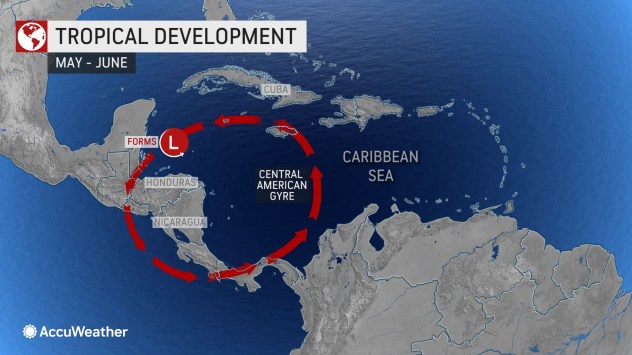 "The Central American Gyre does not happen as often in the spring versus the summer or autumn because the easterly breezes are not yet well established in the tropics," AccuWeather Hurricane Expert Dan Kottlowski said. "In rare cases, it can set up during April, May and June if the easterly flow sets up earlier than average."

There are many potential paths for any system that forms at this early stage, forecasters say. The possibilities range from a quick landfall over Central America or Cuba to perhaps a journey into the Gulf of Mexico, where shores from eastern Mexico to the Florida Peninsula could be at risk during the last week of May.

The longer the system spends over the warm Caribbean waters would increase its chances of gaining strength.

Despite the reasons given for potential development, AccuWeather meteorologists caution that there is no guarantee a tropical system will form, let alone reach tropical storm or hurricane strength. The zone will continue to be watched closely over the coming week.

If the named storm does take shape, it will be called Alex, according to the predetermined list of storm names for the 2022 season.

AccuWeather's team of tropical meteorologists has been cautioning about the risk of a preseason storm for 2022 in their Atlantic hurricane season outlook which was released in late March. Named tropical systems have developed prior to June 1 each year since 2015. May hurricanes, however, are very rare with only five such documented systems since 1863. One such storm was Hurricane Alma, which formed in the same region of the Caribbean that is being watched for development this month. 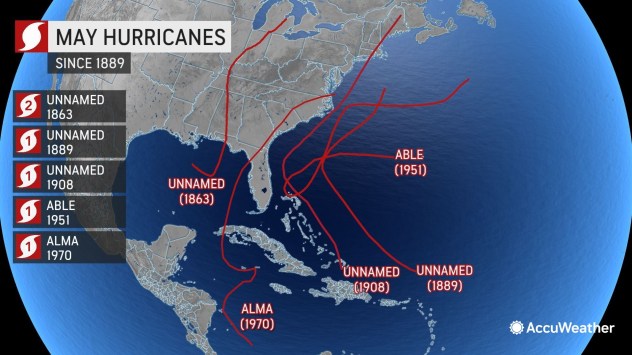 Elsewhere, an area of disturbed weather well off the coast of Central America over the Pacific Ocean could be a breeding zone for a tropical depression or storm this week.

The potential development zone for this Eastern Pacific feature is many hundreds of miles off the coast and such a system would be highly unlikely to affect land.