Total ‘Blood Moon’ eclipse to rise over US tonight

The moon will turn red during an eye-popping spectacle unlike any other in the night sky in 2022 -- as long as it isn't cloudy.

The moon will plunge into darkness this weekend to create a celestial spectacle that has not been seen in the sky over the entire contiguous United States since the turn of the decade.

Just as the sun sets over North America on Sunday evening, the sun, Earth and moon will begin to align to create a total lunar eclipse.

Folks may have to stay awake later than usual for a chance to see Sunday night's eclipse as it unfolds throughout the first half of the night. However, losing some sleep will be worth it as the eclipse could be the top astronomy event of 2022.

There was also an impressive partial lunar eclipse over the Americas on Nov. 19, 2021, when 97% of the moon went dark, but ultimately fell just short of being considered a total eclipse. 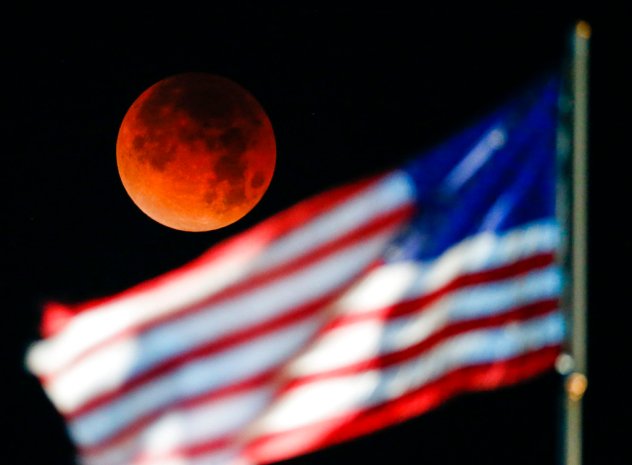 A total lunar eclipse is sometimes called a "Blood Moon" because the moon often appears to turn dark red at the height of the eclipse.

The eerie shift in color is not due to a transformation of the moon during the astronomical alignment, but rather a change in the light reflecting off the moon.

"During a lunar eclipse, the moon turns red because the only sunlight reaching the moon passes through Earth’s atmosphere," NASA explained.

"The more dust or clouds in Earth’s atmosphere during the eclipse, the redder the Moon will appear," NASA added. This dust could come from a variety of sources, such as wildfires or volcanic eruptions. 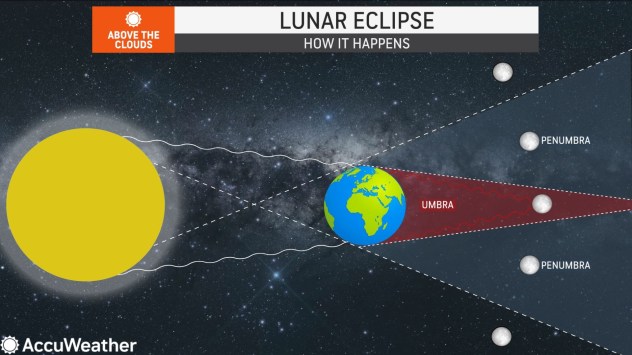 However, the total phase of the eclipse, when the moon changes color, will last only about an hour and a half, starting at 11:29 p.m. EDT and ending at 12:53 a.m. EDT. The middle of the eclipse will be the best time to look at the moon and will occur at 12:11 a.m. EDT.

The eclipse will begin before the moon rises over the West Coast, but luckily, the moon will climb above the horizon just in time for residents across the region to see it turn red. 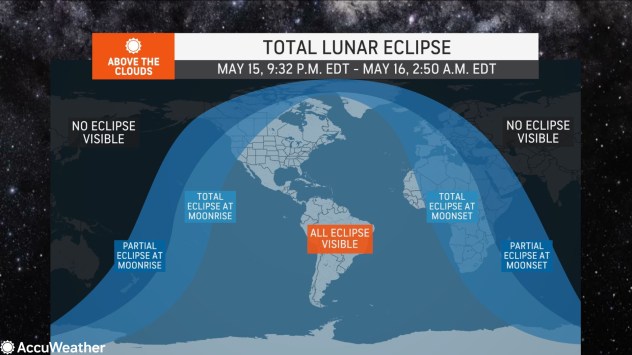 People in most of Canada, Central America, South America, western Europe and western Africa will also be able to see the lunar eclipse.

No special equipment is needed to witness the eclipse, but cloud-free conditions are a necessity. 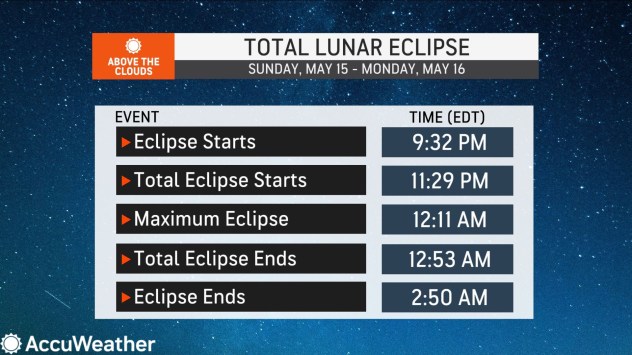 Clouds will be a concern for onlookers across most of the eastern U.S. and into Ontario, Quebec and Atlantic Canada. The exception will be in parts of the southeastern U.S. where cloud-free conditions should allow for great views of the Blood Moon.

The chances of seeing the eclipse are much higher across the central and western U.S. with partly to mainly clear conditions in the forecast on Sunday night. A similar outlook is predicted for the Canadian Prairies.

Meanwhile, clouds could spoil the show across the Pacific Northwest and into British Columbia, including Portland, Oregon, and Seattle metro areas as well as Vancouver, British Columbia. 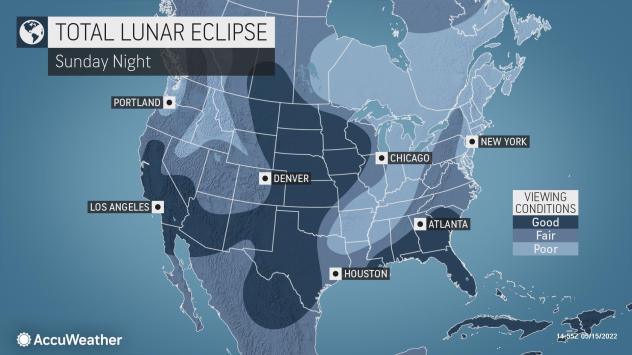 Unlike a total solar eclipse when you need perfect weather during the few fleeting minutes that the moon completely blocks out the sun, the total phase of a lunar eclipse lasts over an hour as the moon slowly passes through Earth's shadow.

This means that a single break in the clouds is all that is needed to catch a glimpse of Sunday night's event.

May's full moon is often nicknamed the "Flower Moon" due to the abundance of flowers throughout the month, according to the Old Farmer's Almanac. Some people are combining nicknames, calling this month's full moon the "Flower Blood Moon."

This weekend's highly-anticipated event will be the first of two opportunities to see a total lunar eclipse from the U.S. this year.

Another Blood Moon is set to rise over most of North America once again on Nov. 8, 2022. However, the moon will be setting across the eastern U.S. and Atlantic Canada just as the total phase of the eclipse begins. This means that people from Miami to Manhattan will only see a brief part of the encore eclipse.

After November, another total lunar eclipse will not be visible anywhere in the world until March 13, 2025.

While June, July and August will not feature lunar eclipses, each month will offer the opportunity to see a supermoon.